Capt. Jon Paul Hart dishes out food during a Thanksgiving celebration in Baumholder, Germany, home to soldiers of the 2nd Brigade, 1st Armored Division. The brigade, which just completed a round of training in the field, deploys to Iraq early next year. (John Vandiver / S&S)

Capt. Jon Paul Hart dishes out food during a Thanksgiving celebration in Baumholder, Germany, home to soldiers of the 2nd Brigade, 1st Armored Division. The brigade, which just completed a round of training in the field, deploys to Iraq early next year. (John Vandiver / S&S) 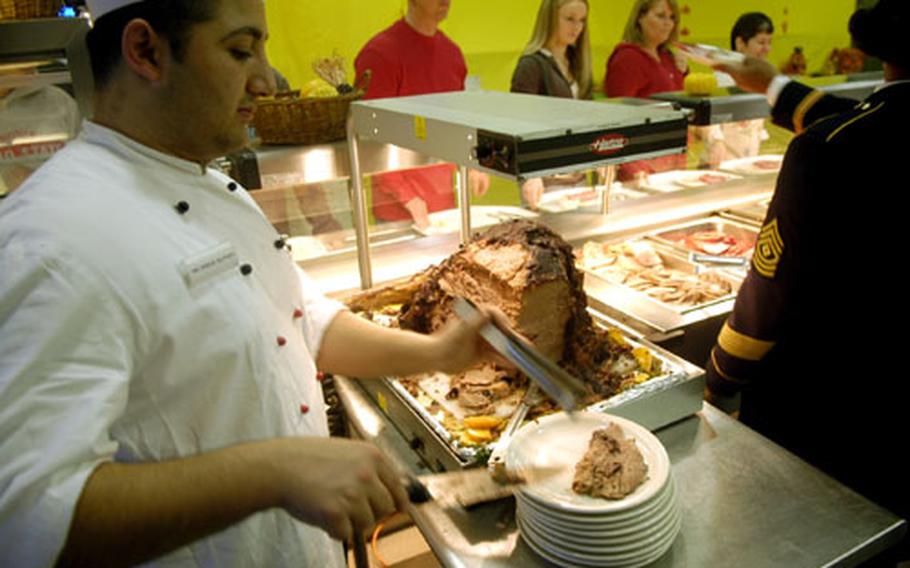 It wasn&#39;t just turkey on Thanksgiving in Baumholder, Germany. Here, a cook carves roast beef, which was served along with spare rib, ham and lobster. (John Vandiver / S&S) 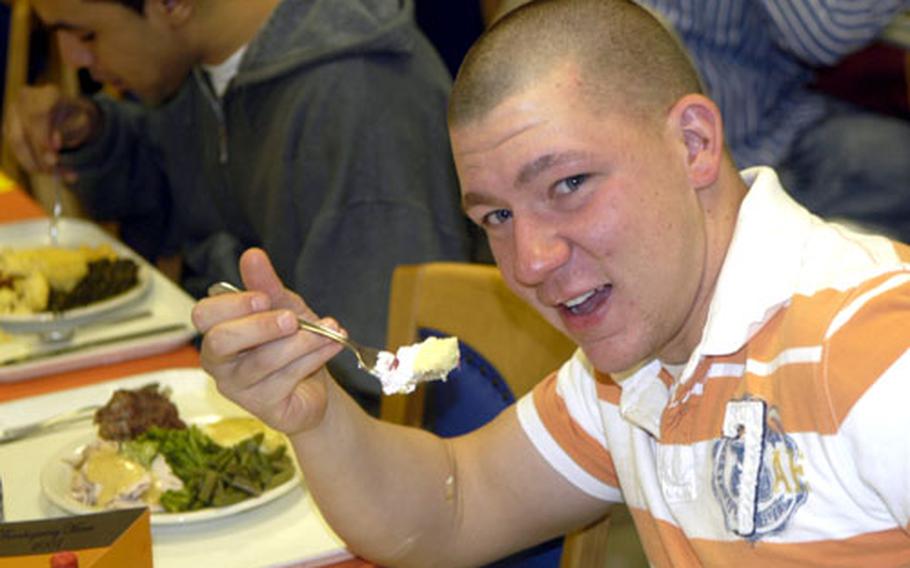 Spc. Seth Zencius didn&#39;t leave much room for dessert, but loaded up on cake anyway during his Thanksgiving meal in Baumholder, Germany. "That probably wasn&#39;t such a good idea," he said afterward. (John Vandiver / S&S) Sgt. 1st Class Ray Fleming, manager of one of the dining facilities at the Baumholder, Germany, base, enjoys a short break with his family before getting back to work. Fleming and his team spent a month organizing the feast. (John Vandiver / S&S)

BAUMHOLDER, Germany &#8212; A day earlier, Spc. Seth Zencius was iving out of a tent.

But by Thursday afternoon Zencius and some 4,000 fellow 2nd Brigade, 1st Armored Division soldiers were back in Baumholder, where a Thanksgiving feast was served up with all the trimmings.

Since October, the brigade has been busy training in Hohenfels as it gears up for a 2008 deployment to Iraq. It was a month spent in frigid temperatures and slopping through snow and mud. The training concluded Wednesday with soldiers making the long haul back to Baumholder.

The stay at home will be brief for many 2nd Brigade Combat Team soldiers. On Sunday, units will be departing again for a second round of training in Grafenw&#246;hr.

With so much time spent in the field, and a looming 15-month deployment to Iraq, soldiers who work behind the scenes said they had extra motivation to make this Thanksgiving meal a good one.

Sgt. 1st Class Ray Fleming, who manages one of Baumholder&#8217;s dining facilities, said the menu was the result of many hours of preparation.

Among the items cooked up Thursday: 20 roasted turkeys, 20 hams, and 300 pounds of shrimp. There was also prime rib, roast beef, lobster tail, gobs of stuffing and gravy and all the rest.

While soldiers lined up for the food, officers and noncommissioned officers worked behind the counter, dishing out the hefty helpings.

The scene was similar at the garrison&#8217;s other dining facility, which also served all the traditional Thanksgiving Day goodies.

Last week, Sgt. 1st Class Lester Powers was busy cooking in the field for hungry solders, managing the Thanksgiving preparations from afar. But he returned shortly before the rest of the unit to make sure things went off without a hitch.

&#8220;We wanted to make it as pleasurable for everybody as possible &#8212; someplace they could come and enjoy themselves,&#8221; Powers said.

From a &#8220;Kids Corner,&#8221; where children could play, to decorated cakes, ice sculptures, fruit baskets and traditional pilgrim scenes, soldiers logged long hours to get things right, he said.