Iraq-bound Marines get a taste of Morocco 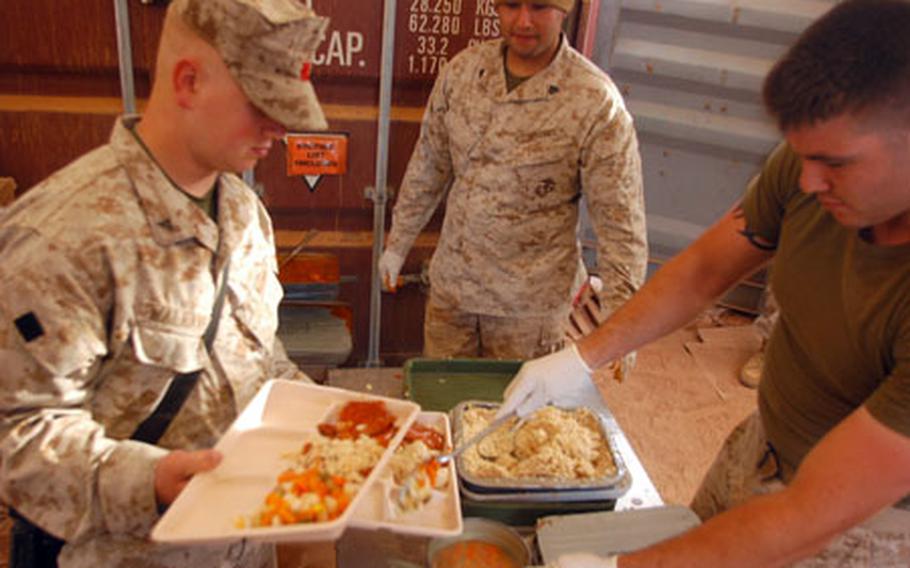 Then he answered his own question. Espinoza, the camp commandant at the U.S. portion of Cap Draa Training Area, said the training area is more realistic. Many of the Marines of 4th Logistics Support Battalion soon will be deploying to Iraq. And that ain&#8217;t California.

The logistics area for African Lion 07, a training exercise for the U.S. and Moroccan militaries, was surrounded by a dirt berm that had been bulldozed up, so the 10-acre area blended in with the desert and couldn&#8217;t be seen from the distance.

Yes, it could be Iraq. There was dirt and rock as far as the eye could see. Huge amounts of cargo had been transported from point A to point B. Unexpected problems cropped up that needed to be solved.

And outside the camp, there were men wearing dashikis and women in burqas.

The logistics unit had set up a security gate, dental clinic, helicopter pad and armory. There were heads and showers, and even a small gym for working out.

In a gap between cargo containers, and protected from the wind and blowing dirt, Lance Cpl. Matt Goldberg scooped hot country-captain chicken, rice and mixed vegetables onto food trays.

Inside a tent a short distance away, a medical area called the Forward Resuscitation Surgical System had been erected. There was enough here to save life and limb and to package up the wounded for transport, as well as treat lesser injuries.

Fortunately, through Saturday things had been quiet in the medical area, which allowed the U.S. and Moroccan medics to check out each other&#8217;s gear.

Navy Lt. Johnny Sacco, a registered nurse and anesthesist with 4th Medical Battalion, was impressed by an inflatable raftlike device the Moroccans use to stabilize patients with potential spine injuries.

He also noticed that the Moroccans had both a doctor and nurse on board their ambulances, which come outfitted with a sink with running water in case they need to wash up.

This was the first time that Lance Cpl. Jared Miller had left the United States. He will be among those deploying to Iraq, and was glad to have this training.

&#8220;As a group, I hope it helped us work as a team, helped with camaraderie and all-around friendship. It&#8217;s put my whole mind at ease about going overseas and deploying.&#8221;