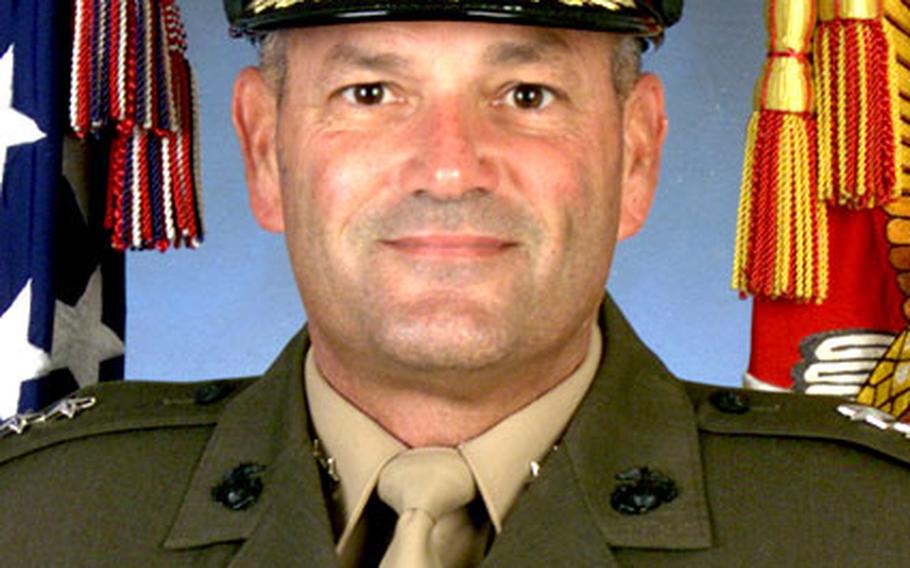 CAMP COURTNEY, Okinawa &#8212; The 3rd Marine Division&#8217;s commanding general, on his way to a tour in Iraq, wants to remind his Marines and sailors of how important their mission is in the Pacific Region.

Not everyone can be on the front lines, battling terror in Iraq or Afghanistan, Maj. Gen. Joseph F. Weber said Tuesday. But even thousands of miles from the fight, he said, his troops are vital to Asia-Pacific stability.

Weber, who&#8217;s leaving Okinawa on Friday and will report to Coalition Joint Task Force-7 in Iraq in March, said he&#8217;s sure everyone in the division would like to deploy with him.

&#8220;Everybody knows that every Marine and sailor in this division would like to have the opportunity to go to Iraq, because that&#8217;s where all the action on the ground is occurring with respect to the global war on terrorism,&#8221; Weber said. &#8220;But I go back to the issue of the importance of the theater cooperation plan and having Marines over here &#8212; command and control headquarters over here &#8212; a presence, because the global war on terrorism is global and it&#8217;s got to be controlled over here.&#8221;

Weber said the Asia-Pacific region has its share of &#8220;bad characters,&#8221; but by holding bilateral and combined exercises, the United States and its allies are letting them know to behave.

Weber said regional security is not compromised even though four units usually deployed to train on Okinawa have been targeted for an Iraq deployment instead.

He said the division feels the impact of the loss, but the young officers and staff noncommissioned officers have stepped up to the plate and met the challenge.

While losing the four units may have the appearance of spreading forces thin in the region, Weber said there is actually a positive side to it.

&#8220;That creates a great deal of training opportunities for other Marines back here, who can pick up and do other things,&#8221; said the 33-year veteran. &#8220;We have artillerymen in the 12th Marines acting as provisional rifle companies to continue on our exercises and our engagement activities. We have Marines in our [Headquarters and Service] Battalions and our companies who are stepping up and doing more tactically oriented things. So I can&#8217;t stress enough the importance of people stepping it up a level.&#8221;

Weber said he will face his own challenges when he reports to CJTF-7, including working with a coalition staff of 800 to 900 people.

Weber said he&#8217;s not too worried about his safety in Iraq.