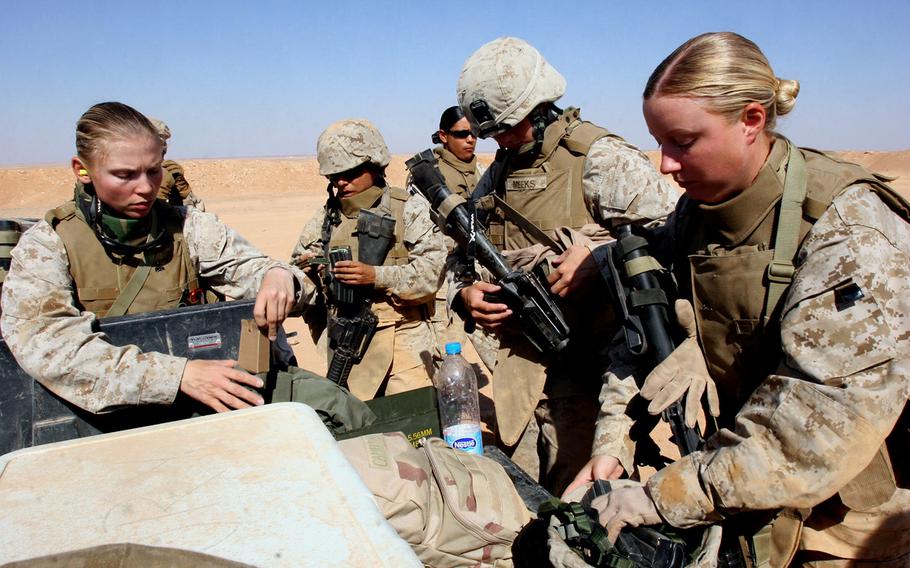 Marines refill their rifle magazines during the live-fire portion of their training at Camp Korean Village, Iraq, July 31, 2006. A group of Iraq and Afghanistan veterans have asked Veterans Affairs Secretary David Shulkin to “remove the outdated motto and replace it with an inclusive message and mission that acknowledges women veterans.” (Jennifer Jones/U.S. Marines)

Marines refill their rifle magazines during the live-fire portion of their training at Camp Korean Village, Iraq, July 31, 2006. A group of Iraq and Afghanistan veterans have asked Veterans Affairs Secretary David Shulkin to “remove the outdated motto and replace it with an inclusive message and mission that acknowledges women veterans.” (Jennifer Jones/U.S. Marines) 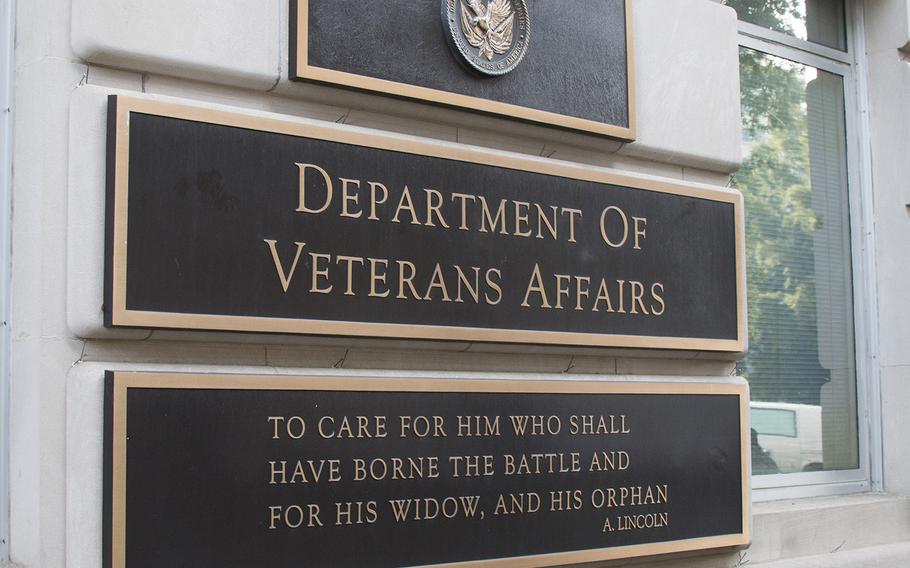 Buy Photo
The Abraham Lincoln quote, on a plaque on the VA's Washington, D.C. headquarters. (Stars and Stripes)

WASHINGTON — A group of Iraq and Afghanistan veterans is demanding the Department of Veterans Affairs change its motto, which they argue is sexist, outdated and exclusionary.

Iraq and Afghanistan Veterans of America, an organization with approximately 425,000 members, has advocated all year for expanded services for women veterans. The group renewed its efforts this week to challenge the VA’s motto by sending a letter to VA Secretary David Shulkin and appealing to lawmakers and other VA officials.

“IAVA’s top priority this year is increasing recognition and support for women veterans,” said Allison Jaslow, executive director of IAVA. “A key component of that has been asking for the VA to change its motto, and that’s because cultural barriers are arguably the biggest barriers veterans face. Far too many women veterans feel invisible.”

Since 1959, the VA motto has been a quote from former President Abraham Lincoln: “To care for him who shall have borne the battle and for his widow, and his orphan.”

The quote came from Lincoln’s second inaugural address in 1865, the same year Lincoln created the first-ever government institution for volunteer soldiers. Plaques inscribed with the quote now flank the entrance to VA headquarters in Washington and are located in many VA facilities.

In a letter to Shulkin on Tuesday, the group asked he “remove the outdated motto and replace it with an inclusive message and mission that acknowledges women veterans.”

In response to IAVA’s criticism of the motto, Curt Cashour, a VA spokesman, said, “VA has the utmost respect for the service and sacrifice of all veterans, including women veterans. But Lincoln’s words are Lincoln’s words.”

IAVA hasn’t suggested a motto to replace the quote, but Jaslow said a replacement would need to reflect the current population of veterans. According to VA data, more than 2 million of the 21 million veterans nationwide are women.

“If they want to get serious about changing the culture inside the VA, this is a great way to send a message that they want to be as inclusive possible,” Jaslow said.

In a survey of its membership, 73 percent of women who responded did not believe the public treats women veterans with respect. The survey results, announced last week, are based on responses from about 4,300 IAVA members.

IAVA and a bipartisan group of lawmakers introduced legislation in March that would require every VA facility to maintain one primary-care provider on staff who specializes in women’s health. It also calls for $20 million to be spent on retrofitting VA medical centers to provide more privacy for women veterans who are treated there.

Included in the bill is a measure suggesting – but not requiring -- Shulkin change the VA motto.

In its letter to Shulkin, IAVA wrote about other changes made to be more inclusionary of women in the military. In 2004, the Air Force Academy replaced its “Bring Me Men” sign on its stone entrance with “Integrity First. Service Before Self. Excellence in All We Do.” The original sign had been in place since 1964.

Also in 2004, the U.S. Naval Academy amended gender-specific lyrics of its school song. The U.S. Military Academy at West Point did the same in 2008.

“There’s precedent,” Jaslow said. “Culture change is hard, but it has to start at the top.”

Other major veterans organizations are not actively lobbying for the change. But Joe Davis, a spokesman for Veterans of Foreign Wars, said Wednesday that the VFW “welcomes the conversation.” Joseph Plenzler, a spokesman with the American Legion, said the organization doesn’t have a stance on the VA motto but “is committed to ensuring the many contributions of all our veterans from all walks of life are recognized.”

IAVA will continue pushing for the motto change in the weeks leading up to Veterans Day on Nov. 11, Jaslow said.