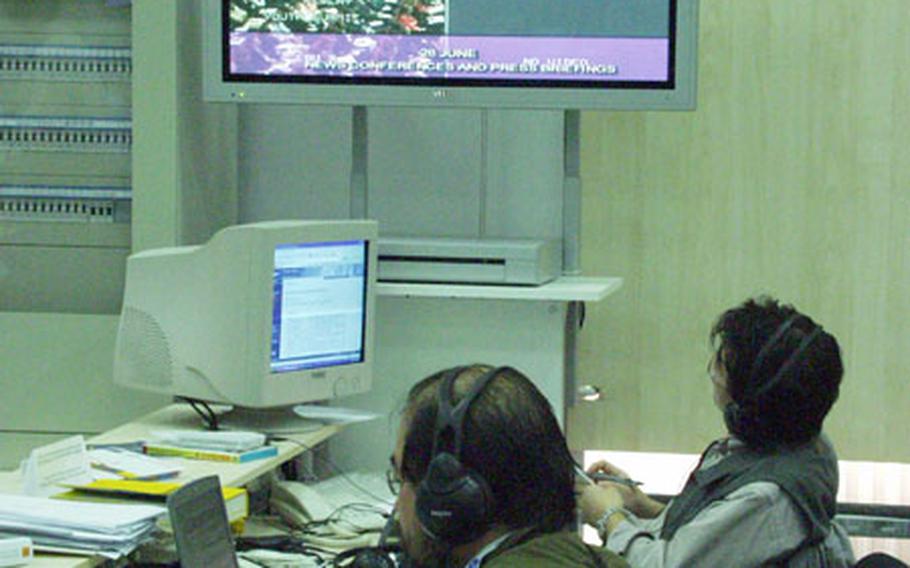 An international mix of reporters and photographers wait — chain-smoking and some comforted by a morning beer — for NATO to announce the results of deliberations during the Istanbul Summit on Monday. (Ward Sanderson / S&S)

More forcefully, the council used the Istanbul summit to announce it would significantly boost peacekeeping in Afghanistan.

Leaders of the 26 NATO member states also gave Bosnia-Herzegovina its expected adieu, with NATO planning to turn peacekeeping there over to the European Union by year&#8217;s end.

And the council said it would open a loose dialogue with willing countries of the Middle East, and vowed to beef up naval counterterrorism operations in the Mediterranean, with possible help from Russia and Ukraine.

The impression of the council&#8217;s 14-page communiqu&#233; was one of resolve. After a year of diplomatic strains over the war in Iraq, NATO declared it was not only alive, but ready to kick.

&#8220;In facing the security threats and challenges of the 21st century, allies will stand together,&#8221; Secretary General Jaap de Hoop Scheffer said. &#8220;... NATO will remain the indispensable instrument to defend our freedom and security.&#8221;

The reality may be more nuanced.

The Iraq statement, announced just a few hours after a surprise handover of sovereignty to Iraqis from the U.S.-led coalition, won&#8217;t necessarily result in the NATO flag flying in Baghdad. But it does give momentum to NATO training locals, although possibly outside of Iraq &#8212; a stipulation apparently demanded by some states loath to deploy inside a newborn nation prone to explosive tantrums.

The council seemed clearer on Afghanistan. It assigned a total of 10,000 troops to the International Security Assistance Force, which is now 6,500 strong, to secure the country&#8217;s first free elections scheduled for September. The troops will establish four new provincial reconstruction teams complementing the one NATO now runs in Konduz.

Britain, Norway, Finland and Germany will man the new PRTs, which will all be based in northern Afghanistan. The U.S.-led coalition currently maintains another 13 in the country.

The expansion means NATO is proceeding with plans for a counterclockwise sweep across the desolate nation, and may soon move west &#8212; what one official called a &#8220;hub-and-spoke model.&#8221;

En route to Kabul on his jet last week for inspections and briefings, the commanding general of NATO described just such a web progressing by late summer.

In addition to reconstruction, NATO will establish a new rapid response team in Herat, where about 70 U.S. soldiers now man a PRT. A NATO official was unable to say what relationship the NATO team would have with the U.S. mission.

The news will likely relieve troops there, who are also responsible for more perilous provinces nearby.

&#8220;It&#8217;s the wild, wild West,&#8221; Lt. Col. James Hand, commander of the U.S. team in Herat, said over the weekend. He complained of government corruption, drug production and possibly two Taliban training camps in remote parts of his area.

The alliance&#8217;s defense ministers also decided to pursue a ground surveillance system similar to that of its Airborne Warning and Control System, or AWACS, platform. The alliance also announced a common interest in a theater missile shield and renewed commitment toward its NATO Response Force, an emergency army to deploy fast and light in times of crisis.

Though the council decided NATO will conclude operations in Bosnia, it will maintain its mission in Kosovo. When asked whether having Bosnian war crime suspects Radovan Karadzic and Ratko Mladic at large sabotages the mission&#8217;s success, the senior official said the responsibility for their capture was that of local authorities, not NATO.

The secretary general later expressed a hope that they would still face justice.

Outside the locked-down summit compound, Istanbul was tense. The sky shuddered with F-15 fighters during Bush&#8217;s weekend arrival. A NATO press officer said some Turks living &#8220;within shooting distance&#8221; of the summit were forced to temporarily leave their homes.

The security isn&#8217;t surprising. According to news reports, some 40,000 protesters took to the streets over the weekend, some burning effigies of the U.S. president over the war in Iraq. Terrorists have also staged several attacks in Istanbul. A bomb hanging on an overpass hung with an anti-NATO slogan exploded Saturday. No one was hurt. On Thursday, a bomb aboard a bus killed four people and injured 21.

The security and the summit continue through Tuesday.