Iraq, Afghan war vets made a strong showing in election 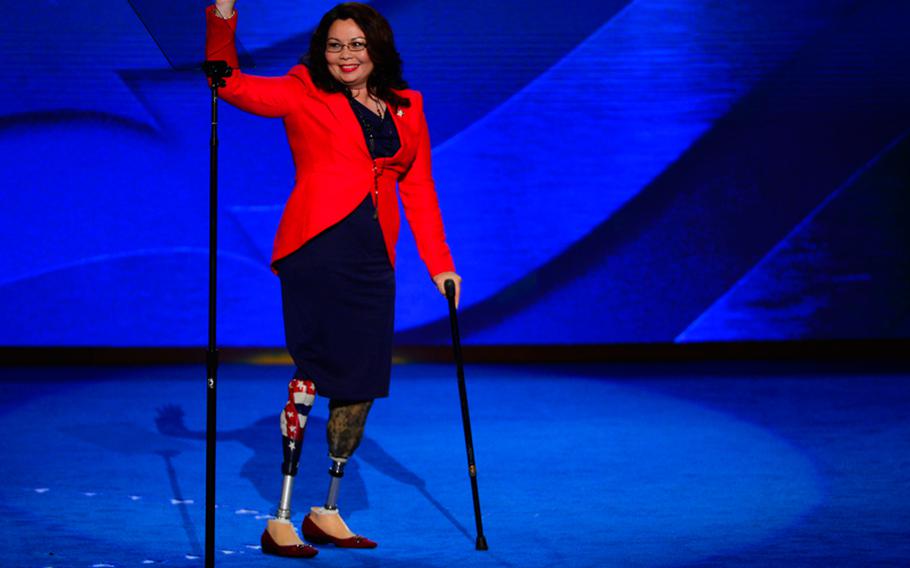 WASHINGTON - When the newly elected Congress is sworn in this January, a record number of Iraq and Afghanistan war veterans - and in particular, female veterans - will take another solemn oath to serve their country, this time in public office.

At least 16 Iraq and Afghanistan war veterans won House seats, as of Wednesday morning. None won in the Senate, although two races with veterans as candidates remain up in the air at press time. In 2010, 10 veterans won congressional seats, eight in the House and two in the Senate.

In addition, for the first time, women who served in Iraq will join Congress. Democrat Tammy Duckworth won a hard-fought battle for Illinois' 8th District House seat, after losing in 2010. One of the most visible veterans running for House races this year, she was a captain in the Army National Guard when she was sent to Iraq in 2004. As a Black Hawk helicopter pilot, she was one of the first women to fly combat missions in Iraq. She lost both legs in November of that year when her helicopter was struck but landed safely. Duckworth, 44, is the first Asian-American woman elected to Congress from Illinois.

Tulsi Gabbard, D-Hawaii, sailed to victory for the state's 2nd District House seat and became the first Hindu-American elected to Congress. She was a specialist with the medical unit of the The 29th Infantry Brigade Combat Team of the Army National Guard in 2004, and a military police platoon leader who deployed to Kuwait in 2008 to help train the country's counterterrorism unit. Gabbard, 31, pulled off a surprise landslide victory.

With many races too close to call the day after the election, it is uncertain whether the number of veterans will increase in the House for the first time in 32 years, as George Washington University's Center for Second Service had predicted.

Instead, the House will probably see "a comparable number" of vets, said Seth Lynn, director of the independent analyst group. That is important, he said, "because we've been losing about 10 vets in each election over the last few cycles."

In another high-profile contest, Sen. Scott Brown, a colonel in the Army National Guard, lost his bid for re-election to Democrat Elizabeth Warren in Massachusetts. Brown's loss leaves Lindsey Graham as the only Iraq War veteran in the Senate.

Iraq and Afghanistan veterans should be able to make more informed choices about military conflicts that will be part of foreign policy for years, Lynn said, as well as understand the specific consequences of military downsizing. With every veteran who gets voted into public office, Lynn said he believes there will be one more person willing "to put aside our differences and work together, for the good of the country."

War veteran winners in Election 2012At least 16 Iraq and Afghanistan combat veterans won House races, as of Wednesday morning. None won in the Senate.

At least 16 Iraq and Afghanistan combat veterans won House races, as of Wednesday morning. None won in the Senate.