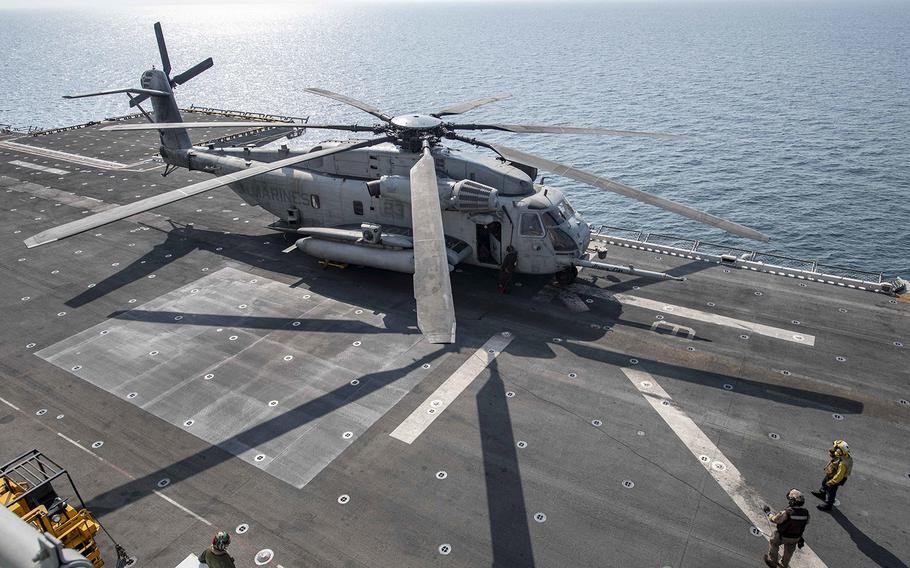 A CH-53E Super Stallion helicopter prepares for flight operations on the flight deck of the USS Essex in the Arabian Sea on Oct. 21, 2018. (Molly DiServio/U.S. Navy)

WASHINGTON – A pair of Iranian fast boats approached the USS Essex in the Persian Gulf on Friday as the top U.S. general in charge of operations throughout the Middle East visited sailors and Marines aboard the amphibious assault ship, Pentagon officials said.

The boats came within about 300 meters of the Essex while Army Gen. Joseph Votel, the Central Command chief, was aboard, according to a defense official. The boats from the Iranian Islamic Revolutionary Guard Corps Navy, showed no hostile intent toward the ship, which is under the control of the U.S. Navy’s 5th Fleet in the Central Command area of responsibility.

“Today’s interaction with U.S. 5th Fleet forces and the IRGCN was characterized as safe and professional,” Vice Adm. Scott Stearney, the commander of 5th Fleet, said in a prepared statement. “The U.S. Navy continues to operate wherever international law allows.”

It was not the first time Iranian boats have approached a warship that Votel was visiting in the area. In July 2016, the general was aboard the USS New Orleans, an amphibious transport dock, cruising the Strait of Hormuz when Iranian boats approached quickly in an aggressive manner.

Votel joked Friday about the Iranian fast boats, according to a report by The Associated Press.

“I really appreciate you arranging for the Iranians to be here,” the general told the ship’s crew, according to an AP reporter aboard the Essex with Votel. “… It shouldn’t come as a surprise that we have some Iranian interest today around perhaps one of the most significant ships we have in the [Persian] gulf right now.”

The Essex is carrying Marine F-35B Lightning II fighters from the 13th Marine Expeditionary Unit. Last month, the advanced, stealthy fighters launched airstrikes on Taliban targets in Afghanistan from the Essex, becoming the first to use the American F-35s in combat.

Tensions between the United States and Iran have tightened in recent months after President Donald Trump announced the United States would withdraw from the Joint Comprehensive Plan of Action, better known as the Iran nuclear deal, and reinstated sanctions on Iran’s economy.

Nonetheless, the Pentagon has reported zero unsafe or unprofessional interactions between American warships and Iranian vessels in the Persian Gulf in 2018, following years of such occurrences happening regularly.

Votel downplayed the prospect of armed conflict with Iran earlier this month.

“I don’t think we’re seeking to go to war with Iran, and I don’t think that’s what we’re focused on,” Votel told reporters at the Pentagon on Oct. 4.