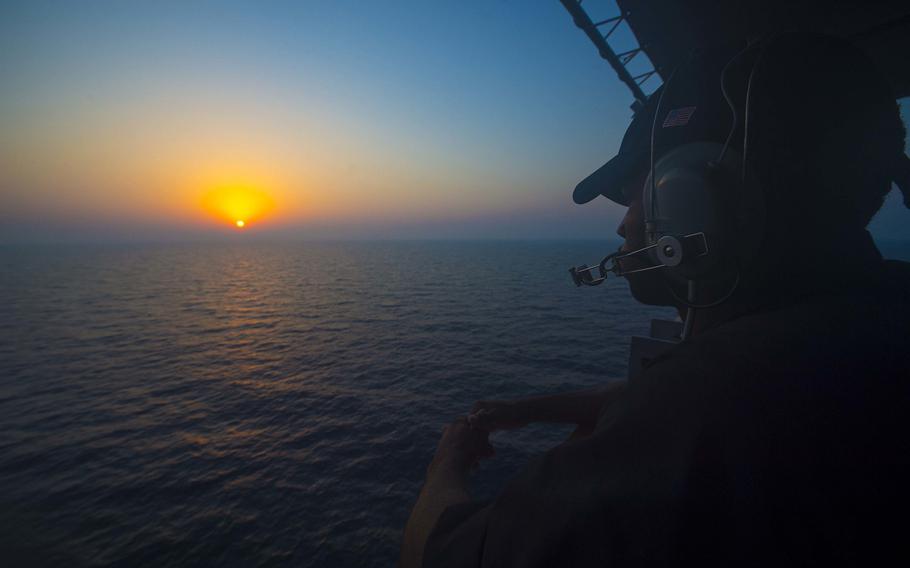 A U.S. sailor watches aboard the guided-missile cruiser USS Monterey on Aug. 30, 2016, while deployed as part of the Eisenhower Carrier Strike Group in the Persian Gulf. Navy assets in the region have seen an escalation of tensions with Iran. On Tuesday, Sept. 13, the Navy reported that Iran had threatened to fire on two U.S. Navy aircraft in three separate incidents last weekend. (William Jenkins/U.S. Navy)

The patrol aircraft, which Fox News identified as a P-8 Poseidon and an EP-3 Aries, were on separate routine surveillance patrols Saturday over the Strait of Hormuz, the southern entrance to the Persian Gulf.

“An Iranian Air Defense station challenged the two aircraft…informing them that that were flying near Iranian airspace, and if they did not change course immediately that ‘we will fire Iranian missile’,” said Cmdr. Bill Urban, a Bahrain-based Navy spokesman.

The two aircraft replied that “this is a coalition aircraft conducting routine operations in international airspace” and continued their respective missions, he said.

Neither aircraft was in danger because they were outside the known ranges for Iranian surface-to-air weapons, Urban said.

The incidents Saturday follow a series of recent run-ins with Iranian warships in the Strait of Hormuz. At its narrowest point, the strait is only 21 miles across, and Iran and pro-U.S. Oman claim the 12 nautical miles off their coasts as territorial waters.

The United States has cited the international right of innocent passage to send warships through the strait to escort commercial vessels after harassing incidents by Iran patrol craft.

On Sept. 4, patrol boats of the Iranian Revolutionary Guard harassed the USS Firebolt, a coastal patrol ship. In that incident, the Firebolt was forced to maneuver around one Iranian boat to avoid collision. In a late August incident, the USS Squall, another patrol ship, fired three warning shots at Iranian Revolutionary Guard ships as they harassed the U.S. vessel in the Persian Gulf.

However, at a news briefing Tuesday at the Pentagon, Lt. Gen. Jeffrey Harrigian, commander of Air Forces Central Command, said Iran has not interfered with U.S. air missions against the Islamic State group, but that its provocations have been “a continuing issue.”

In January, Iran captured 10 U.S. sailors in the Persian Gulf after the sailors allowed the two riverine command boats that they were sailing to drift into Iranian territorial waters. The sailors were detained overnight.