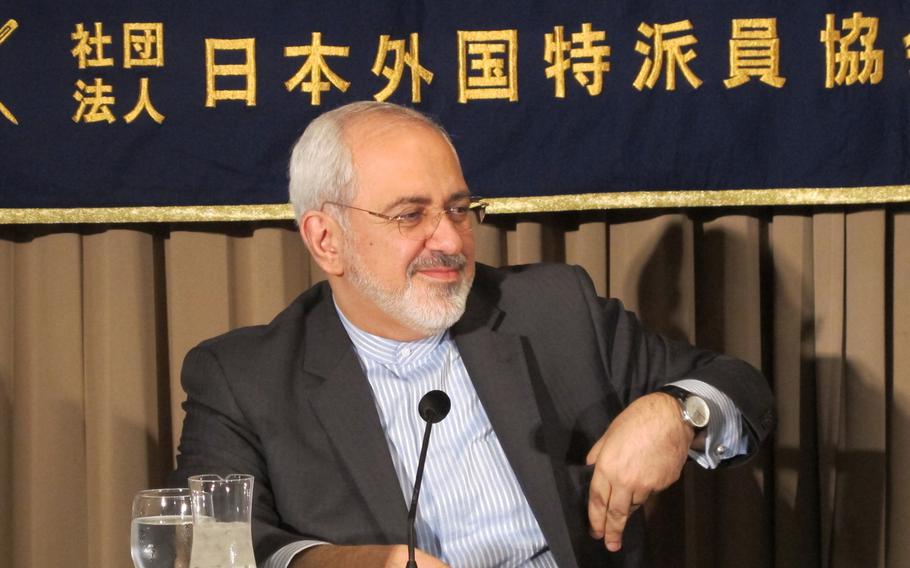 Buy Photo
Iran Foreign Minister Mohammad Javad Zarif talks with reporters at a press conference in Tokyo on Wednesday. Zarif said that Iran was ready to show the world transparency in its development of the commercial nuclear program. Zarif also said that the U.S. military role in the Persian Gulf increased the chance for miscalculation and violence in the region. (Erik Slavin/Stars and Stripes)

TOKYO — Iran’s foreign minister stressed that Tehran does not seek to weaponize its nuclear program, then questioned the continuing role of the United States military in the region during a meeting with reporters Wednesday.

Foreign Minister Mohammad Javad Zarif said even the perception that Iran was interested in a nuclear weapons program was detrimental to his nation’s security.

Last month in Vienna, Zarif and Iranian officials met with delegations with the five permanent members of the United Nations Security Council, plus Germany, and they agreed on a series of talks on ending the confrontation over Iran’s nuclear program.

Iran’s call for nuclear transparency has been met with hope from the U.S. administration, though some U.S. lawmakers continue to push for new sanctions on the regime. President Barack Obama has said he will veto any legislation containing new sanctions.

Zarif’s view of how the current nuclear negotiations came to be is at odds with those who believe that crippling economic sanctions brought Tehran to the negotiating table.

Furthermore, he said, the West was willing to change its approach because its system of sanctions failed to stem Iran’s nuclear progress.

He conceded that the sanctions had produced hardship on Iran’s people, but added that when the current round sanctions began, Iran had 200 nuclear centrifuges. It now as 19,000 centrifuges, Zarif said.

Skeptics of Iran’s engagement policy point to the massive centrifuge buildup as proof that Iran still wishes to retain the capability to produce weapons of mass destruction.

But, Zarif said that nuclear energy will allow Iran to use its vast oil resources to manufacture profitable petrochemicals. He added that a U.S. study dating to 1974 – before Iran’s Islamic revolution – recommended that Iran derive 20 percent of its energy from nuclear sources.

A secondary hurdle in the U.S.-Iranian relationship remains Tehran’s stance on freedom of navigation in the Persian Gulf and surrounding waters.

The U.S. maintains its Fifth Fleet headquarters in Bahrain, which lies about 140 miles from Iran across the Persian Gulf. Zarif said that in light of the results of U.S. military intervention in Iraq and Afghanistan, Washington should rethink its deployment of force throughout the world.

Zarif did not directly answer a question on whether Iran still considered the closure of the Strait of Hormuz — a narrow area where about 20 percent of the world’s oil is shipped through — to be a legitimate tactic in achieving its aims.

While discussing U.S.-led sanctions in 2011, Iranian media reported 1st Vice President Mohammad Reza Rahimi saying that, “If Iran oil is banned, not a single drop of oil will pass through Hormuz Strait.”

Zarif, however, did emphasize a desire to avoid conflict.

“The policy of this government is to try to bring the possibility of the need to resort to force to a minimum, both for us and our adversaries,” he said.

The Strait of Hormuz has a navigable area of about 20 miles across. Analysts at several Washington-based think tanks have reported that Iran in recent years has pursued an “anti-access, area-denial” strategy similar to that of China. They have stated that while Iran cannot match conventional arms in a standoff with the United States, it could attempt to use anti-ship missiles, anti-aircraft missiles and its large stockpile of sea mines to keep the U.S. from opening the international waters of the strait.

U.S. officials have previously stated that any attempt to close the strait would provoke a military response.