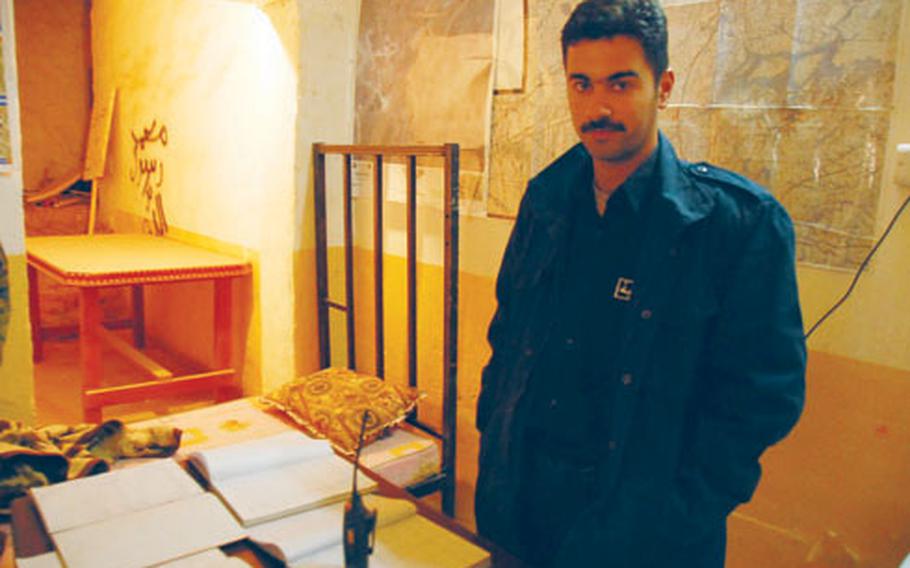 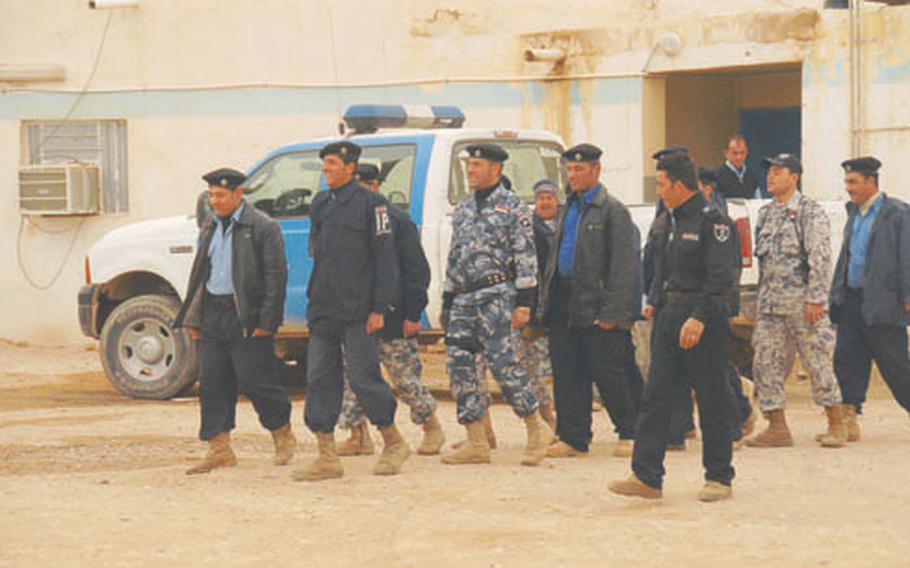 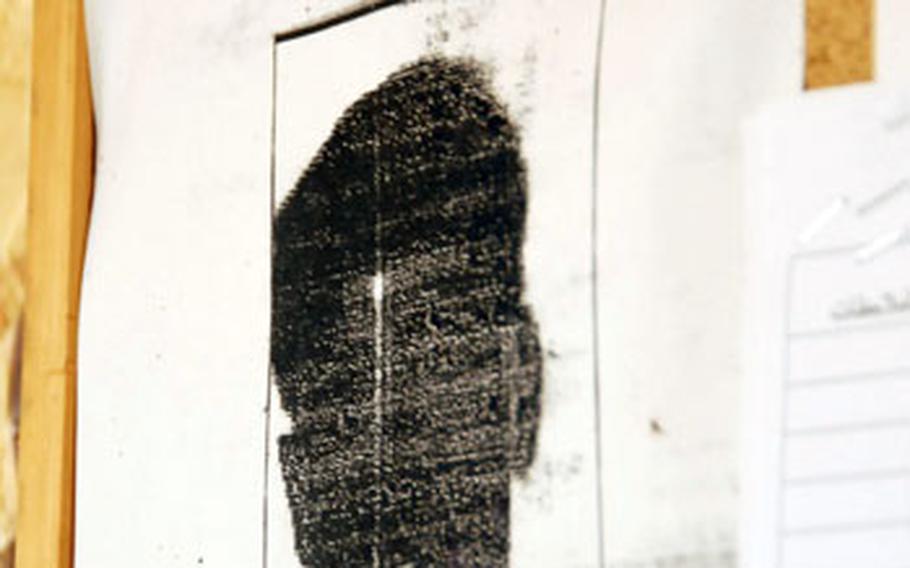 A wanted poster hangs on a bulletin board at a police station in Rutbah. The poster has a written description of an insurgent, but no photo. ()

RAMADI, Iraq &#8212; As a dozen North Ramadi city council members sat inside the narrow meeting room, sipping hot cups of sweet chai while the electricity flickered on and off, Rahim Khalaf Mohammed al-Aethowi said he was worried about a demonstration being held in the city that afternoon.

Al-Aethowi, the council&#8217;s vice president, wasn&#8217;t afraid that the demonstrators, who planned to protest the results of January&#8217;s provincial elections, might get violent. He was worried about the police.

In particular, al-Aethowi believed that some of the Iraqi police, or "IPs," were taking bribes from the government.

"Maybe they try to punish anyone who says bad things about the (election) results," he said. "That&#8217;s why we need the Americans. We need people to protect us from them."

But Capt. Dallas Shaw, a U.S. Marine liaison to the council, told al-Aethowi that the police weren&#8217;t there to take sides. They were there to protect the demonstrators.

"You say neutral. How can we find neutral IPs here?" al-Aethowi said.

He said some of the IPs are good but the organization is young and still unprofessional. Many U.S. troops in Anbar, the largest and once one of the most violent provinces in Iraq, say the capabilities of the IPs are slowly but steadily improving. But they say many of the police are undisciplined, and they suspect there are insurgents in their ranks.

It&#8217;s a worry throughout Iraq &#8212; evidenced by last week&#8217;s attack in Mosul in which men in Iraqi police uniforms killed an American soldier and Iraqi interpreter.

The police&#8217;s skills vary wildly from station to station, and often depend on the discipline of their leaders, some of whom have little police experience but rose to power because of their role in fighting al-Qaida in Iraq.

The biggest challenge for the IPs now, some Marines say, is learning how to be police.

Before they went on patrol in the tiny desert city of Rutbah, Gunnery Sgt. Richard Moriarty gave the Iraqi police a single instruction: Don&#8217;t shoot at cars unless you have to.

A few days later, at a city council meeting in Ramadi, a councilwoman complained that Iraqi police had blasted about 50 rounds into the air the previous afternoon at a busy road.

In Anbar, police have traditionally relied more on AK-47s than traffic tickets to get rid of traffic jams. And for the last few years, the fledgling Iraqi police force &#8212; which in some places developed out of citizens who banded together to fight insurgents &#8212; has been more of a militia than a law enforcement organization.

While their methods may seem haphazard, if not downright dangerous, they have helped maintain security gains in the region, said Shaw, commander of Weapons Company, 2nd Battalion, 9th Marines.

"It&#8217;s exactly what the Old West was like. The best law enforcement officer in the Old West couldn&#8217;t have solved a crime, maybe, but they kept stuff from happening," he said.

So far, not all of their efforts have been successful.

In December, a police station in Ramadi was overrun by 12 detainees who had stored weapons and used them to overpower the guards. The detainees killed six police officers and wounded several others. Most of the detainees were caught before daybreak, and the rest were caught within a few days, Shaw said.

There are bright spots. In Rutbah, a city of about 20,000 near the Syrian border, the Iraqis are quickly learning how to conduct investigations and take forensic evidence including fingerprints, which are still so new in Iraq&#8217;s legal system that many judges won&#8217;t accept them in court.

Detainees in the one-room detention facility are treated well, although debtors and other lesser criminals are housed with more serious offenders, including terrorists. Police are keeping better written records of arrests and learning to identify neighborhoods that need to be patrolled by sticking pins in maps after a crime.

"They&#8217;ve got a pretty solid grasp on the basics," said Capt. Travis Post, of Rutbah&#8217;s Police Transition Team, which works with four police stations in the area.

A lack of trust

But in Rutbah, interactions at the stations are marked by a lack of trust &#8212; between Iraqi officers at different stations, who often won&#8217;t share information with each other, and between the Americans and the Iraqis. The Marines don&#8217;t even tell the Iraqis when they&#8217;re visiting each police station.

Moriarty, also a member of the Rutbah PTT, said the police are more likely than Americans to be shot by snipers or attacked by suicide bombers.

"A lot of the IPs are former insurgents. [The insurgents] are letting them know they haven&#8217;t been forgotten," he said.

Sgt. Lucas Gleason said the insurgents target the IPs in part because they don&#8217;t want to provoke the Americans.

Lt. Col. Abdul Razaq, Rutbah district chief of police, said there are no insurgents in his police force, mostly young men who joined because they needed money.

In Ramadi, Col. Ahmad Hamid Sharqi, head of the North Ramadi precinct, said his police are not insurgents. Most of them joined after the insurgency died down because of the paycheck &#8212; about $600 a month, double what teachers and some other workers in Iraq earn. He now has twice the number of police officers he needs.

IPs sometimes accuse one another of being insurgents, but usually those claims are unfounded, said Lt. Col. Thad Trapp, commander of the 2nd Battalion, 9th Marines.

"In almost every case, it was grudge reporting," he said.

Post said he didn&#8217;t know whether any of the IPs in Rutbah had ties to the insurgency.