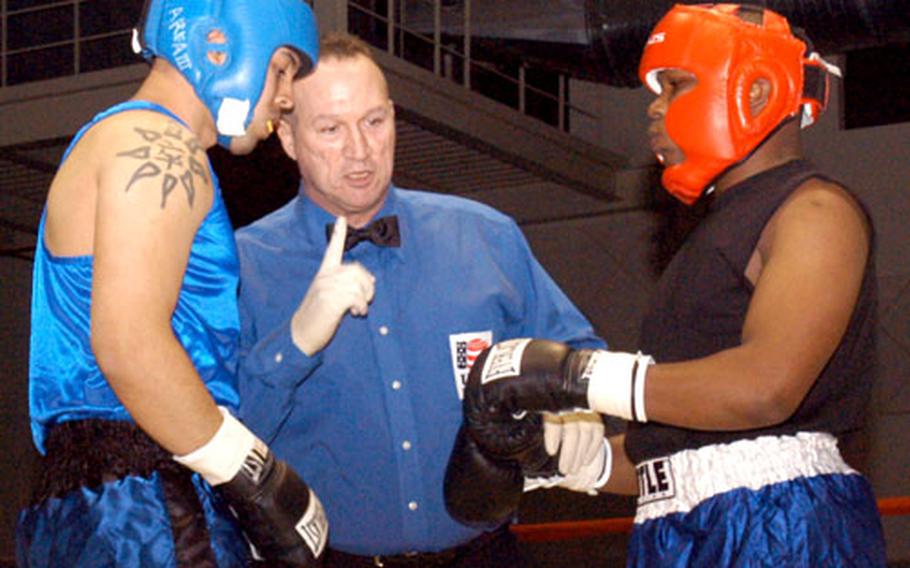 &#8220;I&#8217;ve already talked with my guys to coordinate with their Area IV sports director and get them in the loop &#8230; and then &#8230; get them to work with the other sports directors, especially with Area III,&#8221; Plumley said Tuesday. Area III is headquartered at Camp Humphreys in Pyeongtaek.

Plumley said he hoped the sports directors could put together a coordinated program that would mount tournaments on a regular basis bringing together fighters from a variety of installations.

&#8220;It is open to any U.S. military personnel,&#8221; Plumley said. There is nothing to prevent anybody from the Air Force, Navy or Marines from participating, he added.

Indeed, on last Saturday&#8217;s card were three airmen, two from Kunsan Air Base and one who works at Camp Humphreys.

Light Welterweight (132-140 lbs.): Senior Airman Michael Limiac of Kunsan Air Base, over Spc. Kevin Garcia of Camp Carroll, RSC at 1:25 of the first round.

Spc. Alan Quartey of Camp Walker over Spc. Jason Gonzales, both of Camp Carroll, RSC at 1:20 of the first round. Quartey is reigning 8th U.S. Army heavyweight champion and a recent All-Army Boxing semi-finalist.