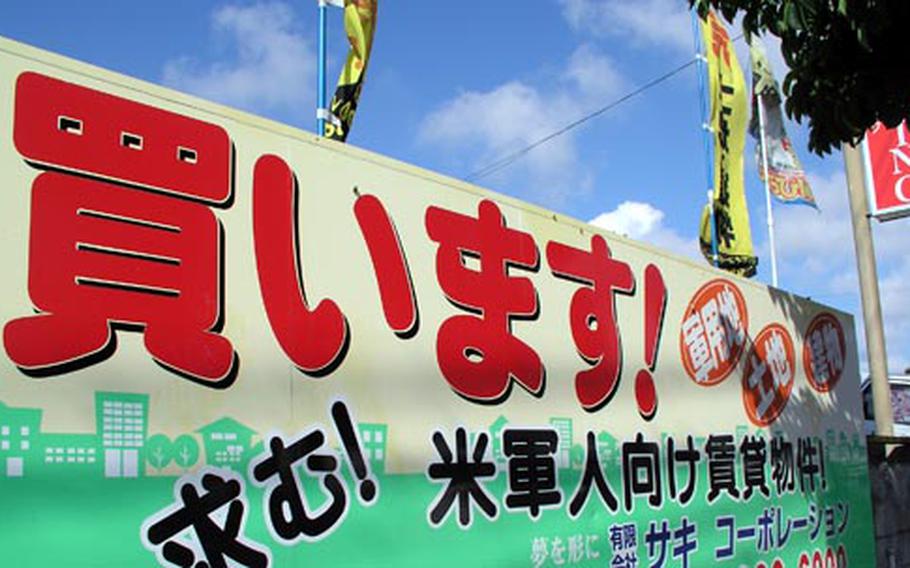 This sign posted in front of a realtor office near Kadena Air Base reads; “Buy – military land, land and buildings.” (Chiyomi Sumida / S&S)

This sign posted in front of a realtor office near Kadena Air Base reads; “Buy – military land, land and buildings.” (Chiyomi Sumida / S&S) 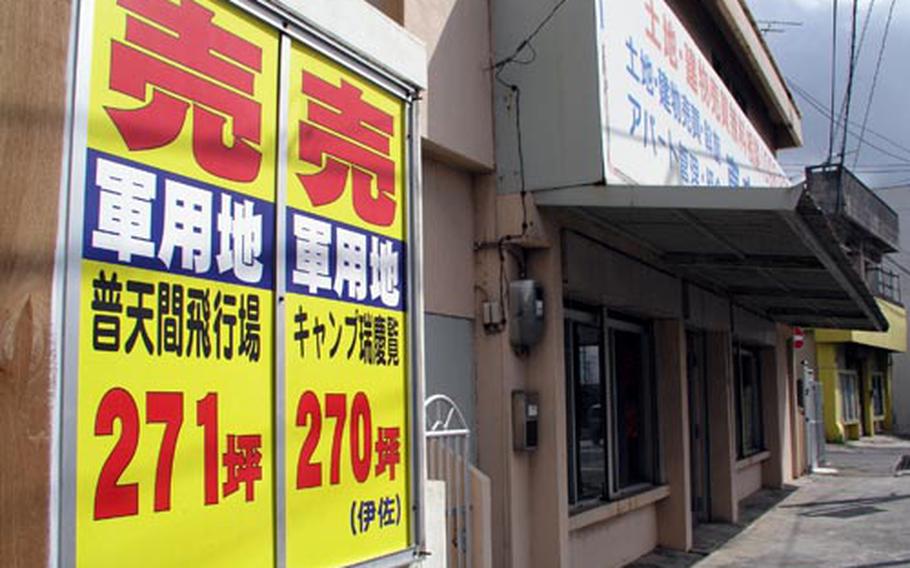 Signs posted outside a realtor office in Ginowan advertise two military land for sale: about 9,620-square-foot of land on Marine Corps Air Station Futenma and about 9,590-square-foot of plot on Camp Foster. (Chiyomi Sumida / S&S)

CAMP FOSTER, Okinawa &#8212; In a country like Japan, where available land is scarce, real estate can be a lucrative investment. And military land is no exception.

More than a third of the 57,580 acres of military land on Okinawa is owned by individuals, according to the Okinawa prefectural government.

The government of Japan paid about $706 million in rent in 2006 to 33,309 individuals and municipal governments.

Masami Kiyan, a sales representative of Big Kaihatsu, one of many Okinawa real estate agencies that deal with military land transactions, said his firm frequently receives inquiries from prospective buyers.

Although the rent from their ancestral land is a stable income, from time to time some owners must sell their land on military bases, Kiyan said.

"Some people need money to build their homes, while others need to pay inheritance tax," he said.

That&#8217;s when the business opportunity to buy base property expands to outsiders. "The rent income is much more than the interest that banks offer," he said. Also, base properties do not require constant upkeep by the owner.

To make it even more attractive, the rent goes up every year, he said.

According to data released by the Okinawa prefectural government, the rent that the Tokyo government paid to military landowners on Okinawa increased by 23.2 percent in the past 10 years, rising from $573 million to $706 million.

The eager investors vary, Kiyan said, from people barely in their 20s to retirees in their 60s, and can include people from mainland Japan who know little about Okinawa.

The most popular military acreage is where the return of a base is unlikely in the foreseeable future, Kiyan said.

For example, a 4,550-square-foot plot of land that is part of a runway on Kadena Air Base is for sale for about $173,000, Kiyan said. He showed a flier featuring an aerial picture of the runways with an arrow pointing to the plot.

About two years ago, a man in his 60s purchased a 2,160-square-foot plot located near the runway at the air base, Kiyan said.

"He said he decided to buy the land to give it to his children as an inheritance, because it is much better than leaving them with cash," he said.

Although Futenma and Camp Kinser are slated to be closed in the future, investors are buying property, anticipating development projects once the U.S. military moves out.

It&#8217;s no surprise that people see military land as a good investment, said Moritake Tomikawa, an economist and president of Okinawa International University in Ginowan.

Military-related income is one of the island prefecture&#8217;s three major revenues, ranking behind subsidies from the national government and tourism, he said.

And income from the bases continues to increase, especially rental income, Tomikawa said.

"Rent evaluation on military land is not based on the market price, which continues to drop because of Japan&#8217;s slow economic growth," he said. He explained that a 10-square-foot piece of land in Naha&#8217;s central area was valued at about $2,136 in 1998 but dropped to about $1,336 in 2006. In the meantime, he said, rental income paid by the Japanese government for base lands continues to increase.

Another advantage of investing in military land is financial turnover.

"With the big demand, it is easy to resell the land whenever they want, which is a great advantage for investors," Tomikawa said.

There is also a tax benefit to owning military property.

"The taxable value of property on military land is set low because no commercial use or development is available as long as it serves as a military base," Tomikawa said.

However, the trend of buying military base property as investments could hamper development when the bases are closed, he warned.

"In the future, when the land is returned, it might overshadow the development processes," Tomikawa said, pointing out that the number of base landowners is increasing, dividing it into smaller pieces.

"The more owners, the harder it is to obtain a consensus among them on any development project," he explained.

But for now, real estate agent Kiyan said, owning base land is as popular as the bases themselves are unpopular to many in Okinawa&#8217;s political picture.

"Many people object to the noise and safety issues posed by the bases, and there is a strong anti-base movement on the island," he said. "But behind the protesters, there are people who hope the land is not returned."