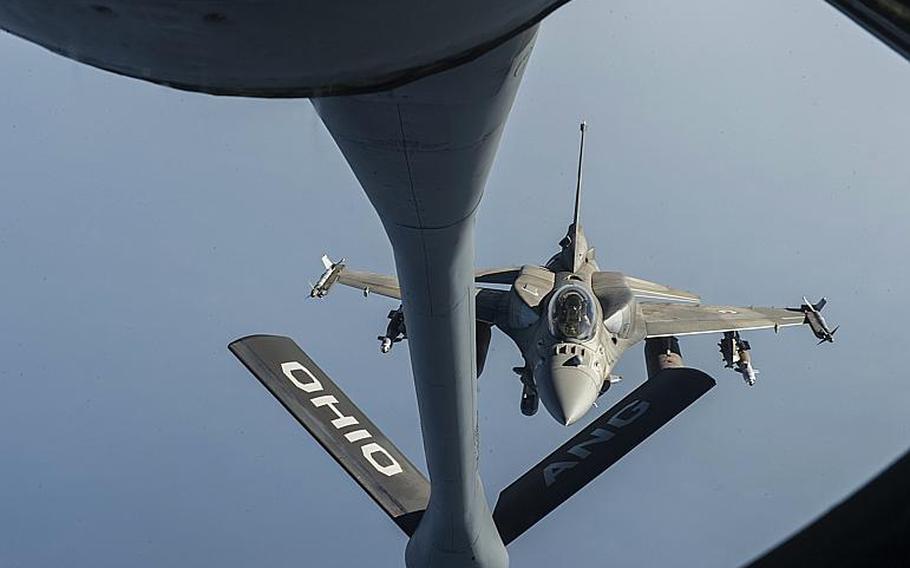 A United Arab Emirates air force F-16 Desert Falcon approaches a U.S. Air Force KC-135 Stratotanker for aerial refueling over Iraq Dec. 9, 2016. The Pentagon has announced it will audit refueling missions in the Africa and Central Command theaters following a report showing that U.S. missions to refuel U.A.E. and Saudi Arabian aircraft had not been properly accounted for. (Courtesy of Matthew Fredericks/U.S. Air Force)

STUTTGART, Germany — Defense Department investigators will launch an audit of refueling missions in the Africa and Central Command areas of operation to determine whether the military is getting paid back for supplies provided to local partners.

The upcoming Inspector General probe, announced Monday, follows recent revelations about accounting errors that resulted in failures to properly bill Saudi Arabia and the United Arab Emirates for refueling missions that supported the Saudi-led coalition in fighting in Yemen.

In December, the Pentagon said it would seek a $331 million reimbursement for those missions. Now, the IG appears concerned that billing irregularities could be more widespread.

In a letter to U.S. Africa Command, CENTCOM and the Defense Logistics Agency, the IG said the objective is to determine whether the military is getting fully reimbursed for refueling missions. It will conduct audits in Stuttgart, Tampa, Fla., and Manama, Bahrain.

While the U.S. decided late last year to cease refueling Saudi aircraft involved in missions in Yemen, the military has a long history of providing fuel support to partners in Africa and across the Middle East.

In recent years, the U.S. Air Force has routinely provided air-to-air refueling for allies in support of operations against the Islamic State group in Iraq and Syria. It also provides extensive support to the French military in Africa.

Since 2013, Air Force units have regularly deployed in support of Operation Juniper Micron, which supports French counterterrorism operations in western Africa. KC-135 Stratotankers are typically positioned in Spain for rotations to Africa.

French counterterrorism efforts in Africa are centered around Mali and Niger and are focused on disrupting the flow of Islamic militants in the region. French Mirage fighter planes were part of the emergency force that responded when U.S. troops came under attack during an October 2017 ambush in Niger that left four soldiers dead.

“Overall our mission is global reach, and we hope to help our allies by extending their flight time that is necessary to complete their mission,” an Air Force statement in September about refueling operations in Africa said.

AFRICOM on Wednesday said it couldn’t comment on the upcoming IG audit, but added “all movements are done in coordination with applicable host nations and support partners.”

“We plan to continue this support and we constantly examine more efficient ways to provide support to our allies,” AFRICOM spokeswoman Samantha Reho said.