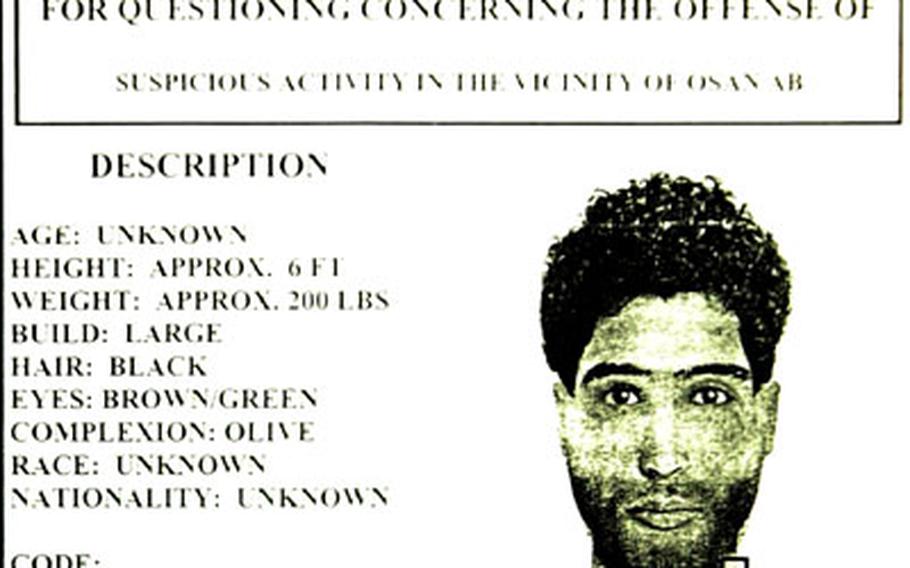 Air Force Office of Special Investigations agents at Osan Air Base have posted fliers with a composite sketch of the man, a physical description and bold- faced letters proclaiming &#8220;WANTED&#8230; for questioning concerning the offense of suspicious activity in the vicinity of Osan AB.&#8221;

According to investigators and Osan public affairs officials, a group of airmen at the Songtan shopping center watched as the man talked on his cellular telephone and twice parked a bicycle near them before walking away.

&#8220;The incident involved an individual moving in an unusual manner,&#8221; said Jim Anderson, head of the Osan OSI detachment. &#8220;In this instance, what we do is try to follow up, get an explanation and put to bed what feels like unusual activity.&#8221;

But in this age of heightened awareness and fear of terrorism, the man&#8217;s actions fit into categories &#8212; such as surveillance or elicitation of information &#8212; that officials are asking airmen to closely watch under the &#8220;Eagle Eyes&#8221; program.

Though officials say they&#8217;re still looking for information about the man, and the man himself, they declined to say how some of the &#8220;wanted&#8221; posters became taped up on some areas of Yongsan Garrison.

South Korean police in Pyongtaek said Tuesday they weren&#8217;t aware of the situation and hadn&#8217;t been in contact with OSI.

A national assembly member said National Intelligence Service officials briefed members of the legislature&#8217;s intelligence committee on the suspected activity in December. Several of the suspected agents had traveled to South Korea with the support of alleged terror cells in Southeast Asia, the reports said.

Reactions to the wanted flier have varied.

A group of high school students Monday afternoon read and laughed about one of the fliers posted on the windows of the Seoul American High School gymnasium, dismissing it as &#8220;hype.&#8221;

One civilian resident of Yongsan Garrison saw it differently.

&#8220;Unfortunately, because of the times we live in, you have to take these things seriously,&#8221; said Cathy Nelson, a military spouse. &#8220;If they decided it was important enough to do the sketch of the guy and ask people to look out for him, then that&#8217;s probably what people should do.&#8221;