Investigators: Pilot error, weather contributed to A-10 crash near Spangdahlem 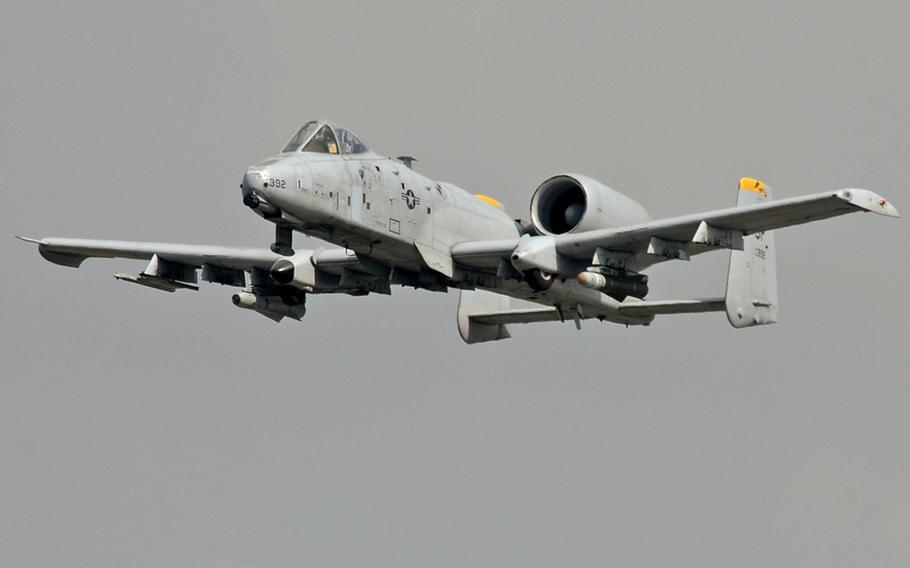 Buy Photo
An A-10 "Warthog" flies over the Spangdahlem Air Base, Germany, runway. Pilot error is to blame for the crash of an A-10C Thunderbolt II near Spangdahlem on April 1, 2011, according to the findings of an Air Force crash investigation board. (Michael Abrams/Stars and Stripes)

KAISERSLAUTERN, Germany &mdash; The pilot whose A-10 Thunderbolt II crashed on returning to Spangdahlem Air Base after a routine training mission last year became spatially disoriented while flying in thick clouds and lost control of his aircraft, an Air Force accident investigation board has found.

Lt. Col. Scott Hurrelbrink ejected less than two seconds before the $17 million aircraft hit the ground nose down and burned in a grass field just north of the sparsely populated town of Laufeld, near the city of Wittlich, according to the board&rsquo;s report, which Spangdahlem officials released Monday.

The board found &ldquo;clear and convincing evidence that the cause of the mishap was human factor error,&rdquo; the report states. But investigators determined that poor weather, the pilot&rsquo;s lack of recent experience flying in close formation in heavy clouds and procedural errors on the part of the pilot and the flight lead also contributed.

&ldquo;Flying on the wing in the weather is a specific maneuver which commonly causes spatial disorientation, and if minimally practiced will require even greater concentration on the part of a pilot,&rdquo; the report states.

Hurrelbrink was not named in the report, which the Air Force made available online, but he was identified by Spangdahlem officials after the accident.

A day after the crash, base officials said Hurrelbrink&rsquo;s injuries were not serious. But a base spokeswoman said in an email Tuesday that the pilot &ldquo;sustained significant injuries,&rdquo; an assessment also in the report.

Base officials provided no other information Tuesday about the pilot, only that he is no longer assigned to the 81st Fighter Squadron.

Lt. Gen. Stephen Mueller, U.S. Air Forces in Europe vice commander, appointed Col. Peter Davey, the 603rd Air Operations Center commander at Ramstein Air Base, Germany, to be the board president and lead the investigation, which was conducted from June 1 to June 24, according to the report.

The crash occurred on the afternoon of April 1, after Hurrelbrink and the flight lead, who was not identified in the report, descended into clouds using the plane&rsquo;s instruments to guide them while returning to Spangdahlem.

Hurrelbrink lost sight of the flight lead at about 3,700 feet in what was described as a &ldquo;thick cloud deck with poor visibility,&rdquo; the report says.

Since Hurrelbrink &ldquo;had to concentrate on the lead aircraft while flying formation, he had limited time to cross-check his own instruments and had no visible horizon,&rdquo; Davey wrote in explaining his opinion of the crash&rsquo;s cause. &ldquo;Though this is a routine required skill, it still sets the conditions that led to the spatial disorientation.&rdquo;

Spatial disorientation can occur when a pilot cannot correctly interpret position or direction due to clouds, low-visibility or other conditions that prohibit the pilot from orienting to a visual horizon, 2nd Lt. Stephani Schafer, a base spokewoman, explained in an email.

After calling &ldquo;lost wingman,&rdquo; Hurrelbrink banked left 15 degrees for only five seconds, instead of 15 seconds, a procedure designed to separate the aircraft and help the pilot orient his aircraft, among other things, the report found. Though the flight lead acknowledged the pilot&rsquo;s &ldquo;lost wingman&rdquo; call, he failed to communicate key parameters to Hurrelbrink, such as his own altitude, heading and airspeed, according to the report.

After emerging &ldquo;from the clouds inverted, 60 degrees nose low&rdquo; at about 1,500 feet, the pilot &ldquo;immediately experienced &lsquo;ground rush&rsquo; &rdquo; &mdash; a visual misperception of how quickly the ground is approaching &mdash; &ldquo;and made an initial attempt to pull to the horizon,&rdquo; the report says.

Assessing that he could not recover from the dive, the pilot &ldquo;released the stick to eject,&rdquo; the report says.

The pilot appears lucky to have survived the crash. An accident simulation showed there were about two seconds from pulling the eject handle to impact with the ground, with the pilot landing less than 50 yards from the impact crater, according to the report. Fire damage to the parachute showed the canopy was not fully inflated at the time of exposure to the aircraft explosion, indicating Hurrelbrink did not get full deceleration, according to the report.

The report also notes the efforts of local residents on the scene. Several residents of Laufeld witnessed the crash and contacted emergency responders. Despite the proximity of the burning wreckage, the first two residents on scene cut the pilot&rsquo;s parachute lines and harness to disconnect him from the parachute and remained with him until professional help arrived.

The environmental cleanup costs have yet to be determined, the report says.

The twin-engine, single-seat A-10, also known as the Warthog, is used to provide close air support for ground forces by attacking tanks and other targets. Since 2003, A-10s from the 81st Fighter Squadron have deployed four times to Afghanistan. In the month prior to the mishap, the squadron executed a short-notice deployment in support of operations in Libya, according to the report.

The Air Force plans to deactivate the 81st as part of proposed budget cuts in fiscal 2013.