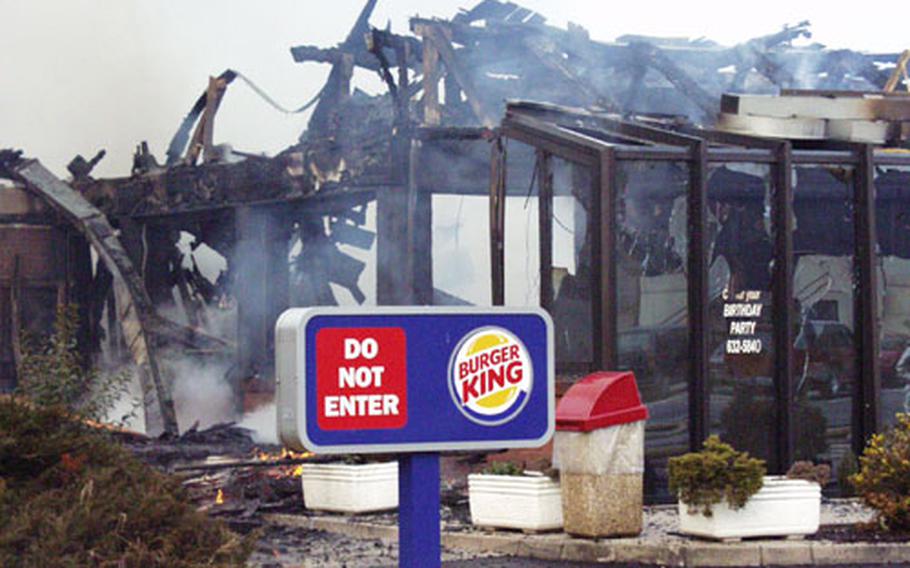 Italian authorities will be investigating the fire that destroyed a Burger King restaurant on Aviano Air Base, Italy. (Kent Harris / S&S)

AVIANO AIR BASE, Italy &#8212; Italian investigators are looking into the circumstances surrounding the fire that destroyed a Burger King restaurant on base Jan. 12.

Meanwhile, base officials are trying to figure out why there was a power failure on base as the building burned, hampering efforts to put out the fire.

The dozens of base firefighters who responded to the blaze were limited by the current distribution system in the amount of water they could put on the fire and by the failure of water pumps because of the electrical outage, he said.

As a result, they had to rely on two tanker trucks to ferry much of the water they needed. Those tanker trucks had to get water from another area in the city several blocks away that was unaffected by the power outage.

Haynie said the water system on Area 1 didn&#8217;t completely fail. But even with additional water pumped in from a city line and another line from the adjoining area, the pressure wasn&#8217;t enough to get the powerful jets from both of the fire department&#8217;s trucks working.

No one is suggesting at this point that more water pressure would have saved the building, though it may have taken less time to put the fire out.

No one was injured in the fire, which engulfed the building shortly after the daily lunch rush was over. An initial estimate by the base indicated it might cost $1 million to replace the stand-alone structure.

Haynie said a new water station on Area 2, which is just across the street, would probably have made some difference in efforts to put out the blaze.

That station will have more capacity and also have backup generators in case of a power outage.

Another project that&#8217;s a few months from completion will again restore permanent food service to those who work in the area. The building that formerly housed the base exchange has been undergoing renovations for months. When it reopens in early summer, it will be a mini-mall and feature food options including a Subway sandwich franchise.

In the meantime, the Army and Air Force Exchange Service hopes to quickly open Robin Hood sandwich and Anthony&#8217;s Pizza outlets in Sabre Hall, which housed the base&#8217;s consolidated club until recently. It currently operates both of those franchises &#8212; as well as a Burger King and several other restaurants &#8212; across town on the flight line area. The two additional outlets would serve to bridge the gap on Area 1 until the mini-mall opens.

Anthony&#8217;s Pizza will eventually join Subway in the complex.

Authorities should have a report into the fire released well before then.

Investigators have been told to file a report by March 14.