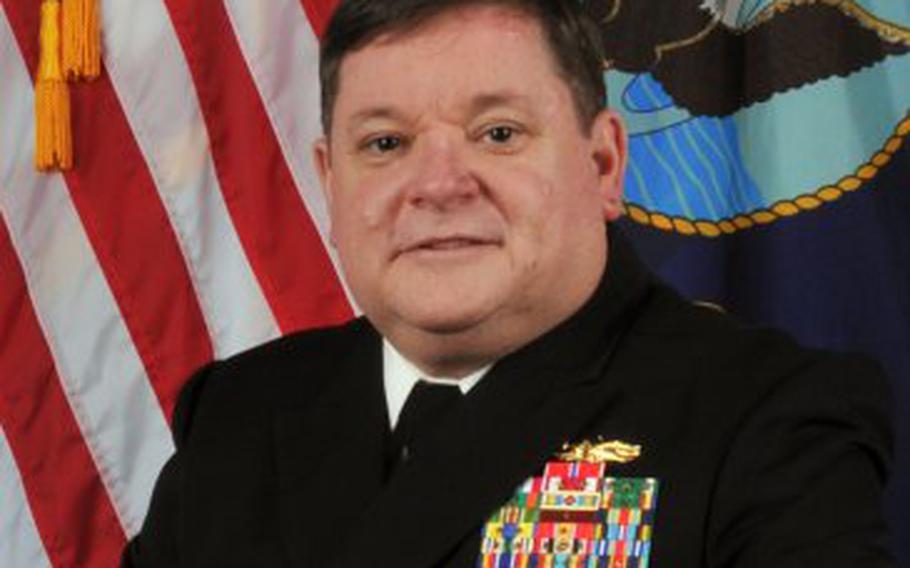 Capt. Michial S. Warrington was removed from his post as hospital commander at Naval Station Rota on March 9, 2015. (U.S. Navy )

NAPLES, Italy — The Navy fired the commander of its hospital in Rota, Spain, earlier this year after finding he sexually harassed sailors while drunk at a party, according to a newly completed Navy investigation.

Capt. Michial S. Warrington was relieved in March for what Navy Medicine East called “unprofessional behavior.” The investigation was wrapped up June 2 with the concurrence of Navy Surgeon General Vice Adm. Matthew Nathan.

The inquiry centered on a private party at a Rota bar in February, when sailors from several hospital departments gathered to bid farewell to two colleagues. Warrington wasn’t invited to the event but was already at the bar drinking with several of the hospital’s Spanish employees when it began, according to the Navy report.

Sailors told the investigating officer they were shocked to see their commanding officer at a bar. They said they grew uncomfortable with his presence as the night progressed, when what began with funny stories and advice degenerated into something more crude, parts of it directed at specific sailors.

One sailor said the commander nudged him to follow the sailor’s girlfriend, another sailor, into the bathroom. “Aren’t you going to follow her and give it to her good?” the sailor recalled him saying. Warrington later joined the group at the couple’s table, where he joined in the conversation before things became awkward.

“He got really delirious starting to say that he loved me over and over,” the female sailor told the investigator. “I started to ignore him at this point because I was very uncomfortable.”

Others remembered Warrington’s warning sailors smoking hookahs inside the bar that they better not “pop positive,” or test positive, for marijuana, or he’d punish them. One sailor smoking a hookah said Warrington told him “I don’t care what you suck,” before repeating “You keep on sucking, you keep on sucking I just want to talk to 8404 corpsmen,” a reference to hospital corpsmen who work with Marines.

A few sailors said Warrington didn’t appear intoxicated, and one said he was “happy drunk.”

A group of sailors from the bar eventually walked Warrington home. Along the way they began running and calling cadence, several remembered.

Warrington later thanked the sailors for taking him home, they said. He apologized to the sailor with the girlfriend, and he asked to apologize to his girlfriend. She refused to see him. Interviewed by investigators, Warrington admitted he had had too much to drink.

“I understand that I am accountable,” he said.

Navy Medicine East commander Rear Adm. Terry Moulton relieved Warrington from command on March 9 and reassigned him to another outfit, “but not in a position of leadership.”