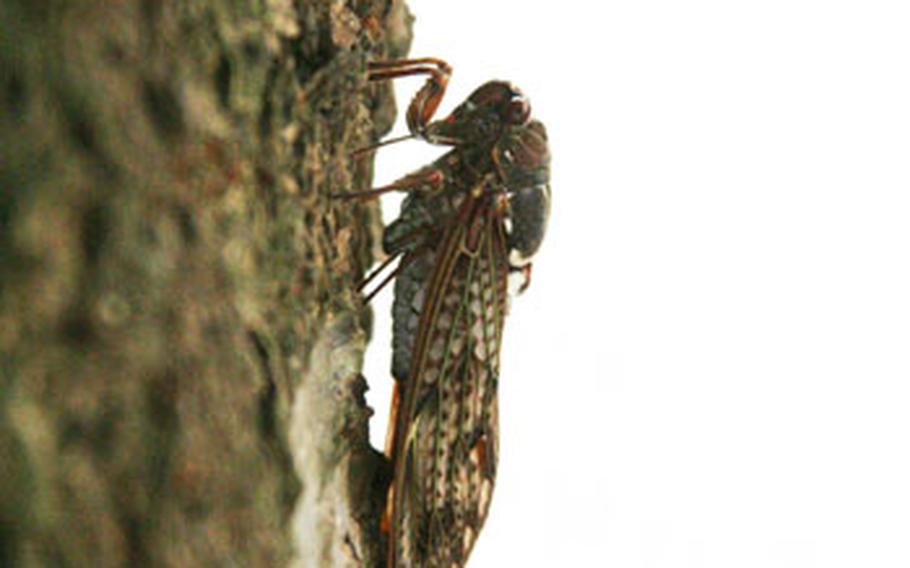 This abura zemi is one of the most common found in Japan’s Kanto region and is one of many cicada species responsible for the loud buzzing in the trees. (Hideomi Kakimoto/Courtesy of the U.S. Navy)

YOKOSUKA NAVAL BASE, Japan &#8212; Nine whacks. That&#8217;s how many times the Navy spouse struck the insect before all 15 pairs of legs stopped wriggling.

"I don&#8217;t mind flying cockroaches, spiders or snakes. But this thing ...." Kelly Niswanger said Tuesday, wincing as she described her run-in this week with a gejigeji. It was her first encounter &#8212; she and her family just moved into their off-base home in Yokohama a few months ago.

Big. Quick-moving. More than 10 pairs of legs &#8230; having just one of these endearing qualities is usually enough to make an insect unwelcome, let alone all of the above, says Hideomi Kakimoto, a Yokosuka base environmental engineer.

But "geji," or household centipedes, are known as "good bugs" in Japan, as their ninja-like maneuvering (and, cringe, their ability to jump) allows them to hunt other household pests like cockroaches and clothing moths.

Wikipedia says that geji are even sold in Japanese pet stores.

"They do look scary," Kakimoto said. "But they are good bugs."

Other good bugs can also frighten foreigners who aren&#8217;t used to sharing their living spaces with them, Kakimoto said. Take ashi daka gumo, or the "high leg" spider. Huge, brown with knobby legs, these spiders are common residents in Japanese homes.

Frightening in size and speed, these are excellent cockroach killers and are harmless to humans, Kakimoto said. The spiders don&#8217;t even make a mess, as they don&#8217;t build webs, relying instead on high-speed chases to snag their prey.

Summertime in Japan is also filled with the deafening "wha-wha" whine of cicadas, the volume and variety of which can also startle Americans, Kakimoto said. "Lots of Americans are surprised at the harmony," Kakimoto said, citing a story about one famous American scientist who heard a cicada and assumed all that noise came from a bird.

Navy spouse Kelsey McCabe worked as a nanny for a Japanese family. In her experience, the culture seems to like big bugs, like cicadas and beetles.

"The children in the family I worked for collected bugs," McCabe said. "Some families are really into them."

"The land has been in military use for many years &#8212; that&#8217;s why the area is so well-preserved," Kakimoto said. Ikego Housing Area is home to several rare insects, he said, including two types of fireflies.

But some insects don&#8217;t just look frightening, they are frightening. Be on the lookout for centipedes, hornets and wasps, said Ryouko Araki of Yokosuka&#8217;s Environmental Division. Geji can also bite, but the venom is harmless to humans, Araki said.

After her close encounter of the geji kind Monday night, "harmless" is not how 6-year-old Charlize Niswanger described the bug.

"I had nightmares," Charlize said. "They scare me."