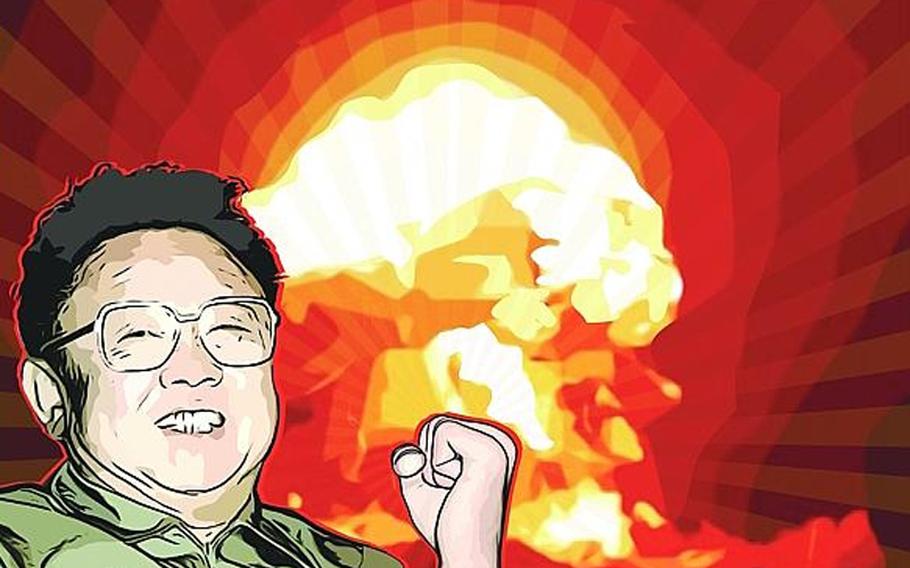 SEOUL &mdash; North Korea threatened in June to turn Seoul into a &ldquo;sea of fire&rdquo; if the South went through with plans to broadcast propaganda into its country from loudspeakers set up at the Demilitarized Zone.

In July, the North threatened to start a &ldquo;retaliatory sacred war &hellip; based on nuclear deterrent&rdquo; in response to an upcoming U.S.-South Korea naval exercise.

And, earlier this month, in advance of more scheduled U.S.-South Korea joint maneuvers, a commentary on a state-controlled run website said the Pyongyang military would &ldquo;deal a merciless blow if warmongers stage reckless provocation.&rdquo;

North Korea is not known for understatement &mdash; or for following through on the vast majority of its over-the-top threats.

But experts on the &ldquo;Hermit Kingdom&rdquo; say its propaganda should not simply be dismissed. Instead, the bellicose banter should be studied closely for what it says about what is going on inside the Stalinist nation &mdash; and what its leaders are really thinking.

The March sinking of the South Korean warship Cheonan and the deaths of 46 crewmembers might seem like a rare example of the North finally carrying out a military threat over its disputed maritime border. Though a multinational investigation concluded Pyongyang was to blame, experts have been perplexed that North Korea didn&rsquo;t celebrate the sinking in its confrontational rhetoric, instead calling it a &ldquo;tragedy&rdquo; and denying any responsibility.

&ldquo;Generally, their propaganda is very cleverly done,&rdquo; said Brian Myers, a professor at Dongseo University in Busan and the author of &ldquo;The Cleanest Race: How North Koreans See Themselves and Why It Matters.&rdquo;

First and foremost, observers say, the goal of the North&rsquo;s provocative rants is to impress its own people.

Myers said North Korean leaders cannot point to any prosperity they&rsquo;ve brought to their impoverished citizenry, so it has become &ldquo;a state that derives all of its popular support at home from the claim to be a very strong state that strikes terror into the hearts of its enemies.&rdquo;

As for the outside world, North Korean officials follow a lesson they have learned over the years as a small country: &ldquo;You have to puff yourself up and sound meaner. &hellip; It&rsquo;s the only way you&rsquo;re going to get attention and, eventually, the respect of bigger, stronger powers,&rdquo; said Robert Carlin, who worked for more than a decade as chief of the Northeast Asia division in the U.S. State Department&rsquo;s Bureau of Intelligence, where one of his jobs was analyzing North Korea&rsquo;s official statements.

In recent decades, the U.S. and South Korea have often used North Korean rhetoric to guide policy and shape their approach to ongoing disputes with the North.

&ldquo;Like &lsquo;The Boy Who Cried Wolf,&rsquo; you might tend to disregard it after awhile,&rdquo; Carlin said. &ldquo;You don&rsquo;t want to take all of it literally,&rdquo; he said. &ldquo;But you can&rsquo;t ignore it.&rdquo;

Carlin said that when he was with the State Department there was no list of magic words or phrases that signaled when North Korea planned to follow through on a threat.

Instead, he said, &ldquo;We had a very large base of information which we could use to compare various statements over many years. With very careful, detailed research, you could spot changes in what they said and what those changes might mean.&rdquo;

For example, when North Korea was involved in negotiations in the 1990s with the U.S. and South Korea, there were &ldquo;lots of statements that were not filled with bombast, but were intended to signal North Korea&rsquo;s positions on issues under negotiation,&rdquo; Carlin said. &ldquo;You began to get a much fuller sense how far they could move, how fast they could move &hellip; and what was simply rhetoric.&rdquo;

Myers said those were the days of relative calm in the rhetoric North Korea directed toward the U.S., which was sending considerable humanitarian aid to the North during the 1993-2001 Clinton administration.

However, the election of George W. Bush prompted a change in the tone of comments coming out of Pyongyang. In 2001, after the 9/11 terrorist attacks, Bush listed North Korea, Iraq and Iran as the &ldquo;axis of evil&rdquo; &mdash; a list on which the North remained until 2008, when it was dropped after agreeing to allow inspection of its nuclear facilities.

Analysts agree there was also relative calm in North Korea&rsquo;s statements directed at the South during the years of South Korea&rsquo;s &ldquo;Sunshine Policy&rdquo; toward the North, from 1998-2008, when the two countries cooperated in a number of high-profile ways.

&ldquo;The big change,&rdquo; Myers said, came in 2008 when Lee Myung-bak became South Korea&rsquo;s president with plans to be much tougher than his predecessor in dealings with the North.

&ldquo;Then you saw a sharp shift,&rdquo; he said. &ldquo;For 10 years, the North Koreans had refrained from attacking the South Korean president by name.&rdquo;

&ldquo;They always say ridiculous things, over the top, and it ends up they don&rsquo;t mean anything by it,&rdquo; Carlin said. &ldquo;But, when they were moving toward the nuclear tests in 2006 and 2009, you could see something like that was coming. They got super serious in what they were threatening.&rdquo;

For example, on May 8, 2009, a North Korean Foreign Ministry spokesman said: &ldquo;As we have clarified already, we will further strengthen our nuclear deterrent.&rdquo;

&ldquo;That,&rdquo; Carlin said, &ldquo;was a good indication that they were moving to a second test,&rdquo; which happened on May 25.

Official U.S. comment often has been dismissive of North Korea&rsquo;s rhetoric, repeatedly suggesting that the days of responding to threats with concessions are over.

&ldquo;Maybe it&rsquo;s the mother in me, or the experience that I&rsquo;ve had with small children and unruly teenagers and people who are demanding attention,&rdquo; she said. &ldquo;Don&rsquo;t give it to them. They don&rsquo;t deserve it. They are acting out.&rdquo;

North Korean officials didn&rsquo;t exactly quiet down after her tongue lashing. A Foreign Ministry spokesman responded: &ldquo;We cannot but disregard Mrs. Clinton as a funny lady as she likes to utter such rhetoric, unaware of the elementary etiquette in the international community.

&ldquo;Sometimes she looks like a primary schoolgirl and sometimes a pensioner going shopping.&rdquo;

The Cheonan sinking opened yet another chapter in North Korean rhetoric. An international group of investigators, led by South Korea, concluded that the torpedo was fired from a North Korean submarine, which led the U.S. and South Korea to take economic steps to punish the North.

The North, in its many denials of involvement, accused South Korea&rsquo;s President Lee of engaging in a &ldquo;conspiracy with U.S. and Japanese masters&rdquo; against his fellow Koreans.

Carlin and Myers said analysis of North Korea&rsquo;s public statements before and after the sinking have been inconclusive as to its guilt or innocence.

&ldquo;It was always curious to me they called the sinking on several occasions a &lsquo;tragedy,&rsquo;&thinsp;&rdquo; Carlin said. &ldquo;It is not normal for them to use that language.&rdquo;

Myers said that since the incident, there&rsquo;s been no printed propaganda from the North boasting that it sank the Cheonan.

&ldquo;I&rsquo;ve seen rumors that inside the country, they were confessing and gloating over it,&rdquo; he said. &ldquo;But I&rsquo;m a little bit skeptical of those reports.&rdquo;

In the wake of the Cheonan incident, there was an exchange of threats that ended with South Korea changing course after hearing the tone of North Korea&rsquo;s response. After the sinking, South Korea said that it would resume blasting propaganda into North Korea from loudspeakers at the DMZ. North Korea countered by threatening to use artillery to silence those speakers.

&ldquo;When they made those threats against the loudspeakers, they were much more specific,&rdquo; Carlin said. &ldquo;I would have thought twice about ignoring them.&rdquo;

South Korea ultimately decided not to start the broadcasts.

Kang Cheol-hwan &mdash; a former inmate of North Korean gulags who defected in 1992 &mdash; has heard rhetoric from the North on both sides of the border.

Now chief director of the North Korea Strategy Center, a human rights group, Kang said he remembered hearing threats from Pyongyang against other countries almost daily on television and radio.

&ldquo;It was just natural to hear those threats,&rdquo; he said. &ldquo;But we didn&rsquo;t pay much attention to all those speeches. In the midst of people starving to death, we only heard it as the government&rsquo;s rattling on. I think their propaganda is losing its effectiveness.&rdquo;

Carlin said he does not hold much hope that North Korea will ever ratchet down the intensity or frequency of its threats.

&ldquo;You probably don&rsquo;t want to be the fellow in Pyongyang saying, &lsquo;I think we should tone down this statement because we&rsquo;ll look silly,&rsquo;&thinsp;&rdquo; he said. &ldquo;We have the same problem in our government: It&rsquo;s hard to advocate moderation.&rdquo;