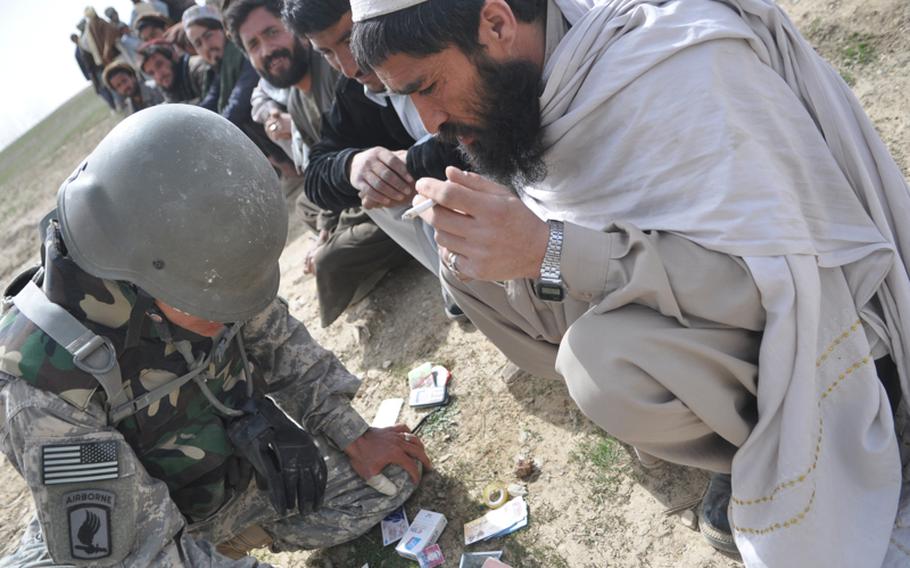 An interpreter working for the U.S. Army interviews villagers in Logar province in 2010. Many translators who worked for American forces now fear for their life because of their affiliation and are frustrated with delays in getting visas to the U.S. (Heath Druzin/Stars and Stripes)

KABUL — The phone calls come at night, the threats always the same: leave your job or lose your head.

“Every minute, every moment I’m in my house,” Wiyar, an interpreter with the U.S. military in volatile Kunar province, said of his fear of being attacked. “I’m not sleeping till midnight. I’m scared I’ll be attacked by insurgents. Every time I go home, I wear a scarf over my face so people don’t recognize me.”

Wiyar is one of scores of interpreters who have been waiting months or years to get a special U.S. visa for Afghans who have worked for or on behalf of the U.S. government and who now fear for their safety because of that affiliation. Like all of the interpreters interviewed for this story, he asked to be identified by one name for fear of being killed by those who consider Afghans who work for foreigners traitors.

Interpreters have been crucial to the coalition mission, providing a bridge between troops and Afghans and proving vital intelligence gathering. Some are so trusted they are allowed to carry weapons on patrol.

But, unlike international troops, translators must leave the base at the end of the work day and return to villages where they have no protection from those who want to harm them.

The dangers interpreters face was brought into sharp focus in November when two translators driving to work in Logar Province were shot and killed by Taliban fighters. It’s unclear how many interpreters have been killed since the U.S. invasion in 2001, but the attack in November was just one of several high profile incidents that have come to light.

The U.S. introduced the special immigrant visa program in 2006 for Iraqi and Afghan interpreters whose safety was threatened because of their affiliation with the U.S, and has since expanded the program to include other categories of workers. Anyone who has worked for or on behalf of the U.S. government is entitled to apply for a visa through the program.

So far, more than 2,200 Afghans who worked for the U.S. government have received visas, according to State Department numbers.

The backlog in Afghanistan started, in part, because until about a year and half ago, the U.S. Embassy in Kabul was not offering in-person visa interviews. Instead, anyone who wanted to apply for a visa had to travel to Islamabad, Pakistan, an expensive, sometimes dangerous journey many were unwilling to undertake.

Now, for the first time in 30 years, the U.S. is doing interviews in Kabul. That has strained resources and the embassy has been scrambling to process visas as quickly as possible, a U.S. Embassy Kabul official said.

“It’s like trying to get a big aircraft carrier up to speed,” said the embassy official, who agreed to speak only on condition of anonymity according to embassy rules. “It’s a bulky program.”

Also slowing the process for some is vetting done by the State Department to make sure interpreters are not a security threat. There have been cases of interpreters turning against coalition troops and officials, the most spectacular incident in March last year, when a translator working for the British military drove a truck onto the runway of a major military installation as then Secretary of Defense Leon Panetta’s plane was landing.

“We recognize that many who are employed by or work on behalf of the U.S. government in Afghanistan, and their families, face real threats as a result of their U.S. government affiliation,” State Department spokesman Peter Velasco said in response to emailed questions. “We take these threats, and the concerns of those who work with us, very seriously and we are committed to providing them with the benefits for which they are legally eligible. At the same time we must ensure that recipients of Special Immigrant Visas – like all others who seek to enter the United States – do not pose a threat to our security.”

Whatever the reason, the wait is excruciating when every knock on the door seems ominous.

“Our life here is dangerous,” said Nisar, another interpreter in Kunar, who has been waiting 16 months for a visa. “Three or four times guys who I didn’t know called my cell phone (to threaten me).”

Wiyar, who has been waiting for a year and a half for his visa and has continued to work during that time, hopes it comes through before the men behind the phone calls catch up with him.

“They told me, ‘You should quit your job immediately. We know you, we have your picture, we know your are living in Jalalabad,’” he said, adding, “I don’t have weapons. I don’t have anything to protect myself.”

A Taliban spokesman said that as the “eyes and tongue” of foreign forces, interpreters are key to the war effort and therefore legitimate targets.

“Those who work as interpreters or any other job for the foreign militaries, they are the same as the foreign enemy for us, and anywhere the foreign forces come under Taliban attacks, the same thing will happen to their Afghan colleagues,” Taliban spokesman Zabiullah Mujahid said. “But if they quit their job and go home then we don’t have any problem with them.”

However, interpreters who have quit working for the U.S. say they still feel threatened.

The embassy official says visa applications are processed in the order they are received. Her staff has been working every day to chisel away at the backlog, sometimes cramming as many as 70 interviews into a day.

“We see some really amazing letters talking about the way people have put their lives on the line,” the official said. “You get moved to tears sometimes reading these.”

Some of the interpreters behind those letters, though, feel they are being abandoned by the very government they risked their lives to help. All they can do is hope their visa arrives before the Taliban.

Zubair Babkarkhail and reporter Chris Carroll contributed to this report.