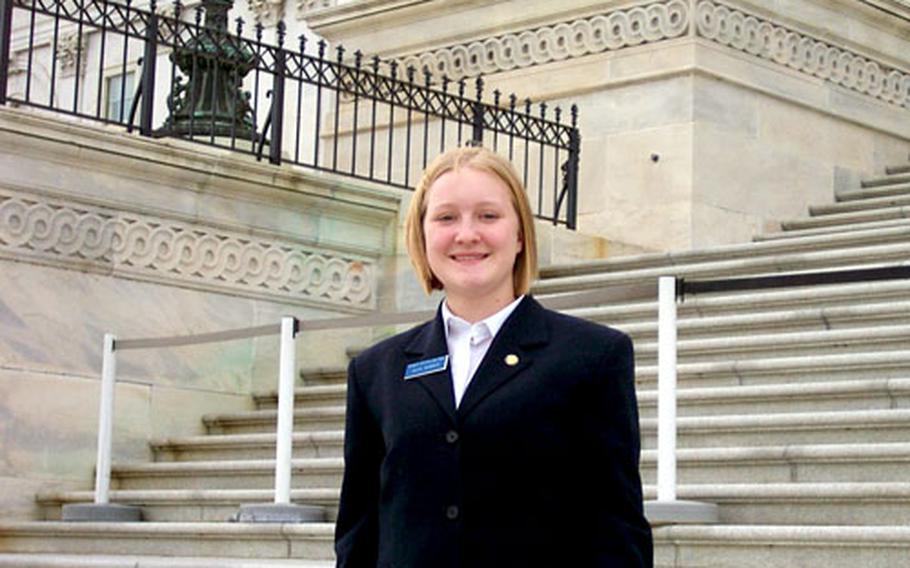 Katie Rember, shown here on the steps of the U.S. Capitol, is one of 30 teens working in the Senate this fall as part of the page program. (Leo Shane III / S&S)

WASHINGTON &#8212; Katie Rember knew one day she&#8217;d be working on the floor of the U.S. Senate, ever since she was a wide-eyed little girl touring the Capitol.

Of course, that was only a few years ago. And the 16-year-old admits she&#8217;s still in awe every time she walks into the building.

&#8220;I think the senators can always tell whenever a new page class starts, because everyone is just walking around staring at the ceiling,&#8221; she says, laughing. &#8220;This is one of the biggest thrills of my life.&#8221;

Rember, a military brat who for the past two years lived in Stuttgart, Germany, is one of 30 teens selected from thousands of applicants for this autumn&#8217;s Senate page program, designed to help young minds learn about American government by giving them jobs in the nation&#8217;s legislative heart.

The job mainly consists of shuttling amendments around Capitol Hill, escorting senators to and from their seats, and other clerical duties that keep the country running.

Rember recalls seeing a page dashing off to some mundane task while she was touring Washington in the sixth grade. &#8220;I thought it would be so much fun, just to be here,&#8221; she said.

Usually the pages are selected from the home states of the most senior senators. Rember was living in Germany when application time arrived, so she had to petition Idaho Sen. Larry Craig for special consideration.

&#8220;I saw an article in Stars and Stripes about him visiting wounded soldiers in Germany, and I knew he was on the veterans [affairs] committee, so I figured he&#8217;d be sympathetic to a military family,&#8221; she said.

He was, and she ended up being selected by Republican staffers.

Coincidentally, her father was reassigned to the Pentagon just weeks before she received the news, so the entire family moved with her to the D.C. region. But for the five months she&#8217;s in the program, she lives with other pages near Capitol Hill.

The program pits a page&#8217;s teenage world with their impending adult lives, with weekend field trips and early-morning history classes interrupted whenever their bosses decided to hold a Senate session. The pages are paid for their work, but must finish their homework whenever the legislative branch finishes for the day.

Less enthralling have been the brewing battles between liberals and conservatives within the page class, but Rember &#8212; taking a cue from her elected bosses &#8212; said she tries to stay above the fray as a peacemaker.

In late January, she&#8217;ll finish the page program and start at a new school yet again, and start thinking about the next move when college arrives. Her family lived in Iceland, Virginia and Florida before Germany, but she says she&#8217;s learned to adjust quickly and be positive.