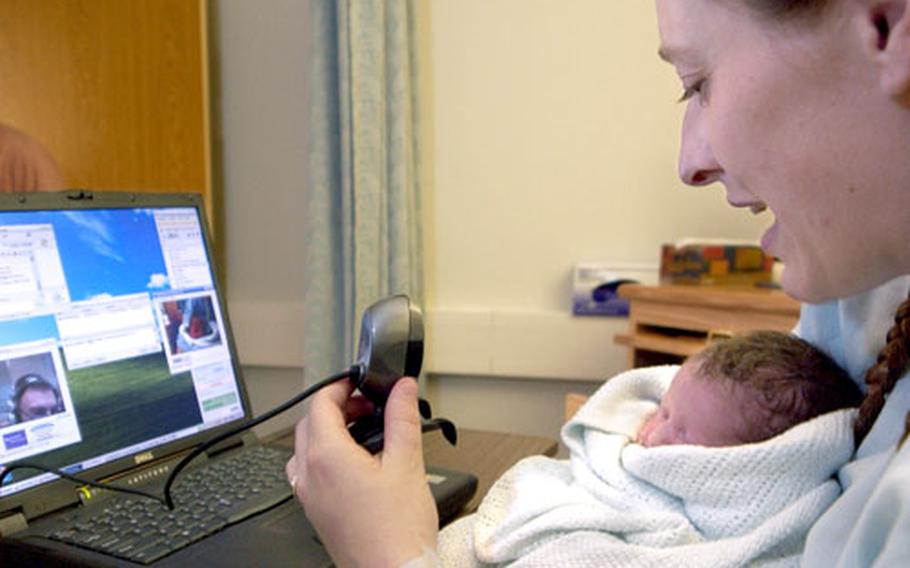 LANDSTUHL, Germany &#8212; Thanks to modern technology, the thousands of miles separating an hours-old newborn and her deployed father did not prevent the two from uniting.

A laptop computer, webcam and Internet connection made the father, daughter and mother connection possible.

The real-time meeting marks the first instance Landstuhl has employed such technology in giving a deployed father a chance to see his newborn child.

Tess Stewart, a perinatal research nurse at Landstuhl, began working in March to develop the capability. Stewart had heard of other hospitals using webcams to let deployed dads see their babies hours after birth.

The labor and delivery ward has been outfitted with wireless Internet, and soon each of the hospital&#8217;s seven labor and delivery rooms will have its own laptop and webcam. Plans are in the works to have laptops and webcams available for post-partum mothers while on bed rest so they can communicate with family and friends back in the States.

Stewart wants commanders, first sergeants and supervisors to know that the post-birth webcam capability is available at Landstuhl. The leaders also need to be patient and flexible if one of their soldiers wants to see his newborn child, given the unpredictable nature of birth times.

Soldiers who want to take advantage of the service need to create the required Internet accounts on public Web sites and use a downrange Morale, Welfare and Recreation computer lab for the event.

&#8220;It just makes me feel real good,&#8221; Cummings said. &#8220;Sometimes over here on (labor and delivery) you kind of maybe feel left out on the war on terror, but we are a big part. We take care of the families so that the war fighter can drive on. If this helps give them one extra measure of peace, one extra measure of happiness while they&#8217;re down there, it makes it all worthwhile.&#8221;