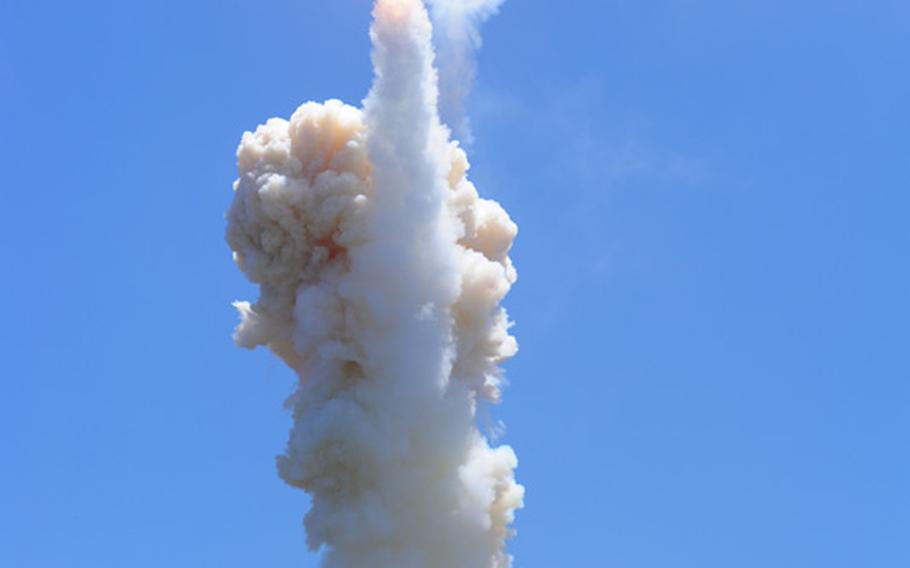 Servicemembers at the U.S. Army’s Reagan Test Site on Kwajalein Atoll, in the Marshall Islands, launched a ground-based interceptor that successfully defeated an intermediate-range missile during a test Sunday of the Ballistic Missile Defense System. (Courtesy of Missile Defense Agency)

A ground-based interceptor launched into space from California defeated an intermediate-range missile during a test of the Ballistic Missile Defense System, Pentagon officials announced.

Servicemembers at the U.S. Army’s Reagan Test Site on Kwajalein Atoll, in the Marshall Islands, launched the ballistic missile Sunday, according to a Pentagon statement.

The Aegis-equipped destroyer USS Hopper detected and tracked the missile, then relayed the data to ground-based commands.

About six minutes after the missile launch, the ground-based interceptor was launched from Vandenberg Air Force Base, Calif.

A three-stage booster rocket system propelled the interceptor into space, where it honed in on the target’s trajectory. The interceptor defeated the missile using only the force of the collision, according to the statement.

Program officials will spend months evaluating Sunday’s performance, according to the statement.

The test was the 65th successful intercept since 2001, out of 81 attempts, for the Ballistic Missile Defense System, Pentagon officials stated.