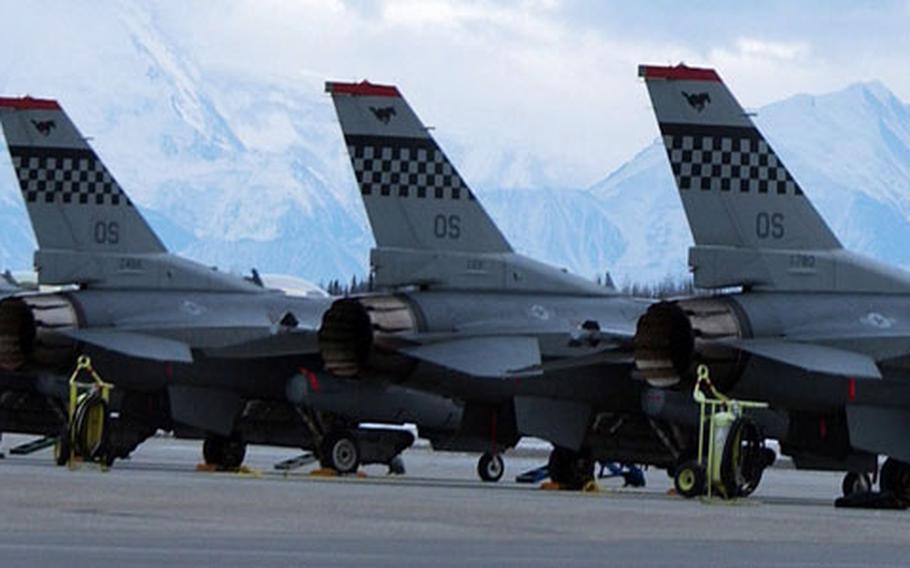 Ten F-16 fighting falcons sit on the tarmac late into the evening recently at Eielson Air Force Base, Alaska, for Operation Red Flag-Alaska. The aircraft are assigned to the 36th Fighter Squadron, Osan Air base, South Korea. (Jonathan Snyder / Courtesy of the U.S. Air Force)

U.S. fighter pilots from Japan and South Korea are honing their combat skills at Operation Red Flag-Alaska, a two-week exercise that ends Friday.

Hosted by Eielson Air Force Base in Alaska&#8217;s central interior, the exercise is part of the spin up for a second deployment downrange this fall for the 14th Fighter Squadron from Misawa Air Base in northern Japan.

&#8220;Every one of the pilots flying with the 14th Fighter Squadron will be deploying to Operation Iraqi Freedom in September,&#8221; Col. Mark Altobelli, 35th Operations Group commander, was quoted in the Fairbanks Daily News-Miner.

This year&#8217;s Red Flag also includes the 36th Fighter Squadron out of Osan Air Base, stateside Air Force and Navy units, as well as servicemembers from Australia and Great Britain, according to the Air Force.

The training, held in 67,000 square miles of airspace over Alaska and Canada, can be intense. One scenario described in military news reports was an aerial dogfight between 10 or more jets while dodging simulated missiles.

Maintainers and support personnel also contribute to Red Flag, according to military officials. In addition to fighter aircraft, the exercise involves tankers, helicopters and an Airborne Warning and Control System. About 150 airmen are participating.