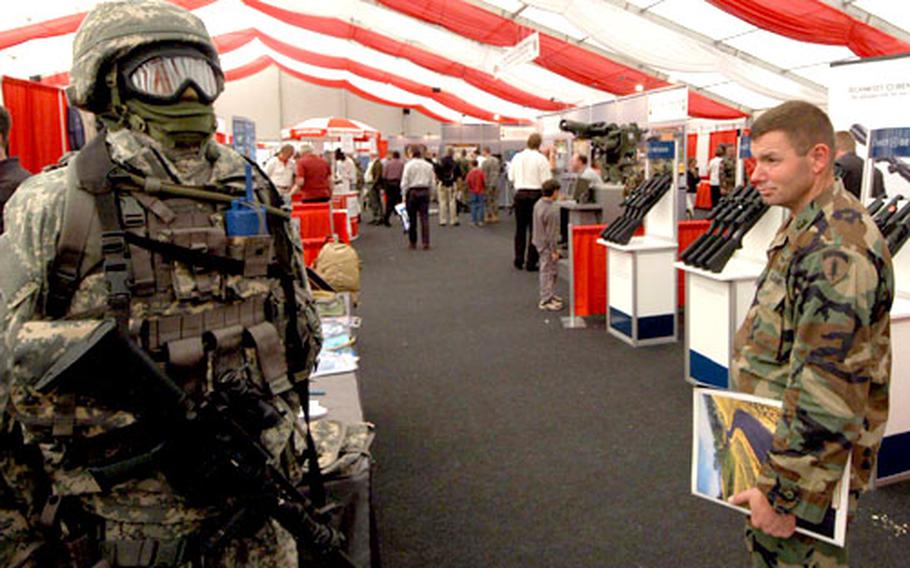 Inside the big tent at the Land Combat Expo 2005 in Heidelberg, Germany. The expo runs through Friday at the Village Pavilion at Patrick Henry Village. (Michael Abrams / S&S)

HEIDELBERG, Germany &#8212; Army commanders have dramatically overhauled how they gather, process and implement intelligence on the battlefield.

&#8220;Intelligence-based operations have been turned upside down,&#8221; Lt. Col. Christopher DeLaRosa told a seminar full of company and brigade commanders and their staff members Wednesday.

DeLaRosa, of the 7th Army Training Command, was one of several people to speak at the Land Combat Expo about lessons learned in recent wartime operations.

Until several years ago, commanders expected to receive up to 80 percent of useful intelligence from overhead surveillance and satellite information. In Iraq and Afghanistan, however, they often have to rely on people on the ground for up to 70 percent of the information needed for a successful operation, DeLaRosa said.

Intelligence training begins a month before a deployment or operation, with a focus on local culture and customs.

The military commanders increasingly depend on low-ranking patrols for critical information that helps improve security and also adds political leverage when trying to influence local leaders.

Soldiers on patrol &#8220;have to have a clear understanding of what he needs to collect,&#8221; DeLaRosa said.

The captains and lieutenants in the field must improve their communication of key intelligence from patrols to their commanders who make broader strategic decisions, DeLaRosa said.

Help from aboveDuring its time in Iraq, the 1st Infantry Division learned how important aerial support is to fighting.

During their &#8220;lessons learned&#8221; seminar Tuesday, 1st Infantry Division officials said air support and a relentless focus on logistics have become a major focus for many Army commanders on the battlefield, soldiers from the division said Wednesday.

Using Apache helicopters to provide security for convoys has become a common and effective way to reduce attacks. The tactic effectively intimidated insurgents and resulted in a 95 percent drop in roadside attacks, said Maj. Hike Wells of the 1st ID&#8217;s Division Support Command.

Ariel support also has proven to be the most effective way of transporting troops and supplies in many volatile areas, Wells said.

Hoskins recalled problems in recent years when units brought all their equipment and weapons downrange, leaving none at home to help train replacements.

He also cited an instance when a supervisor locked all the personal records in a safe, but failed to leave the safe&#8217;s key with anyone back in Germany, rendering the documents inaccessible.

The 1st Armored Division&#8217;s chart-heavy seminar took a complicated, numbers- and acronym-heavy look at a basic concept: Be prepared.

The seminar detailed the division&#8217;s 270-day preparations for future deployments, a process that included vehicle repair and maintenance, logistics and training.

Presenter Maj. Jaronald Tuell said the detailed preparations process was a product of the division&#8217;s first deployment in 2003, when the unit had little time to prepare before leaving for Iraq.

Tuell also underscored the importance of attention to detail by senior leadership.