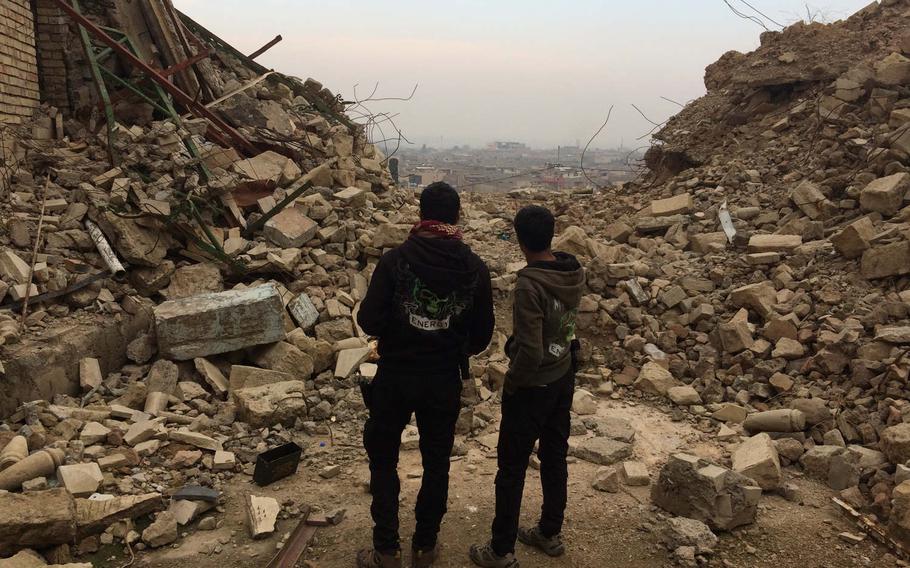 WASHINGTON — Troves of information gathered by Iraqi security forces in eastern Mosul could help the U.S.-led coalition fighting the Islamic State in its assault on the western portion of the city still controlled by the terrorist group, a top British general said Wednesday.

The Iraqis and the anti-Islamic State coalition having been poring through materials gathered from across the recently liberated eastern half of the northern city and have already begun to exploit that information as they prepare to attack the group’s last urban stronghold in Iraq, said British Army Maj. Gen. Rupert Jones, the deputy commander of the Operation Inherent Resolve coalition. He compared the intelligence cache gathered in Mosul to a massive trove of data that the coalition captured in Manbij, Syria during the summer containing some 10,000 items including computers, hard drives and battlefield notebooks.

The Islamic State group “was there for two years, and they are a very bureaucratic organization,” Jones told reporters at the Pentagon during a video briefing from Baghdad. “They keep detailed records and a great deal of that material was in east Mosul.”

The Iraqi security forces have paused their operations in Mosul since declaring the half of Mosul east of the Tigris River “fully liberated” last month. The Iraqis will announce the final operation to free west Mosul, where some 750,000 Iraqi civilians remain under Islamic State group rule, “soon and at a time of their choosing,” Jones said Wednesday. That fight is expected to be difficult because it will take place in a more densely populated portion of the city with older, smaller roads than in the east.

But Jones echoed the confidence of U.S. defense officials who have said for weeks that the terrorists will be defeated.

During the lull in fighting, the Iraqis have brought army, police and tribal units into east Mosul to help secure the city. Jones said more than 46,000 civilians who were displaced during fighting in the city’s east have returned to their homes and markets and schools were starting to reopen.

“Life in Mosul isn’t going to be easy anytime soon, but this is a good indicator of growing confidence in security and stabilization efforts,” he said.

Nonetheless, the Islamic State group has continued to attack civilian population centers throughout the city’s east. They have launched at least 300 mortar, rocket and artillery attacks from the west and sent small, commercially available drones to drop grenades on civilian targets. In Mosul’s Zahara neighborhood, a clinic has received dozens of wounded civilians every day from those attacks.

Such attacks have forced the United Nations to temporarily halt aid operations in some of east Mosul’s neighborhoods.

“Until security improves, it will be difficult for us to provide assistance,” Lisa Grande, the U.N. Humanitarian Coordinator for Iraq, said Wednesday at a camp for Iraqis displaced from Mosul. “… We have every confidence that the authorities will provide security. As soon as it improves, the United Nations agencies will be there to deliver assistance.”