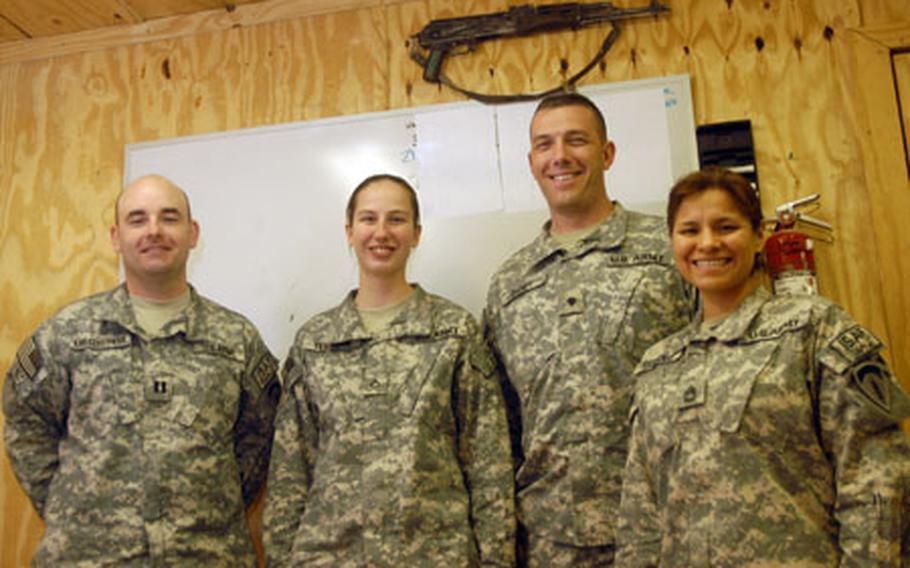 QALAT, Afghanistan &#8212; Afghanistan is a country where the literacy rate is roughly 30 percent.

That applies to unfriendly Afghans as well.

Intelligence personnel working in Afghanistan know this all too well. That incongruity between illiteracy and ingenuity is just one of many things intelligence teams take into account when assessing the capabilities and limitations of the enemy in Afghanistan.

&#8220;An intelligence officer has to think like the enemy,&#8221; said Romanian army Capt. Mihai Anton, who is assigned to Camp Lagman in southeastern Afghanistan. &#8220;He has to foresee enemy actions.&#8221;

As a rule, intelligence personnel prefer to operate in the shadows, often behind closed doors with combination locks. When they do sit down to talk on the record they tend to speak in generalities, loath to say anything that might compromise their work or the overall mission.

In the Lagman tactical operations center, near to where Anton works, is a four-member U.S. Army intelligence team led by Capt. James Kretzschmar. In the office, posted above the printer, is a copy of the creed for their career field. Toward the bottom it reads: &#8220;Always at silent war while ready for a shooting war.&#8221;

Kretzschmar, a New Yorker who is an avid Boston Red Sox fan, stuck to protocol when he spoke of his line of work.

But it&#8217;s no secret that intelligence comes from a variety of sources. There are the high-tech methods, from unmanned aerial drones to communication intercepts. And then there is human intelligence gathering, be it observers or material gleaned from captured fighters or documents.

The Lagman crew does a lot of analytical work on material gathered by troops in the field or higher headquarters. Each may have different snippets of information on a particular situation, but they need Kretzschmar&#8217;s team to analyze what it all may mean.

Spc. David Daney, another analyst, said there could be reports, for example, of a group intending to haul a heavy artillery piece to the top of a hill. But, logically, it may not fit because of the difficulty of getting it up the hill undetected or the group&#8217;s tendency not to expose such a valuable piece of equipment, knowing it&#8217;ll get targeted as soon as they fire it.

Daney has learned the value of not making definitive statements unless all the pieces are in place. He and others on the intelligence team said incorrect assessments linger longer in people&#8217;s minds than a correct one.

That&#8217;s because civilian and military lives can be at stake.

When Daney was in another career field he said he never fully appreciated all the work that went into the briefings he would regularly receive.