Intel battalion back from tough year in Afghanistan 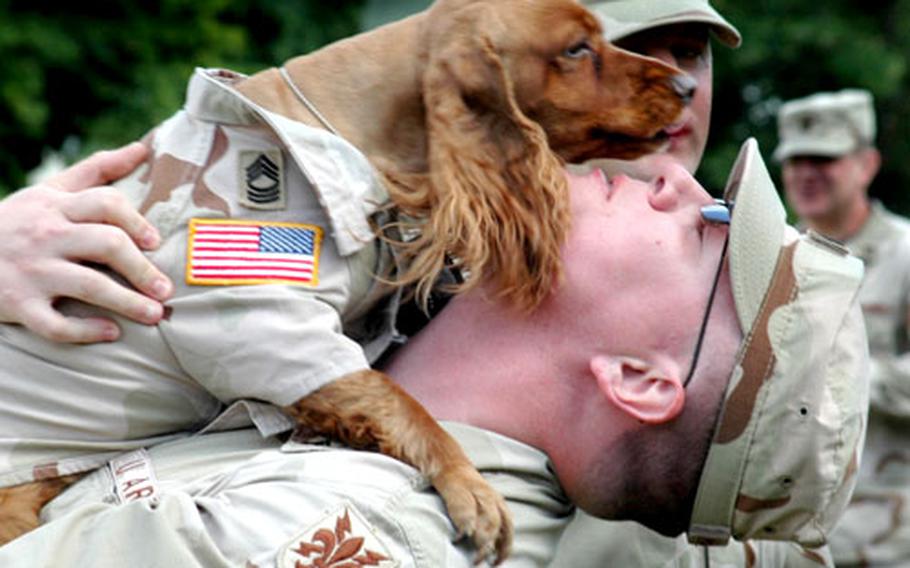 Robin Hoecker / S&S Cierra Norman, 5, sits on the lap of Sgt. Ashley Jarrell as they welcome back Cierra’s father, Staff Sgt. Andrew Norman, and the other members of the 165th Military Intelligence Battalion from a tour of duty in Afghanistan. (Robin Hoecker / S&S) What remains of the 165th Military Intelligence Battalion celebrated its return to Germany at a welcome-home ceremony Tuesday after a year supporting operations in Afghanistan.

More than 500 soldiers deployed with the 165th to Afghanistan in February 2005. Those who hadn&#8217;t moved on since the unit finished redeploying in March stood on the parade field at Kelley Barracks as Lt. Gen. Ricardo Sanchez, V Corps commander, told them, &#8220;This is one of the toughest missions I&#8217;ve ever had to assign to a unit.&#8221;

The battalion&#8217;s Company B was tasked with one of the unit&#8217;s toughest missions. Attached to the 173rd Airborne Brigade, an infantry unit tasked with rooting out Taliban and other insurgents, the company was in constant danger. From its base in Kandahar, the company sent signals collections teams out with the infantry to help locate the enemy.

&#8220;My guys were shot at every time they went outside the wire,&#8221; said Capt. Thomas Reddick, who served as a platoon leader in Company B.

The patrols his soldiers took part in often lasted anywhere from a week to two weeks at a time, during which the 165th troops gathered information that led to the capture of insurgents and weapons, said Reddick.

The company weathered frequent rocket attacks, and several of its convoys were hit with roadside bombs.

Knowing what waited for them outside the wire helped the soldiers of Company B as they headed out on patrols. Many of the company&#8217;s soldiers, including Reddick, earned the combat action badge for engaging in gun battles with Taliban and other insurgents.

Most of the unit, though, was stationed at Baghram Air Base, located in the northeast part of the country. There, insurgent activity was sparse and life for the soldiers calm.

As a .50-caliber gunner on convoys in both Iraq and Afghanistan, Sgt. Donald Sewell gauged the situation around Baghram on how close he kept his finger to the trigger.

&#8220;Iraq was way more tense,&#8221; said the Middletown, Conn., native. &#8220;You had to stay alert. You were constantly scanning&#8221; for possible targets. In Afghanistan, though, he and his fellow troops were more inclined to wave their hands than their weapons.

Military working dog teams from the 95th Military Police Battalion, deployed to Afghanistan from October 2005 to April, were also recognized during the ceremony. The teams, which detected explosives, provided force protection and supported cordon and search operations and raids against the Taliban.