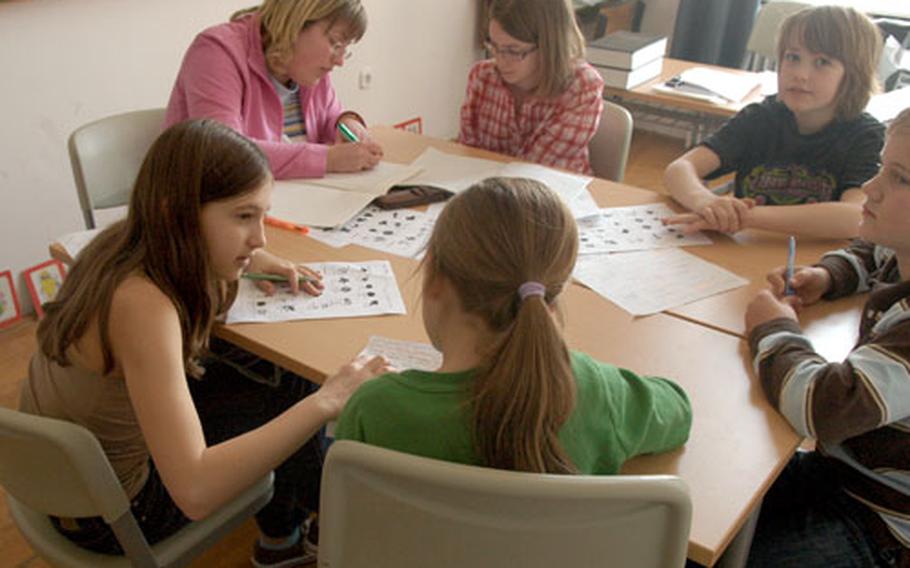 A classroom of American and Swedish children work on their Hungarian language skills, trying to learn the basics as part of a bilingual program at the local primary school. Blending the children from up to 11 countries into the Hungarian school system could be the biggest challenge facing the new Heavy Airlift Wing. (John Vandiver / S&S)

A classroom of American and Swedish children work on their Hungarian language skills, trying to learn the basics as part of a bilingual program at the local primary school. Blending the children from up to 11 countries into the Hungarian school system could be the biggest challenge facing the new Heavy Airlift Wing. (John Vandiver / S&S) 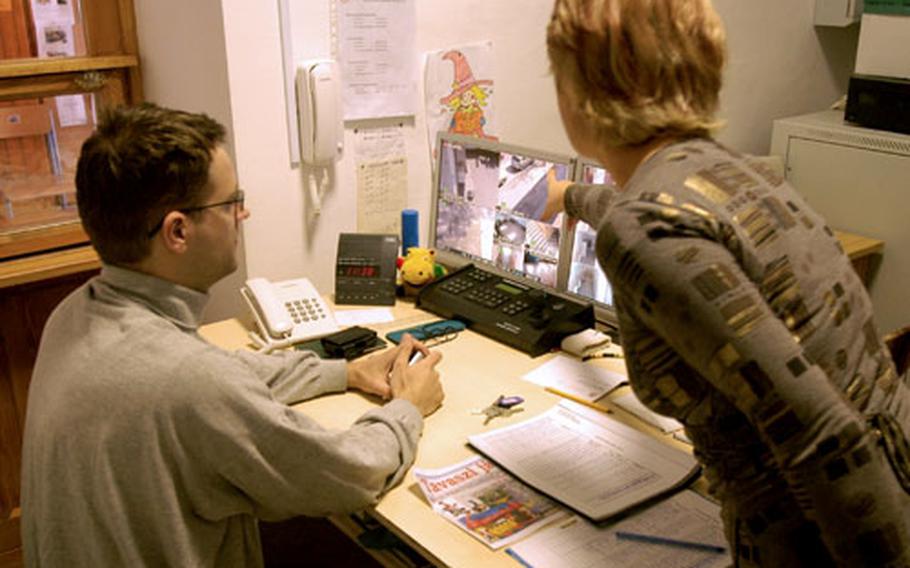 A little taste of America. Tunde Hardi, director of the bilingual program, checks out the security monitor at Tarczy Lajos Altalanos school. The school installed 22 cameras in the hallways, gym and cafeteria as part of an effort to improve security conditions. The extra security was something of particular interest to the incoming Americans. (John Vandiver / S&S)

Now imagine learning those subjects in the seventh and eighth grade, years ahead of the normal trajectory for the average American student. If that&#8217;s not enough, try learning them in a foreign language.

Welcome to the Tarczy Lajos Altalanos School in Papa, where U.S. Air Force members and their peers from 11 other nations are building a multinational heavy airlift wing.

The Strategic Airlift Capability project is getting close to its first mission. But perhaps the group&#8217;s most complicated task is integrating children from many countries into the Hungarian school system.

"The schools, that is the most important thing for the future existence for this organization," said Lt. Col. Tom-Ivar Punsvik, the senior leader from SAC&#8217;s Norwegian contingent. "That is my concern. If I don&#8217;t have the families happy, then I don&#8217;t have workers here. I won&#8217;t be able to recruit anyone to come to Papa."

That could put the future of the project at risk.

When it reaches full capacity later this year, the SAC will include about 150 airmen from the 12 partner countries and another 75 contractors. The tours are accompanied and range from three to four years. It&#8217;s not yet clear how many children will be enrolled in Tarczy Lajos or the high school, though early estimates are about 100 for next school year.

Currently, a small group of mainly Swedish American, and Norwegian students are already enrolled at Tarczy Lajos, and leaders are gauging how things will work.

Swedish Lt. Col. Tommy Johansson, who works in the wing&#8217;s family support section, said the school situation has gotten off to a rocky start.

"It&#8217;s very complicated. The teachers are doing their best, but there&#8217;s so much bureaucracy," said Johansson, who argues that the Hungarian system needs to be more flexible in meeting the unique needs of its multicultural clientele.

As part of the agreement to host the SAC, Papa town officials agreed to form a bilingual program at schools to accommodate the international group. Half the courses are taught in English and half in Hungarian &#8212; including math and science.

The Norwegians and Swedish members have hired their own teachers to provide additional support, but so far they don&#8217;t have a significant role to play in the school. The Americans haven&#8217;t hired staff since four native English speakers were hired to help staff the bilingual initiative at Tarczy Lajos, which includes first through eighth grade.

Monica Zazworsky, the wife of wing commander Col. John Zazworsky, said it will require some patience to work through the challenges.

"There is room to move on both sides," Zazworsky said.

She said her children have adapted well to their new school and are learning their concepts in math and science.

However, steps must be taken to make sure students get credit for their course work, she said.

"We need to ensure children aren&#8217;t going to be penalized when they go home," Zazworsky said.

How all of that gets worked out remains unclear.

"These kids have different skills, different levels of preparation, different things in their backpack," said Tamas Aldozo, Papa&#8217;s vice mayor. "In some cases they don&#8217;t speak English or Hungarian.

"With new people coming in on rotations, these problems are going to repeat themselves. We have to build a school that will respond to these needs."

Making a curriculum that matches those taught at schools from all the countries involved would be impossible, said Venczel Csaba, the school headmaster.

"It&#8217;s very important that they become familiar with Hungarian," said Csaba, adding that students will be more advanced in math and science when they return to their home countries if they stick to the Hungarian curriculum.

Scott and Donna Jones, whose daughter will enter the sixth grade next year, are moving soon from Southern California to Papa.