Insurgents use Baghdad tactics up north 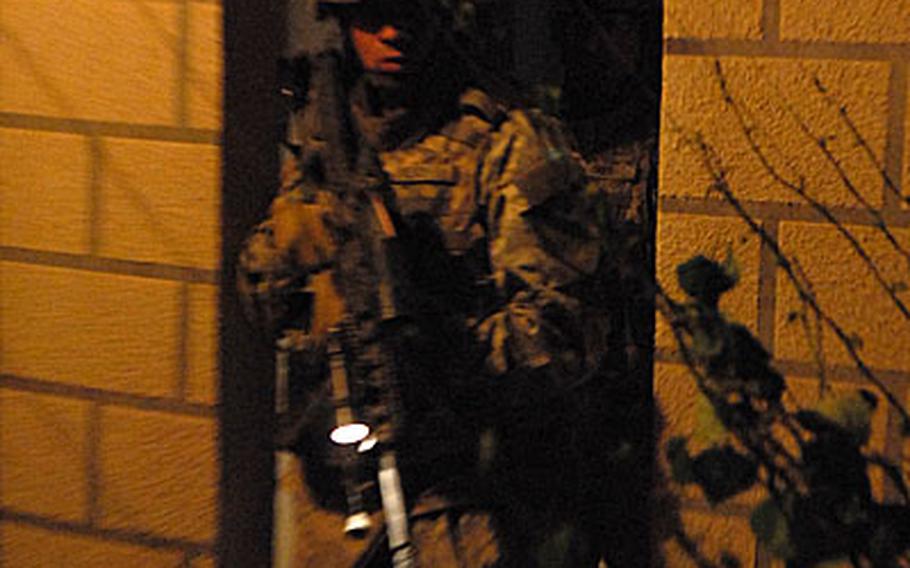 A soldier with the 5th Battalion, 82nd Field Artillery Regiment, 4th Brigade, 1st Cavalry Division is watchful during a raid in the township of Aitha in northern Iraq on Sept 16. (Zeke Minaya / S&S)

A soldier with the 5th Battalion, 82nd Field Artillery Regiment, 4th Brigade, 1st Cavalry Division is watchful during a raid in the township of Aitha in northern Iraq on Sept 16. (Zeke Minaya / S&S) 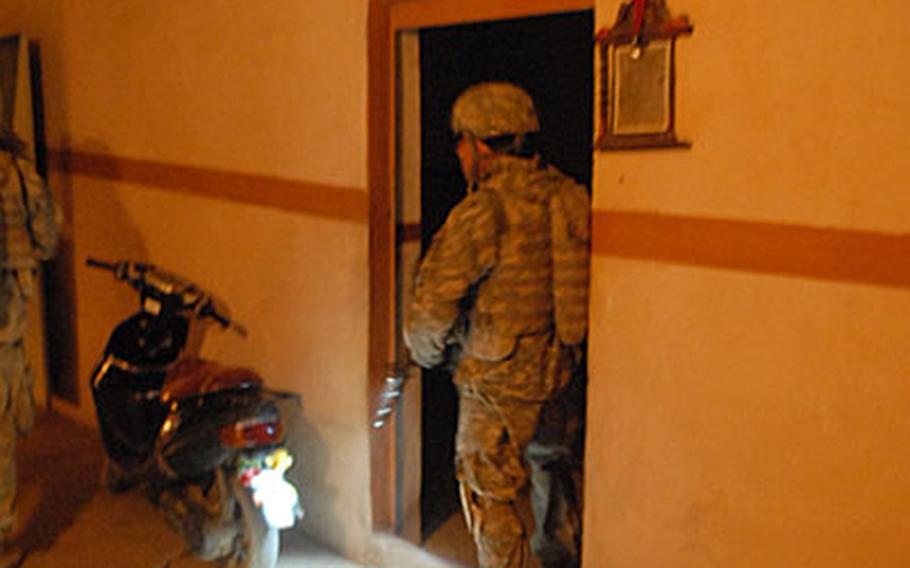 The soldiers were looking for two men believed to have planted a roadside bomb that killed three of their fellow soldiers. (Zeke Minaya / S&S)

AITHA, Iraq &#8212; The soldiers catapulted themselves over crumbling mud walls.

They sprinted across the uneven, rutted ground, dodging mounds of upturned earth and black sewage canals.

They launched themselves at latch gates and metal doors and rushed into homes.

They turned to battering rams and shotgun blasts when the entryways proved stubborn.

&#8220;Motivated,&#8221; an often-used Army word, was the way to describe the soldiers of the 5th Battalion, 82nd Field Artillery Regiment, 4th Brigade, 1st Cavalry Division, as they scoured the rural township of Aitha late Saturday.

Two men they believed were responsible for a roadside bomb that killed three of their fellow soldiers were hiding somewhere, wounded, in the grouping of small, squat houses. The soldiers were determined not to leave empty-handed.

After two years of few casualties, attacks have spiked against the soldiers based in the northern reaches of Iraq at Forward Operating Base Q-West in Ninevah province.

Insurgents, fleeing the heightened presence of American &#8220;surge&#8221; troops in Baghdad and Diyala province, sought refuge in the sparsely populated Zaab triangle, a cluster of three towns &#8212; Aitha, Hechel and Sharqat &#8212; tucked in the Tigris River Valley near the border between Ninevah and Saladin provinces.

The boundary area, a seam in the patrol regions of Iraqi and American security forces, was a convenient safe haven for militants.

But as insurgents were pushed north, officers with the unit said, what was once the home for &#8220;white collar&#8221; operatives &#8212; the financers and planners of Sunni extremists&#8217; attacks in other parts of the country &#8212; also proved fertile ground for the guerrilla tactics so common in Baghdad.

Capt. Iven T. Sugai, commander of Alpha Company, said American soldiers in the area were accustomed to seeing one to two roadside bombs a month before this past summer. But from mid-July to mid-August, 44 roadside bombs had been discovered, he said. In all, five 5-82 FA soldiers have been killed this summer.

Turning up the heatMilitary leaders at Q-West said the unit has gone on the offensive. It has established an outpost at Hechel and launched a series of raids in the last month targeting the Zaab triangle.

Unit leaders said the raised tempo also was in response to the annual increase of attacks during the holy month of Ramadan. &#8220;One hopes that the day will come when people will focus on their faith and not attacks on Ramadan,&#8221; McLaughlin said.

He said that in conjunction with the raids, U.S. Army leaders have continued to try to address the area&#8217;s economic needs to provide an alternative to collaboration with militants.

Operations also serve to run the Iraqi security forces through their paces, he said, as well as increase the American presence among the local communities.

Running down a tipA tip put the unit on the trail of the insurgents blamed for the soldiers&#8217; deaths. The raid late Saturday in Aitha began at the front gate of the doctor whom Americans believed treated the wounded insurgents. The man turned himself in peacefully and was detained for questioning.

The soldiers then swept through the village. Members of the Alpha Company had only just arrived at Q-West from a stint at the Hechel outpost, many had not slept in days and most had not seen a shower or hot meal for some time. That did not matter. The unit tore through Aitha at high speed, intent on their goal.

Soldiers believed that the two who escaped were mortally wounded. But more than a month later, the soldiers received word that the fugitives had been under the care of a doctor in Aitha. On the same day the soldiers learned the whereabouts of the insurgents, a late-night raid was organized.

At one house, soldiers stood on a porch as others searched the home. Gazing out into the darkness, one soldier saw something stirring in the shadows near the base of a wall about 100 yards away. There was someone there.

A shot rang out, aimed at the Americans. The night-crawling prowler had fired at the soldiers and then turned to run. The shooter, a male, was seen only in glimpses as he ran through alternating columns of light cast by porch lights before falling back into shadow. The American soldiers fired at the running figure in unison, but he managed to escape.

The search failed to produce the men responsible for planting the roadside bomb. The soldiers, after several hours of intense searching, boarded their convoy to return to Q-West, many having worn themselves out.

&#8220;No doubt it&#8217;s only human for our guys to be very motivated,&#8221; Sugai said about the search. &#8220;But mostly our goal is to make sure these guys do not get to hurt anyone else. They were wounded pretty badly and we thought they were dead.