Insurgents hiding out in northern Iraq 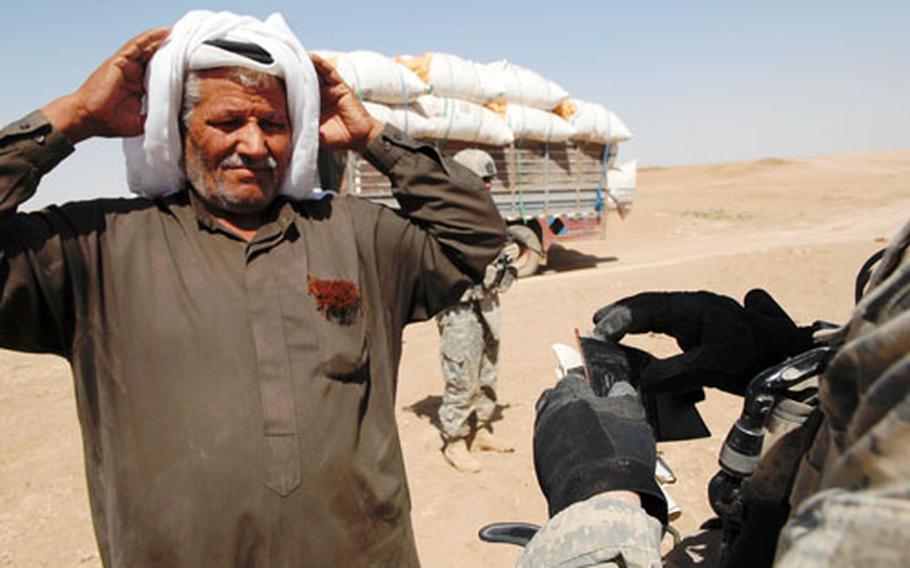 An Iraqi man who was in a semi carrying bags of sugar near a suspicious gas tank Tuesday waits for U.S. soldiers to search him and his truck near Buwayr. Bomb squad GIs exploded the tank, which turned out to be empty. (James Warden / S&S)

An Iraqi man who was in a semi carrying bags of sugar near a suspicious gas tank Tuesday waits for U.S. soldiers to search him and his truck near Buwayr. Bomb squad GIs exploded the tank, which turned out to be empty. (James Warden / S&S) 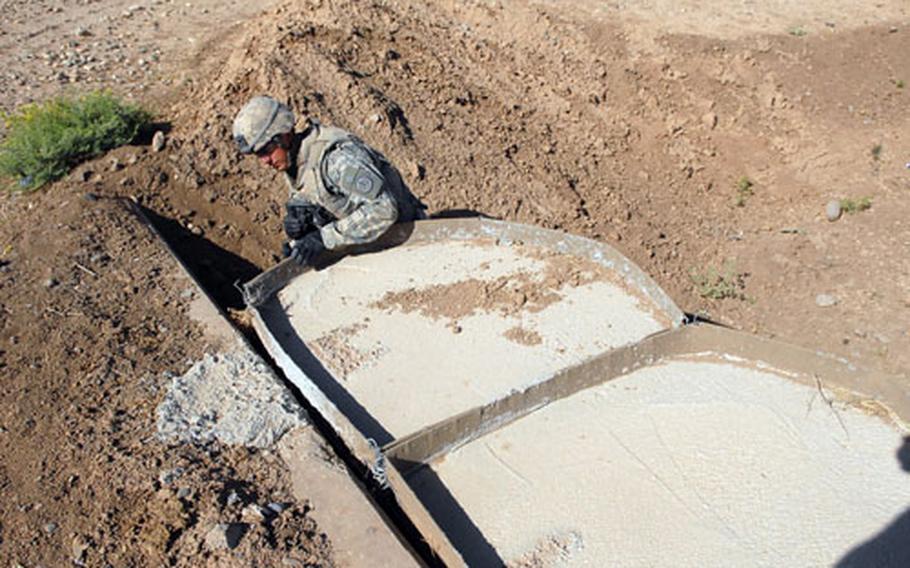 QAYYARAH, Iraq &#8212; If Mosul now, and Tal Afar in 2005, could be considered northern Iraq&#8217;s front lines, then Qayyarah and its environs are as good candidates as any for the insurgents&#8217; home front.

The area is a retreat for insurgents fighting elsewhere, the home of Baathists still upset Saddam Hussein&#8217;s regime was toppled and full of Sunnis who are worried about how they&#8217;ll fare under a Shiite- and Kurdish-run government.

Yet insurgents are, if anything, even more elusive on their home turf. For the most part, they avoid spectacular attacks and force troops to pursue them. While news reports may focus on battles elsewhere, this part of Iraq is at the heart of counterinsurgency operations &#8212; both in northern Iraq and elsewhere &#8212; because of the important routes passing through the area.

Fighters lie low in these areas and eventually return to fight in more contested areas like Mosul &#8212; a philosophy that American soldiers have dubbed "don&#8217;t [defecate] where you eat."

Americans have worked to win over these areas towns by town, and many areas are now stable &#8212; especially cities near combat outposts or Joint Security Stations and those with an Iraqi security force presence.

But a bit farther north, the same troop is having more trouble with Jedda&#8217;a, which has no "Sons of Iraq" presence and is farther from the JSS. Local officials there are asking for more Iraqi security forces, but didn&#8217;t really show an interest in the "Sons of Iraq."

Farther west, Route Tampa, the main north-south route from the Syrian border through Mosul to Baghdad and on to Kuwait, is a magnet for insurgents trying to disrupt U.S. troops. The road is littered with cement-filled craters that testify to past roadside bombs. Troop A commander Capt. Steve Wojdakowski said the attackers have become proficient at targeting logistics and support units and avoiding combat units &#8211; especially those with tanks, Bradleys and other armored vehicles.

Troop A has hit roadside bombs only twice, but the soldiers find something nearly every day. Engineers have put barriers in front of most of the road&#8217;s culverts because insurgents sometimes pack them with homemade explosives.

The desert surrounding Route Tampa also allows foreign fighters to slip in from neighboring Syria, hopping from hamlet to hamlet as they make their way to larger cities like Mosul. Villagers reeling from the recent dry winter often take insurgent money to hide these fighters or set up roadside bombs in order to feed their families, officials said.

The lack of water has forced people to spread out across the land, creating many small villages rather than a single large city. Many of these villages haven&#8217;t seen American troops from 2003 until recently.

"We&#8217;re starting from scratch in a lot of places," Wojdakowski said.

More security in the area could help limit attacks, but the Iraqi army brigade here sent two of its four battalions to help police Mosul. One 11-kilometer stretch of Tampa has no checkpoints, and not surprisingly is the site of most attacks.

The Tigris River cities could face their own security problems when the "Sons of Iraq" contracts expire in October. The plan is to transfer many of these volunteers to the Iraqi police and Iraqi army.

But more pessimistic American commanders expect only between 30 percent and 40 percent to transition over. Many of the men can&#8217;t meet the education requirements and most have no desire to be sent to another part of the country.

Help is expensive with so many scattered villages, and American officials are slowing the flow of money into Iraq as part of efforts to transition responsibility to the Iraqis. All Iraqi government money flows down from Baghdad, though, and it is often slow to percolate to the provinces.

Civil affairs soldiers explain the funding change to Iraqi residents who ask them what&#8217;s taking so long. Yet the Iraqis see American faces even when their government is footing the bill, because U.S. soldiers meet with residents about their needs and scout out possible project sites.

Dorame, Wojdakowsi and other American leaders sometimes remind disgruntled Iraqis that their government is collecting millions per day from oil that should go into funding the projects &#8212; a frequent gripe of American soldiers at all levels.