Insurgents attempt a surge of their own 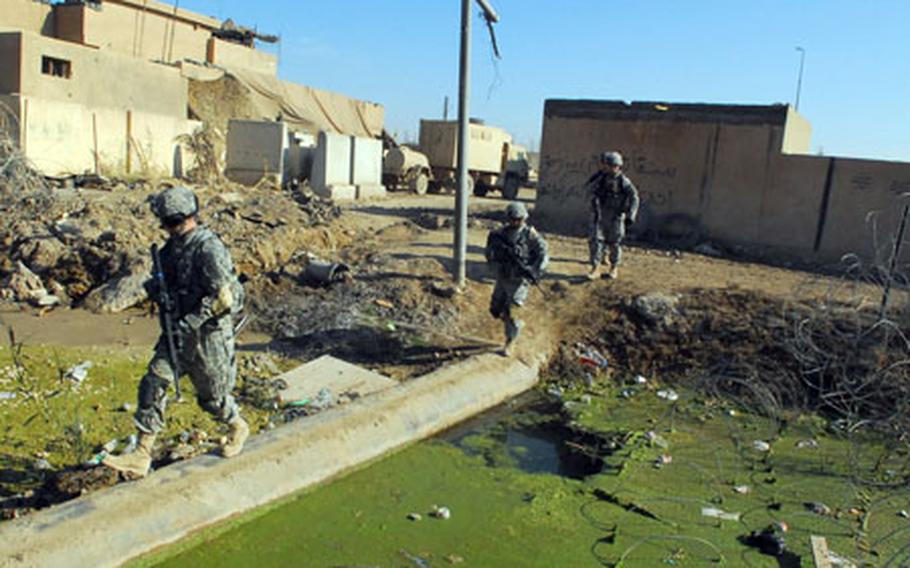 RAMADI, Iraq &#8212; The 3rd Infantry Division has fought two previous tours in Iraq, but as Lt. Col. Mike Silverman and his &#8220;Speed and Power&#8221; soldiers are quickly learning, the enemy in this battered city is unlike that of previous tours.

As U.S. troops in Baghdad are attempting to quell a bloody sectarian war between rival Sunni and Shiite religious sects, soldiers of the 1st Brigade Combat Team, 3rd Infantry Division are squaring off against a determined force of Islamist militants belonging to al-Qaida in Iraq and other terror groups.

Unlike insurgents in many other areas of Iraq &#8212; who often melt away into the landscape after sudden roadside bomb attacks or drive-by shootings &#8212; brazen, sustained attacks appear to be the hallmark of insurgents in Ramadi.

Commanders hope to capitalize on gains made, but are now countering an anticipated surge in enemy attacks. While it is customary for enemy forces to increase attacks on troops who have recently rotated into Iraq, officers here say Islamist fighters have launched a particularly fierce offensive against U.S. troops and cooperating tribes.

&#8220;Basically, al-Qaida in Iraq and these other groups have been reading about the surge in Baghdad, and they&#8217;ve been hearing what President Bush is saying. We think now that they&#8217;re trying their own surge,&#8221; Maj. Charles Krumwiede, the battalion operations officer, said.

The recent car bomb assassination of a highly skilled Iraqi Police commander and another such attack on an Iraqi Police post Monday were part of this three-pronged enemy offensive, according to commanders. The offensive, they said, was aimed at intimidating local residents from cooperating with new Iraqi Police or U.S. forces, assassinating Iraqi Police and government leaders, and attacking U.S. troops.

Commanders said a series of ongoing, coordinated operations between units throughout Ramadi would help to destabilize the enemy. At the same time however, Silverman said he and other commanders were not about to underestimate their foes.

During the 3rd ID&#8217;s 2005 deployment to the areas of Balad, Tikrit, Samarra and Beiji, it was common for groups of 15 or 20 attacking insurgents to flee after two or three of them had been killed. Here, however, the same sized group will press their attack until most of them have been cut down, commanders say.

In a vivid example, officers said that U.S. snipers methodically killed 10 insurgent attackers recently as they attempted to crawl up a creek bed toward a combat outpost downtown.

The phenomenon, officers say, is linked to a breakthrough alliance here between U.S. forces and a majority of local tribes who once aided the Islamist groups. Until late last year, more than two-thirds of enemy fighters here were considered to be local Baath Party loyalists and/or from criminal groups. Now many of those local tribe members have opted out of the fight or joined the Iraqi police.

Those enemy who remain, officers say, are mostly hard-core Islamists who are increasingly desperate to break the alliance between tribes and the coalition.

As such, units like Silverman&#8217;s 3rd Battalion, 69th Armor Regiment, are encountering an enemy he and other officers describe as highly experienced, religiously zealous and organized along traditional military lines.

&#8220;It looks to me like they operate very much the way we do,&#8221; Silverman said. &#8220;There is a battalion-level emir who comes up with a vision for the battlefield. They issue guidance to cell leaders who function fairly autonomously. They would be like company commanders in our operations. Most of the attacks are then committed by lower platoon-level fighters.&#8221;

After years of combat in Ramadi, enemy fighters here are among the most experienced in Iraq. They are drawn from a steady pool of local and foreign Islamists attracted to Ramadi because it symbolizes, for them, the center of the fight against the U.S. and the west in general.

By the same token, U.S. troops here say they take satisfaction in knowing that those fighters they kill or capture are part of al-Qaida and its many associated groups.

Over the past few years, Ramadi has functioned as a de facto training camp for these Islamist fighters, commanders say. Those who pass the course survive; those who don&#8217;t, die.

In Silverman&#8217;s area of operations, there are perhaps 100 or 200 such fighters, operating in autonomous cells, and communicating via couriers or Internet cafes.

The previous unit in Ramadi, the 1st Brigade Combat Team, 1st Armored Division, has been credited with significant gains over the past eight months by establishing a network of joint security stations throughout Ramadi&#8217;s downtown &#8212; an area that was once controlled mostly by the enemy.

The number of police has increased from just over 200 eight months ago to roughly 4,500 today. While this has done much to stabilize western and northern Ramadi, areas like downtown, which lacked a tribal structure, remain contentious.