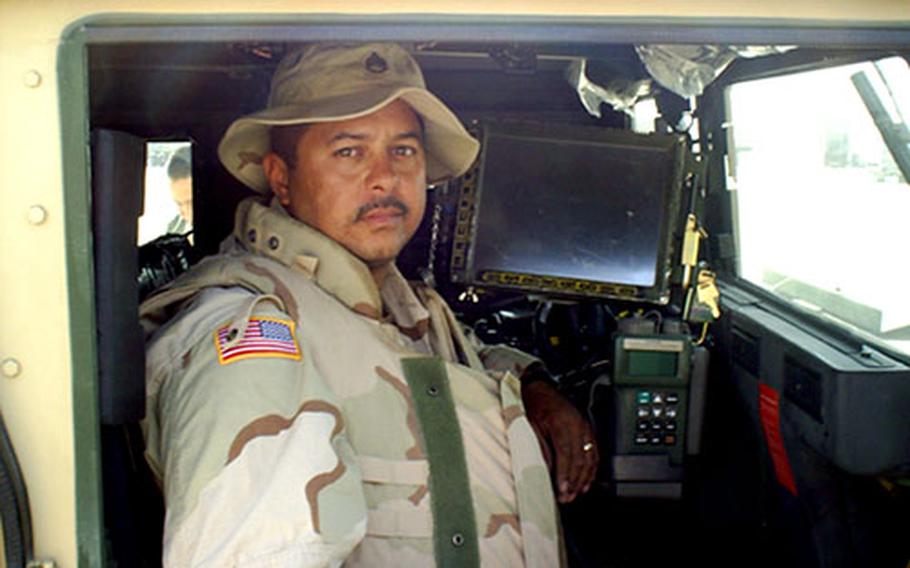 Army Staff Sgt. Henry E. Irizarry, 38, of a scout platoon of the 1st Battalion of the 69th Infantry Regiment, New York National Guard, was killed Dec. 3, when a roadside bomb exploded as his unit patrolled near Taji, Iraq. Last month, an Iraqi court sentenced his attacker, Ziyad Hassan, to 15 years in prison without possibility of parole. (U.S. Army photo)

Army Staff Sgt. Henry E. Irizarry, 38, of a scout platoon of the 1st Battalion of the 69th Infantry Regiment, New York National Guard, was killed Dec. 3, when a roadside bomb exploded as his unit patrolled near Taji, Iraq. Last month, an Iraqi court sentenced his attacker, Ziyad Hassan, to 15 years in prison without possibility of parole. (U.S. Army photo) 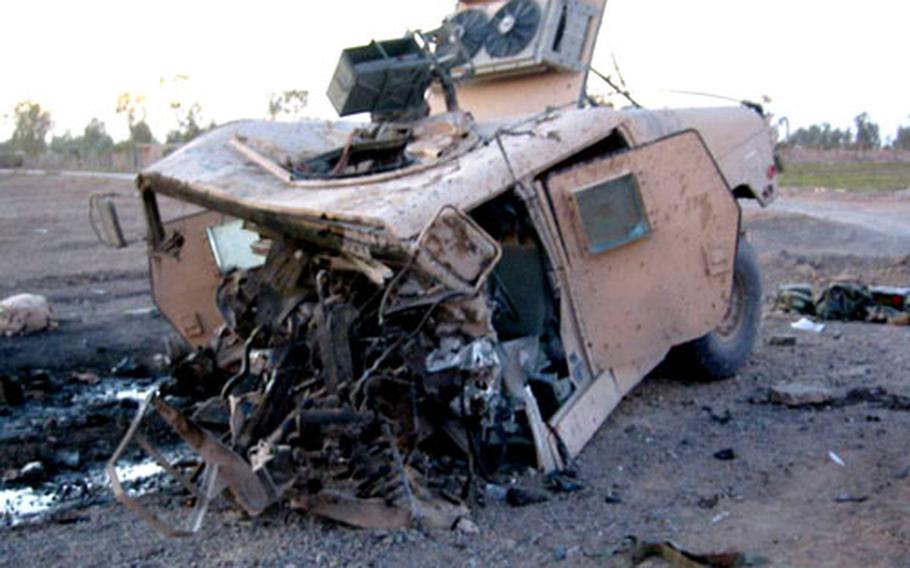 Irizarry’s Humvee was destroyed by the bomb. Irizarry died and three other members of the scout platoon were injured. (U.S. Army photo)

BAGHDAD &#8212; Spc. Jared Frenke was in the turret that day, the gunner in the third truck of a four-Humvee convoy headed back to base after patrolling Taji all day.

He reached down for a cigarette, then looked up. A tire was flying more than 100 feet over his head. He turned around.

Behind him a nightmare burned. A roadside bomb had blown off the front half of the convoy&#8217;s last truck, hitting four members of the scout platoon with the 1st Battalion of the 69th Infantry of New York&#8217;s National Guard.

Frenke&#8217;s truck stopped while the two lead vehicles circled back. They found men with broken and missing limbs, burns scarring their faces, a gunner with a broken neck.

While nearly everyone else helped the wounded, Frenke, a 23-year-old specialist from New York City, kept his eyes and gun trained on a nearby field. It paid off: He saw one man pop up from an empty field full of canals and crisscrossed with berms.

With Frenke&#8217;s persistence and with help from a couple of helicopter pilots from 1st Calvary&#8217;s aviation brigade, they were able to chase the guy into a nearby village and run him down. By the time they got near him, the whole village was watching.

That capture on Dec. 3, along with witness statements and evidence gathered from the scene, added up to a rarity in Iraq, U.S. military officers say. Last month, an Iraqi court convicted Ziyad Hassan of murdering Staff Sgt. Henry E. Irizarry, a 38-year-old and a member of the scout platoon who died that day.

On May 25, Ziyad got 15 years by this new justice system where American military lawyers are working with Iraqi prosecutors and judges to punish crimes against U.S. and other coalition forces.

But for Frenke and his fellow soldiers, it&#8217;s a system with little consolation.

The scout platoon soldiers are angry that Ziyad received 15 years without the possibility of parole, instead of the maximum of 20, which Iraqis consider a life sentence. The soldiers also are mad that Ziyad&#8217;s brother, who tried to help Ziyad run away that day, was acquitted because Iraqi law allows family members to aid each other even after one has committed a crime, according to U.S. Army prosecutors.

Lt. Col. John Dunlap, the chief of staff for the judge advocate office of the 256th Brigade Combat Team, shares some of their anger. Dunlap&#8217;s staff built the case against Ziyad and handed it to the Iraqi prosecutors. They too were disappointed that only Ziyad was convicted.

But Dunlap, a 42-year-old lawyer from Baton Rouge, La., sees a little more hope than Frenke and Olmo.

In December, as soon as Dunlap heard that Ziyad was in custody, his office moved quickly to bring the case before the Centralized Criminal Court of Iraq. The court was created by coalition forces but run by the Iraqis to prosecute those who harm American and other foreign units here, he said.

The entire process was new to Dunlap and his staff.

&#8220;We didn&#8217;t really understand how it all worked,&#8221; he said. On their first day in court, the American military prosecutors were unsure where to sit.

But the Americans were confident in the evidence they&#8217;d gathered &#8212; witness statements, test results from explosives found on the suspects, pieces of the ruined Humvee. Iraqi prosecutor tried twice to get the case dismissed, but the American lawyers fought it and the Iraqi judges ultimately opposed the motions both times.

The centralized court has no jury and allows for little argument in its proceedings, Dunlap said. Each side, in separate hearings, presents its evidence without questions from the opposing side.

In the end, a three-judge panel reached a guilty verdict and sentenced Ziyad, Dunlap said.

Irizarry was from the Bronx. He was married with five children and a grandchild on the way, members of his platoon said. He was scheduled to go on leave a week after he got killed.

Last week, Dunlap listened to Olmo and Frenke talk for an hour about the attack and its aftermath.

It was the first time the officer had heard directly from any of the soldiers in the case. Dunlap didn&#8217;t try to explain away the younger men&#8217;s anger or their disappointment in the system.

Frenke said that he appreciated the military prosecutor&#8217;s hard work on the case. He also credited one of the helicopter pilots, who stayed an extra week after his deployment time was up just to testify.

But he said he&#8217;d rather the case had been settled on the field that December day, where military rules allow for an answer to a bomb from a gun rather than a panel of judges.