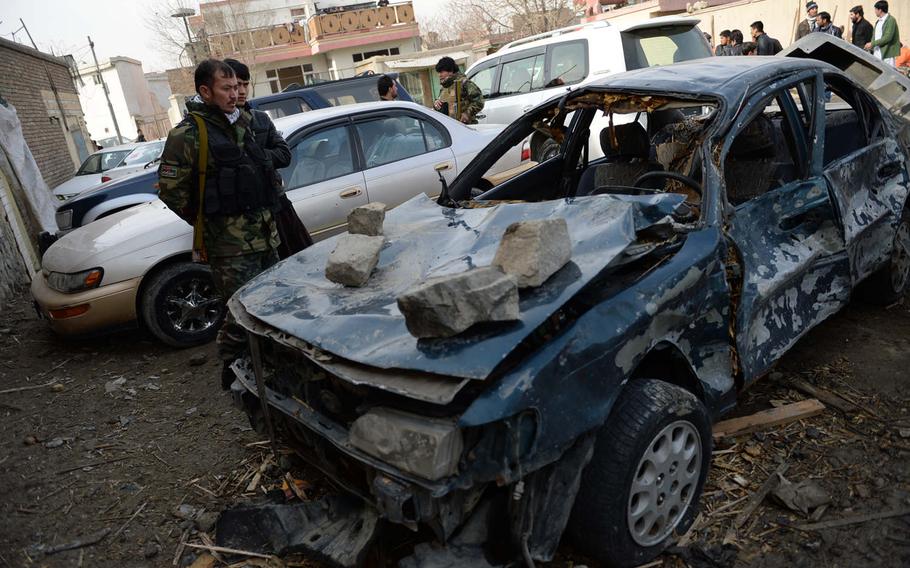 Two men look at a car destroyed by a deadly bomb attack against a Kabul restaurant popular with foreigners and wealthy Afghans. The Taliban claimed responsibility for the New Year's Day attack, which came a day after Afghan President Ashraf Ghani announced an effort to restart peace talks with the insurgent group. (Heath Druzin/Stars and Stripes)

An official with Hezb-e-Islami said Monday that his group is open to participating in peace talks, though he said positive results would depend on the departure of foreign troops from the country.

“Hezb-e-Islami believes in negotiations, and there should be all involved sides included in the peace talks,” Ghairat Baheer, Hezb-e-Islami’s head of political affairs, said in a telephone interview with Stars and Stripes. ”The peace talks must be owned by Afghans, and there is a lot of homework needed for it.”

The declaration was the first hopeful sign after the four violent days since Afghan President Ashraf Ghani announced a four-country meeting to establish a framework for a peace deal between Kabul and insurgent groups. Representatives from the Afghan, U.S., Pakistani and Chinese governments are to meet next week in Islamabad, Pakistan.

The day after Ghani announced the talks, New Year’s Day, a suicide bomber targeted a Kabul restaurant popular with Afghan elites and foreigners. On Sunday, militants launched a complex attack on the Indian consulate in the northern city of Mazar-e-Sharif, which continued into the next day.

And on Monday, two suicide car bombs detonated two hours apart on the road to a military base attached to Kabul’s airport. The second one killed at least two people and injuring several more, police said. The target was almost the same spot hit a week earlier by another bomber, who killed one civilian and injured dozens more.

Unlike the Taliban, who have waged open warfare against Afghan security forces, Hezb-e-Islami has a policy of attacking only foreign targets. It and has long been seen as the insurgent group most open to reconciling with Kabul. A political party connected to Hezb-e-Islami has seats in parliament and ran a candidate in the last presidential campaign.

Baheer, the Hezb-e-Islami official, said it was too early to know if the group’s leader, Gulbadin Hekmatyar — a former Afghan prime minister, warlord and anti-Soviet fighter — would directly participate.

Participation by the Taliban, by far the largest insurgent group in the country, is crucial for any peace talks to gain momentum. So far, the Tailban have declined to comment on the possibility of a peace process. The group’s new leader, Mullah Akhtar Mansoor, has both urged his men to continue fighting made statements suggesting he’s open to negotiation.

Further clouding the landscape are divisions within the Taliban since the news this summer that longtime spiritual leader Mullah Mohammad Omar had been dead for two years. Last month, there were reports that Mansoor was killed or badly wounded in a shootout in Pakistan with members of a rival Taliban faction, which was denied in an audio recording purported to be of Mansoor.

U.S. and Afghan military and political leaders have said for years that the only way to end the war, now in its 15th year, is a peace agreement that includes a political settlement. That prospect has proved elusive. There was hope in 2013 when the Taliban opened a political office in Doha, Qatar, a key step toward negotiations. But when Taliban representatives raised the group’s white flag, then-Afghan President Hamid Karzai cut off further talks.