Instant loans a dangerous temptation for servicemembers in Pacific 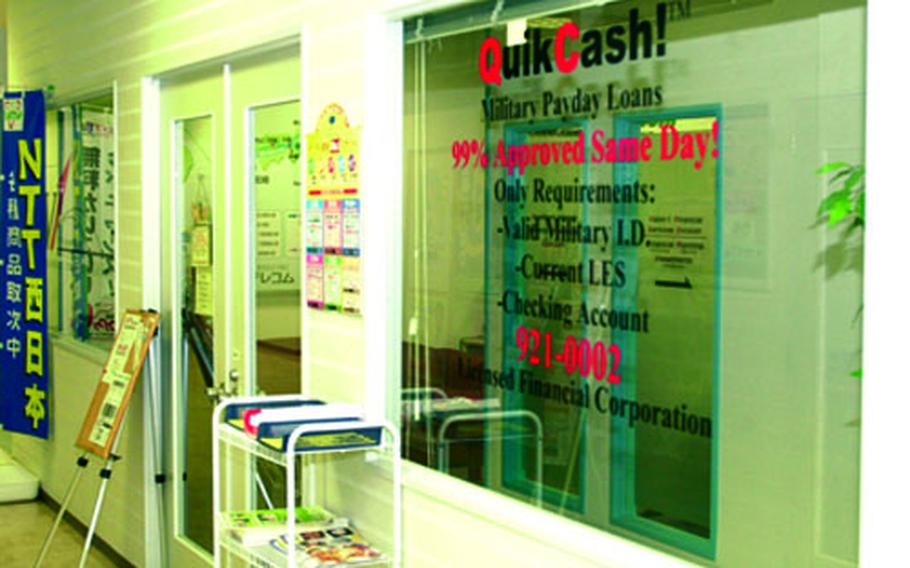 The lure of a quick $500 in cash without much hassle is too seductive for some servicemembers to ignore, even if it could put them perpetually in debt.

Customers at Quikcash, located at the Korinza Mall near Kadena Air Base&#8217;s Gate Two, can borrow against their next paycheck by paying $20 for each $100 borrowed, plus a $5 transaction fee and a $5 membership fee.

&#8220;It varies how many servicemembers use our services, but on average we have more than 20 each month,&#8221; said Quikcash manager Mika Uehara.

Concerned over popularity of the cash advance companies, military support groups, defense department officials and lawmakers are all looking for ways to keep servicemembers from turning to the instant loan stores and risking financial problems.

In the United States, Army Emergency Relief has begun a pilot program at six bases with no-interest, $500 loans for soldiers who need quick cash. Last year, the Pentagon Federal Credit Union began its own pilot program, offering cash advances up to $500 to servicemembers with a one-time $6 fee and financial counseling.

&#8220;Creditors are a lot like first sergeants, in that they both have vivid imaginations and assume the worst if you don&#8217;t communicate with them,&#8221; Heppe said. &#8220;Let them know you are trying to deal with your debt, and that you have a budget reviewed by a financial counselor.&#8221;

Most servicemembers don&#8217;t get paid any more the next week than they did during the week of the loan, leaving them right back where they started &#8212; broke and in debt.

To prevent a debtor from declaring bankruptcy, most creditors will agree to lower payments for servicemembers in financial distress, if they only ask.

Michael Zdanovich, assistant manager at the Navy Federal Credit Union Camp Foster branch in Okinawa, said a servicemembers could obtain an unsecured $500 signature loan at a 12 percent annual percentage rate and still pay half as much in interest over one year as they would at Quikcash in less than two weeks, assuming prompt repayment.

But long-term loans aren&#8217;t a desirable option for troops with an immediate financial need, according to Steven Schlein, spokesman for the Community Financial Services Association of America, the industry&#8217;s national trade group.

The immediacy of the instant loans make them an important option, Schlein said, since traditional bank loans can take days or weeks to be approved.

A CFSAA study released this month estimates that less than 4 percent of active-duty personnel have used a cash-advance loan in the last four years. A New York Times analysis of the industry suggests around 26 percent of military households have borrowed cash from an instant-lending company in the past.

Defense Department officials have labeled payday lending as a serviceswide concern, and are working with several state governments on education campaigns and financial alternatives for troops, according to department spokeswoman Lt. Col. Ellen Krenke.

In addition, Defense Department officials have also launched the Military Saves Campaign to combat the need for instant loans.

The program, launched with the Consumer Federation of America and Defense Credit Unions and Military Banks, outlines ways for families to develop an emergency savings fund to cover short-term emergency costs.

Under the Service Members Civil Relief Act, servicemembers can also, by law, have debt incurred prior to joining the military reduced by 6 percent, Heppe said.