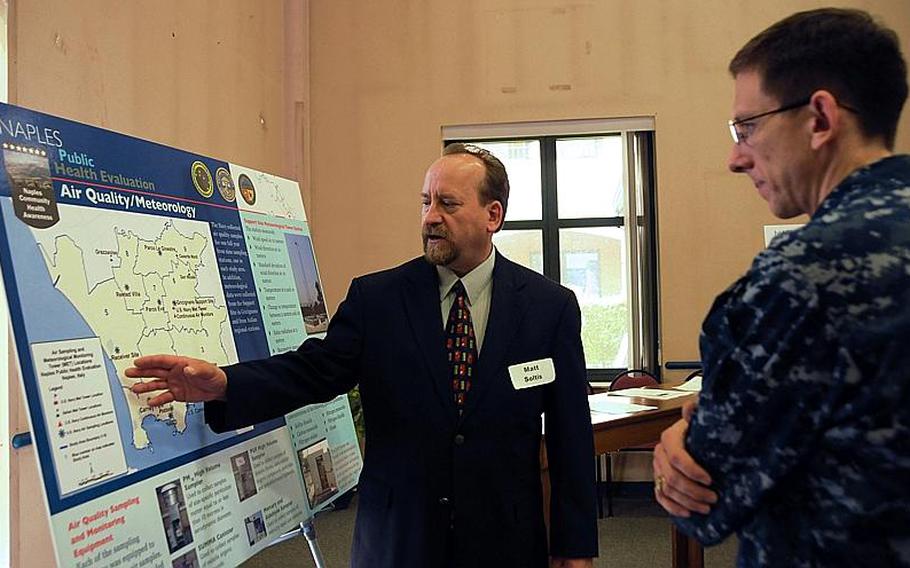 Buy Photo
Matthew Soltis, vice president of the environmental company Tetra Tech and a project manager for the Naples Public Health Evaluation, explains results of a year-long air monitoring study his company performed to determine if Naples' air quality posed a health risk to Naples families to Lt. Cmdr. Rick Larson, a base official attending an open house on the review. (Sandra Jontz/Stars and Stripes)

NAPLES, Italy &mdash; The U.S. Navy has announced plans to hire a water safety inspector to randomly inspect off-base housing to ensure water quality and a liaison to work with Italian health authorities as part of long-term efforts to safeguard the health of servicemembers in a city known for its trash disposal problems and concerns about exposure to hazardous chemicals.

The U.S. Navy recently completed a three-year health study to determine whether living in Naples poses a hazard to servicemembers and their families. As a result, the Navy has implemented a series of what it is calling &ldquo;enduring processes&rdquo; aimed at mitigating potential problems associated with life in Naples. Earlier, the Navy implemented other practices, such as recommending off-base tenants cook with and consume bottled water only, and implementing strict regulations that landlords of off-base housing must follow to ensure water and soil are safe.

The Navy spent $30 million overall, funds that paid for scientific analyses, air and meteorological monitoring systems, distribution of bottled water to off-base residents, new water systems, and the relocation of 60 households from homes deemed unsafe, according to several officials interviewed.

In addition to receiving help from the new hires, newly arriving troops will get a detailed rundown of the study&rsquo;s results and how to safeguard their health during area orientation seminars. Officials also want to develop an online informational lecture sailors and families can peruse before moving here, officials said.

As of April, tenants are allowed to accompany housing inspectors on safety inspections, primarily to learn how to determine if water to houses is supplied by municipal water or by wells. In November 2008, the Navy no longer allowed members to rent houses supplied by illegal wells because of the likelihood of contaminants.

While the average tour in Naples is 2.8 years, roughly 6 percent of the population, mostly civilians, live here for six years or longer. So for them, the Navy is working on a tutorial program to serve mostly as a reminder of how to safeguard against some of the potential health hazards.