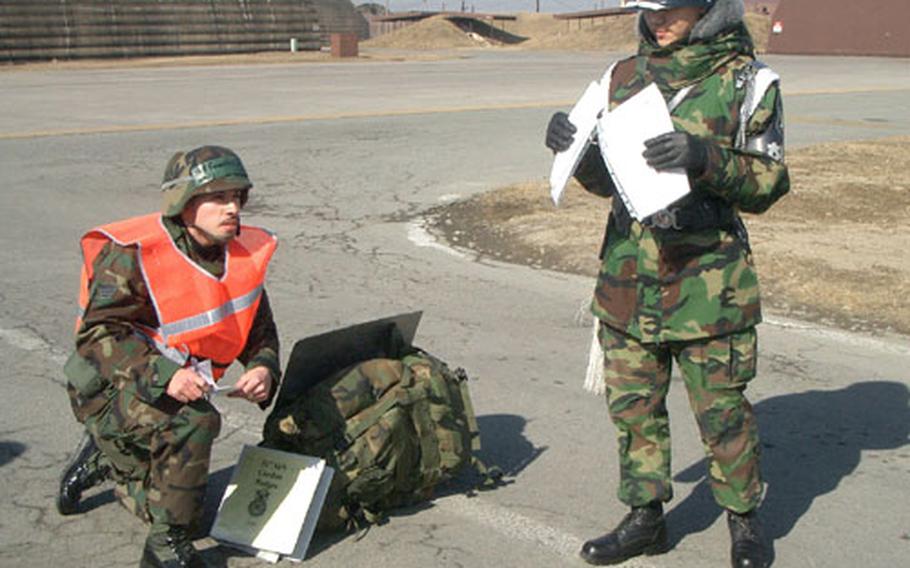 Members of the 51st Figher Wing go through a series of cordon drills during an Osan Air Base inspection last week. (Courtesy of 51st Fighter Wing Public Affairs)

OSAN AIR BASE, South Korea &#8212; Nearly 100 U.S. Air Force inspectors are on the Korean Peninsula this month for intensive inspections of the U.S. fighter wings at Osan and Kunsan air bases.

In a weeklong process called a Unit Compliance Inspection, the inspectors look at whether units are meeting policies and rules of the Department of Defense, the Air Force and Pacific Air Forces.

From Tuesday through Saturday, the inspectors will conduct an inspection of the 8th Fighter Wing at Kunsan.

Last week, they inspected the 51st Fighter Wing at Osan Air Base, based 48 miles from Korea&#8217;s Demilitarized Zone and thus the most forward-based permanent wing in the Air Force.

&#8220;This inspection is to make sure that we&#8217;re all playing from the same sheet of music. And you can imagine from a command-and-control perspective how important that is.&#8221;

The inspection also features a major accident response exercise, which tests emergency response teams and others. The inspectors don&#8217;t tell the unit beforehand what type of emergency they&#8217;ll face or when it will occur.

At Osan last Monday, the MARE entailed a simulated hostage situation in which a man armed with explosives boards an Air Force bus with about a dozen people aboard.

&#8220;It tested everything on base from security forces to commanders to fire department and also to those on base responsible for identifying remains,&#8221; said 1st Lt. Thomas R. Montgomery, a 51st Fighter Wing spokesman.

The inspectors present the commands with their findings, spelling out anything they may need to improve, and highlighting things done especially well. The report also goes to higher headquarters within the Air Force.

Units can receive a grade of outstanding, excellent, satisfactory, unsatisfactory or marginal.

Osan will get its grade during Tuesday&#8217;s outbriefing. Kunsan will receive its grade Feb. 24.