Injuries aside, war on terror veterans move on to marathon 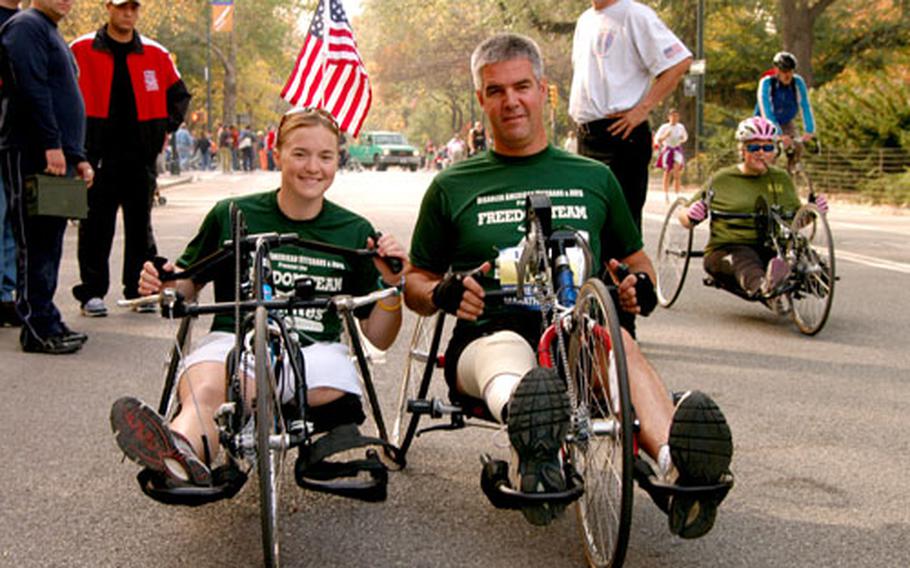 Imagine running 26.2 miles with a prosthetic leg, or navigating such a race in a wheelchair or a hand-crank chair. On Sunday, 35 servicemembers, wounded in the war on terror, were to compete in the New York City Marathon.

These individuals traveled to the Big Apple from military hospitals across the United States to be part of the Achilles Track Club and the Wounded Warriors Project. Both programs work with the Walter Reed Rehabilitation Program, designed to improve the quality of life for recently wounded troops.

&#8220;The whole rehabilitation model has been a sports model. The goal has been to keep the servicemember involved with the military. It fits right in,&#8221; said retired Army Capt. Jack Farley, an amputee from the Vietnam War involved with peer visiting at Walter Reed Army Medical Center in Washington.

While the marathoners are in New York, they stay for free at the Soldiers&#8217;, Sailors&#8217;, Marines&#8217; and Airmen&#8217;s Club (SSMAC) located in midtown Manhattan. The club, founded in 1919, is open to active duty personnel, veterans, military cadets and military personnel of U.S. allies.

&#8220;The club will take care of them all weekend at our expense,&#8221; said Peter LeBeau, executive director of the club.

This is the third year SSMAC has hosted the athletes.

&#8220;They come to us from Walter Reed and Bethesda [Naval Hospital in Maryland], Balboa [Naval Medical Center in San Diego] and Brooke Army Medical Center [in San Antonio]. They come to compete &#8230; and they all finish,&#8221; LeBeau added.

Retired Army 1st Lt. Melissa Stockwell is one of the runners staying at the club. She will be using a hand-crank chair for the second time in the New York City Marathon.

Stockwell lost her left leg from the mid-thigh down while serving in Iraq in 2004. Since then, she has become a dedicated swimmer and has competed in many road races using a hand-crank chair.

While they may not feel sorry for themselves, 26.2 miles is a daunting task.

Farley, 63, is an avid one-legged skier but has never tried a marathon.