Injured military dogs back on duty, but without handler 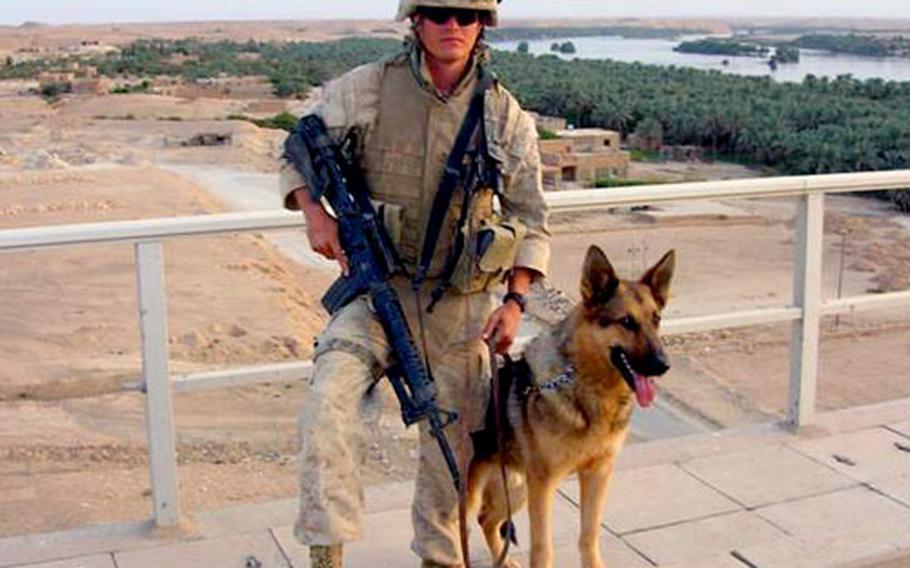 Dog handler Marine Sgt. Adam L. Cann stands with his dog Bruno in Iraq. Cann was killed in a suicide attack this month in Ramadi. (Courtesy of Joseph Manning)

BAGHDAD &#8212; The three military working dogs injured in this month&#8217;s deadly suicide attack on a Ramadi police recruiting event have been treated and returned to duty, medical officials told Stars and Stripes this week.

The bombings, which came at the end of a four-day recruiting drive that saw more than 1,000 Iraqi men sign up as police candidates, killed at least 27 volunteers, U.S. Army Lt. Col. Michael E. McLaughlin and Sgt. Adam L. Cann, a Marine Corps dog handler. Two other dog handlers were injured.

Cann&#8217;s dog, Bruno, and two other working dogs were injured in the blast. Initially, military officials reported that Bruno would be flown to the States for treatment. But in an e-mail this week to Stripes, Dr. (Lt. Col.) R. Randall Thompson, of the 72nd Medical Detachment (Veterinary Service-Forward) said all three dogs were treated in Baghdad by military veterinarians at the 10th Combat Support Hospital in Baghdad.

&#8220;Sergeant Cann&#8217;s canine partner, Bruno, was &#8230; transported to the Military Working Dog referral center located in the International Zone,&#8221; Thompson wrote. &#8220;Bruno was treated for shrapnel wounds and returned to his place of duty five days later. All three injured dogs were treated by the 72nd following [medical evacuation]. All will recover fully. Prior to the arrival of the 72nd and its enhanced treatment capability, they would have been flown [to the States] for treatment.&#8221;

Cann, 23, and his German shepherd were part of the 2nd Military Police Battalion, 2nd Force Services Support Group. Marine dog handlers in Iraq are a tightknit group and have taken Cann&#8217;s loss hard. Friends said he was happiest when he and Bruno were at work outside the wire.

Cann had worked with Bruno for five or six years, including a tour in Afghanistan, they said.