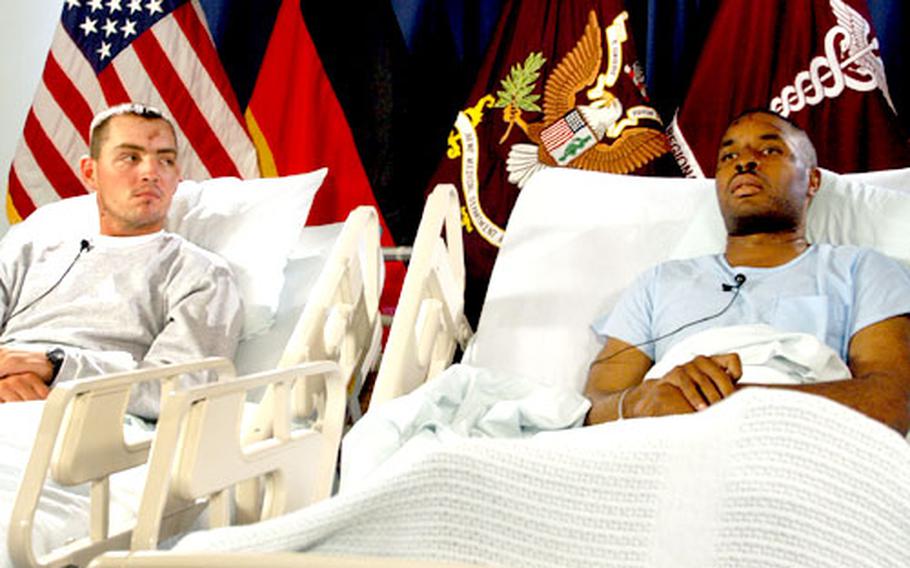 Sgts. Raymond Littlefield, left, and Christopher Nelson talk to the media on Wednesday at Landstuhl Regional Medical Center in Germany. Both were injured when a CH-47 Chinook helicopter was shot down over Iraq on Sunday. Fifteen soldiers died in one of the deadliest attacks against U.S. forces since the war began. (Michael Abrams / S&S)

Sgts. Raymond Littlefield, left, and Christopher Nelson talk to the media on Wednesday at Landstuhl Regional Medical Center in Germany. Both were injured when a CH-47 Chinook helicopter was shot down over Iraq on Sunday. Fifteen soldiers died in one of the deadliest attacks against U.S. forces since the war began. (Michael Abrams / S&S) 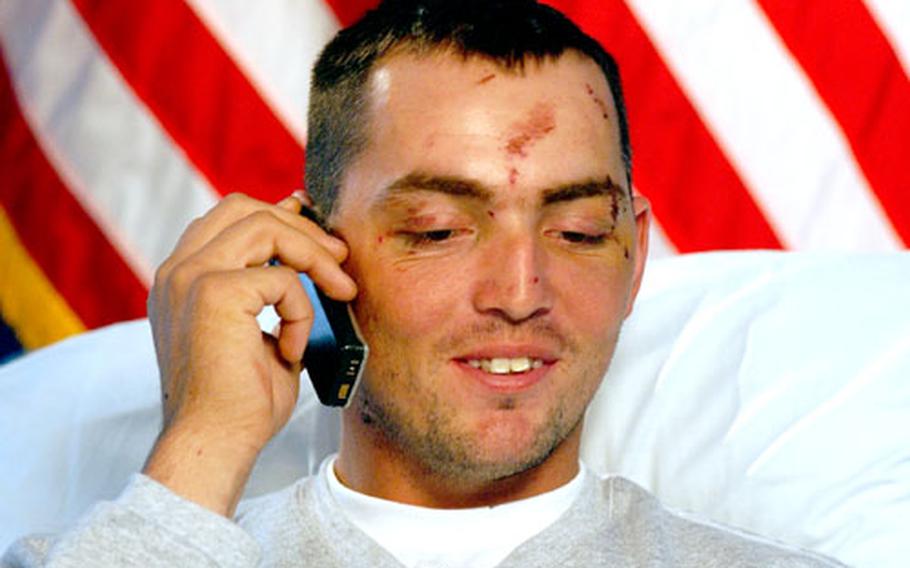 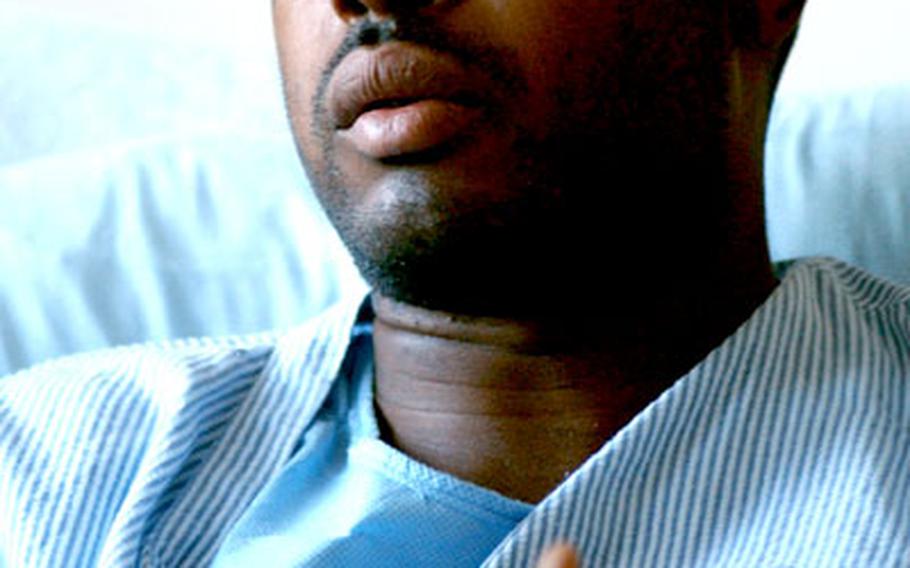 Sgt. Christopher Nelson had never even been on a helicopter before last Sunday, when he climbed on the Chinook that would help get him home.

Trained as a Paladin operator, Nelson had been patrolling and pulling guard duty in Iraq nonstop for more than six months.

&#8220;It started out fine. We were like little kids on a plane ride,&#8221; Nelson, 28, said with a quick smile as he lay in his bed at Landstuhl Regional Medical Center on Wednesday.

Above the thunderous whir of the aircraft rotors, Nelson and his buddies yelled back and forth, shooting the bull as the copter lifted off.

About 12 of the guys from his Fort Sill, Okla.-based 2nd Battalion, 5th Field Artillery, were with Nelson, including a best friend sitting across from him.

The back door of the helicopter was open and lots of soldiers were snapping pictures, said Nelson, of Orange, Texas. A second Chinook carrying other soldiers going on rest-and-recuperation leave in the United States was flying behind them.

All Nelson could think about was seeing his mom in Texas and his two sons.

In the rear, another soldier was also focused on the home front.

Sgt. Raymond Littlefield&#8217;s wife, Dawn, was due to have their third child any day. His name will be Raymond Jr.

Littlefield, an engineer trained to lay land mines and remove obstacles for ground troops, had been in Iraq since April.

&#8220;As soon as I got over being excited then all of a sudden all the other stuff started to happen,&#8221; said Littlefield of the 43rd Combat Engineer Company, 2nd Squadron, 3rd Armored Cavalry Regiment, out of Fort Carson, Colo.

But as he lay in his hospital bed in Germany, Littlefield said he doesn&#8217;t even remember getting on the helicopter &#8212; only being carried off and put into an ambulance.

Nelson remembers what happened to him.

When Nelson opened his eyes, the Chinook had slammed to the ground and he was covered with metal and other bits of debris. People were swarming around him trying to get everybody out. Many of the rescuers came from the second Chinook.

That day, 15 soldiers were killed when the Chinook troop transport crashed near Fallujah. Another 21, including Nelson and Littlefield, were injured. They were taken from field hospitals to the military hospital in Germany for treatment. Fourteen of the injured remained at Landstuhl on Wednesday and the rest have been evacuated to Walter Reed Army Medical Center in Washington, D.C.

Witnesses reported seeing a missile hit the aircraft, but the Army has not yet announced what caused the crash.

Littlefield and Nelson agreed to speak to reporters at the hospital in Landstuhl.

Littlefield, who hit his head and went unconscious after the crash, said he doesn&#8217;t know what caused the helicopter to crash.

Nelson suffered a broken left ankle and a broken hip. It was his second scrape with death in Iraq recently. Two weeks ago, Nelson was riding in a Humvee that ran over a land mine. He was in the passenger seat and was uninjured, but two soldiers in the back seat were hurt.

As he sat under the blankets of his hospital bed, Nelson said he would rather be with his unit in Iraq.

One member of that military family, he said, was killed in the Chinook crash, though he didn&#8217;t feel comfortable talking much about him.

Nelson makes it through the days in recovery, he said, by thinking about seeing his mom and his sons Matthew, 9, and Chris, 4.

While the television cameras were rolling Wednesday, Littlefield made a call across the Atlantic to his wife, who was roused from sleep at 5 a.m.