Inhofe takes over as chairman of Senate Armed Services Committee 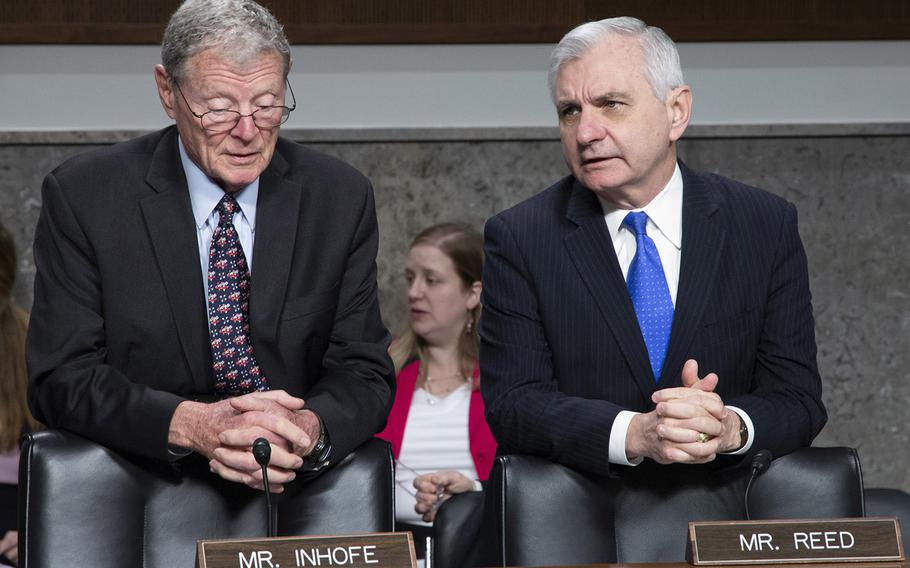 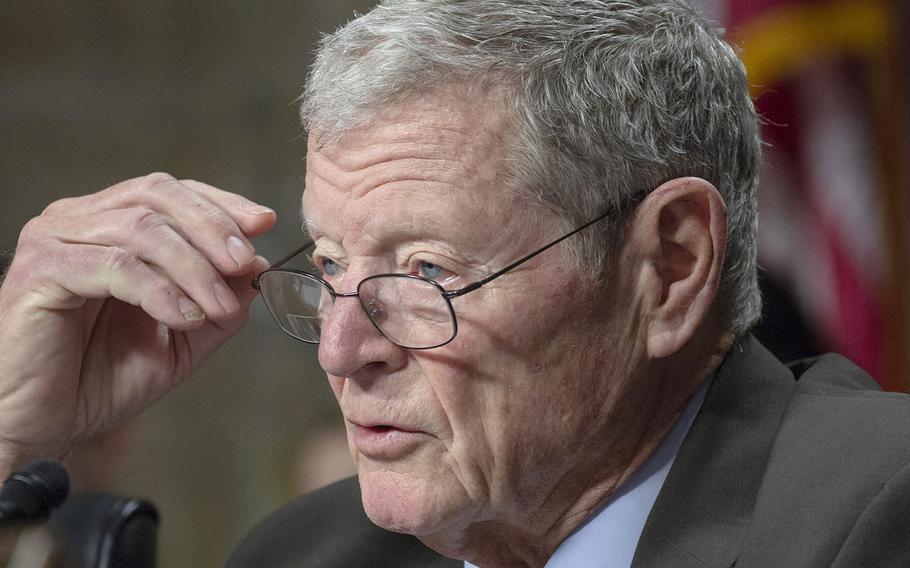 WASHINGTON – Sen. Jim Inhofe, a longtime Republican senator from Oklahoma, will take over as chairman of the Senate Armed Services Committee.

Inhofe, 83, has been acting chairman of the committee, which has oversight of military issues, since Sen. John McCain was forced to leave Capitol Hill in December 2017 due to illness. The Arizona Republican died Aug. 25 at the age of 81 after a 13-month battle with brain cancer.

“Senator Inhofe filled in for Senator McCain during a difficult year,” Senate Majority Leader Mitch McConnell said Wednesday from the floor of the upper chamber. “He rose to the occasion and helped lead the committee in passing crucial legislation that honored the example of his predecessor and the volunteers who defend our nation.”

Though McCain was not physically present during Inhofe’s tenure as acting chairman, the two senators did coordinate at times. From his Arizona home, McCain issued statements and co-sponsored legislation in his final months as a 31-year senator.

Inhofe, for example, helped shepherd through the $715 billion National Defense Authorization Act, which sets policy and spending for the Defense Department.

On Wednesday, the Senate Armed Services Committee officially chose Inhofe to become the permanent chairman for the panel. Inhofe said he was looking forward to working with his colleagues on the committee to ensure the military is ready and able to defend the country against growing threats around the world.

“I am deeply honored that my colleagues have selected me to lead the Armed Services Committee,” said Inhofe, who has served on the panel since 1995. “America is facing new and unprecedented threats that are different from anything we’ve seen before. As chairman, it will be my priority to address these threats while maintaining a staunch commitment to servicemembers and their families, as well as continue the bipartisan tradition of rigorous accountability and oversight of the Defense Department.”

McCain’s seat in the Senate was also filled this week, and could remain part of the Senate Armed Services Committee.

On Tuesday, Arizona Gov. Doug Ducey appointed longtime McCain friend and former Sen. Jon Kyl to take over the Senate seat at least for the coming months. Kyl, who served as a congressional lawmaker from Arizona from 1987 to 2013, said he would not run for election to the seat. He was sworn into the Senate on Wednesday.

McCain was elected in 2016 to a six-year term, which must be filled by appointment at least until a special election is held for the seat in 2020.

McConnell said Wednesday that Inhofe has the right experience to lead the Senate Armed Services Committee.

Inhofe “possesses rich experience on the committee, including decades of work on behalf of American servicemembers, as well as his own military service,” McConnell said. “So our congratulations and our thanks are with Senator Inhofe.”

Based on Armed Services Committee hearings in recent months, the move could likely bring a dramatic shift from McCain’s passionate and energetic leadership, which sometimes turned contentious when he questioned Pentagon officials.

McCain’s quick temper and frustration with military leaders, such as his probe into the deaths of 17 sailors in two fatal Navy ship crashes last year, or his grilling of Pentagon nominees or leaders, was a frequent staple of committee hearings.

James Mountain Inhofe, on the other hand, is more soft-spoken and not known to question witnesses relentlessly during hearings to the degree that was commonplace for McCain.

He has a more conservative record than McCain, denying global warming as a “hoax” and pushing against same-sex marriages.

For example, in 2012, Inhofe authored a book titled “The Greatest Hoax: How the Global Warming Conspiracy Threatens Your Future.”

That same year, he cosponsored legislation to prohibit same-sex marriages on military bases. In 2015, Inhofe said he was disappointed by a Supreme Court decision requiring all states to recognize same-sex marriage.

“My position on this issue is clear and has not changed,” Inhofe said in a statement at the time.

Inhofe worked as a businessman for about 30 years before becoming the mayor of Tulsa in 1978 and then a congressional lawmaker in 1987. Inhofe, who served in the Army for two years from 1956 to 1958, joined the Senate in 1994.

Inhofe is also known to speak highly of President Donald Trump, while McCain and Trump were well-known adversaries. Trump often mocked McCain, saying the Arizona senator, who spent five years in a North Vietnam prison, was not a war hero.

The friction continued after McCain’s death when the White House bucked tradition and raised its flag from half-staff to full-staff within two days of McCain’s death. After controversy ensued, the flag was lowered to half-staff again until after the senator’s burial, which is tradition.

Inhofe said McCain was partially to blame for the flag dispute.

“I think that John McCain was partially to blame for that because he is very outspoken,” Inhofe said during a hallway interview with reporters on Capitol Hill. “He disagreed with the president in certain areas and wasn’t too courteous about it.”