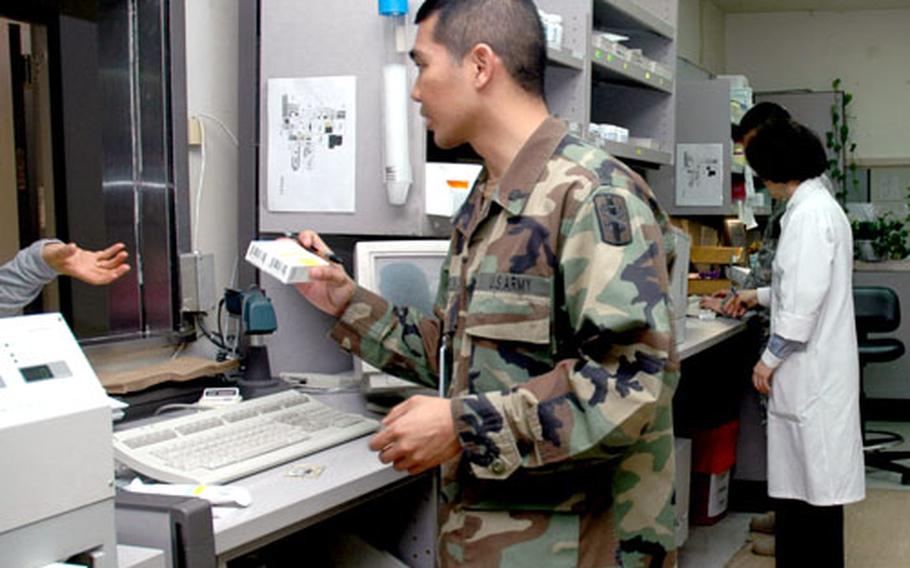 A soldier hands medicine to a customer Thursday at the pharmacy inside the 121st General Hospital on Yongsan Garrison. Last month, a nationwide shortage of an asthma and allergy drug caused the supply of inhalers for U.S. Forces Korea to dwindle to less than two dozen, according to 18th Medical Command officials. (Teri Weaver / S&S)

A nationwide shortage caused the dwindling supply here, according to Lt. Col. Octavio Mont, head pharmacist for the 18th Medical Command. Instead of 200 inhalers that the command had ordered, a box of 24 arrived in mid-March, he said.

The timing was unfortunate. The shortage came only a few days before a dense dust storm hit South Korea. On April 8, pollution levels in Seoul measured at a high of 2,281 particles per million in a cubic meter of air. U.S. officials consider 301 to 500 parts per million a hazardous health concern.

During the Albuterol shortage, no one left military pharmacies empty-handed, Mont said. Instead, pharmacists called doctors and asked for permission to substitute the beta-blocker medicine with similar drugs that can open breathing passages, he said.

Mont said pharmaceutical shortages are rare but can happen at military medical facilities. When they do happen, measures are in place to combat the shortages, he said.

Sometimes, such as in March, another drug can be substituted. Mont also has contacted other military medical units to share supplies. In a worse-case, emergency situation, medical officials here would turn to South Korean health officials for help, Mont said.

The 18th Medical Command has memorandums of understanding with almost 20 hospitals throughout South Korea to provide specialized care that is outside the scope of service at the 121st General Hospital in Seoul. Those understandings do not include sharing drug supplies between facilities, according to 1st Lt. Michael Schardinger.

In an extreme case, however, the 18th Medical Command would feel comfortable looking to the South Korean medical community for assistance with drug supplies, Mont said.

Officials said the shortage lasted about three weeks but they now are fully supplied with Albuterol.