Ingros takes over for Crowe as head of 728th MP Battalion 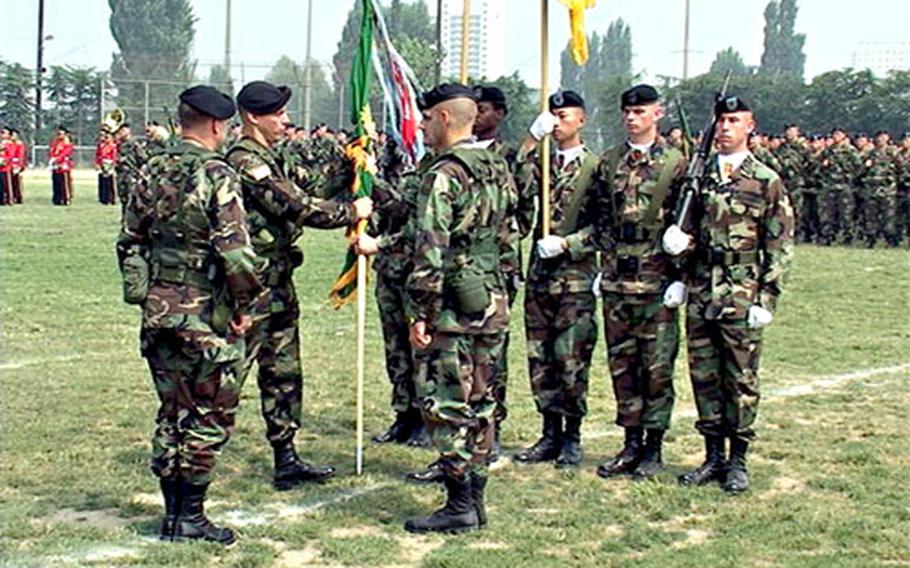 Last October, the unit sent 68 soldiers to Iraq for 110 days. They were assigned to prison duties at Camp Bucca, an internment facility for suspected insurgents near the port of Umm Qasr in southern Iraq.

Crowe, a Gulf War veteran and graduate of the FBI National Academy, retires after 21 years of Army service. He plans to move to his native North Carolina and teach Junior ROTC at a high school in Hickory.

Col. Falkner Heard III, commander of the battalion&#8217;s parent unit, the 8th Military Police Brigade, praised Crowe for planning and executing &#8220;some of the best training in the brigade,&#8221; including live-fire convoy ambush training in Pohang &#8220;and much more,&#8221; Heard said.

&#8220;Given this quality of training, two platoons from the battalion were selected to support the global war on terror and deploy to Iraq,&#8221; Heard said. &#8220;It was there that your training program was put to the test and your soldiers successfully passed. All deployed and all came back.&#8221;

Crowe called the Warfighters in formation on Kelly Field &#8220;the best soldiers I have ever had the privilege to serve with in my career: aggressive, focused, mission-oriented and true warfighters. I am proud of you all.&#8221;

&#8220;Don&#8217;t forget what you learned and that the basics are the foundation of everything you do,&#8221; Crowe told them. &#8220;I pray you will never take counsel of mediocrity, settle for the status quo, and always strive to improve yourself in some way, every day.&#8221;

In brief remarks, Ingros told the battalion he was &#8220;honored today in joining your ranks.&#8221;

He also is a graduate of the Combined Arms Service Staff School, Army Command and General Staff College, and Army Ranger, Airborne and Pathfinder training, among other military qualifications.