Information-gathering tactics the key to winning 'intelligence war' in Iraq 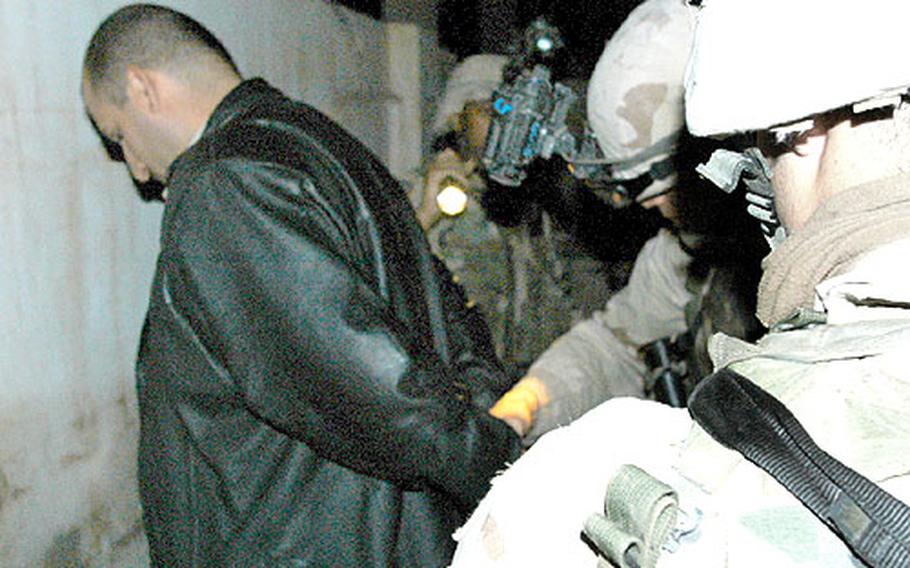 In a residential driveway in Baghdad, paratroops from the 82nd Airborne Division zip-cuff a suspect during a raid spanning Thursday night and Friday morning. (Franklin Fisher / S&S)

In a residential driveway in Baghdad, paratroops from the 82nd Airborne Division zip-cuff a suspect during a raid spanning Thursday night and Friday morning. (Franklin Fisher / S&S) 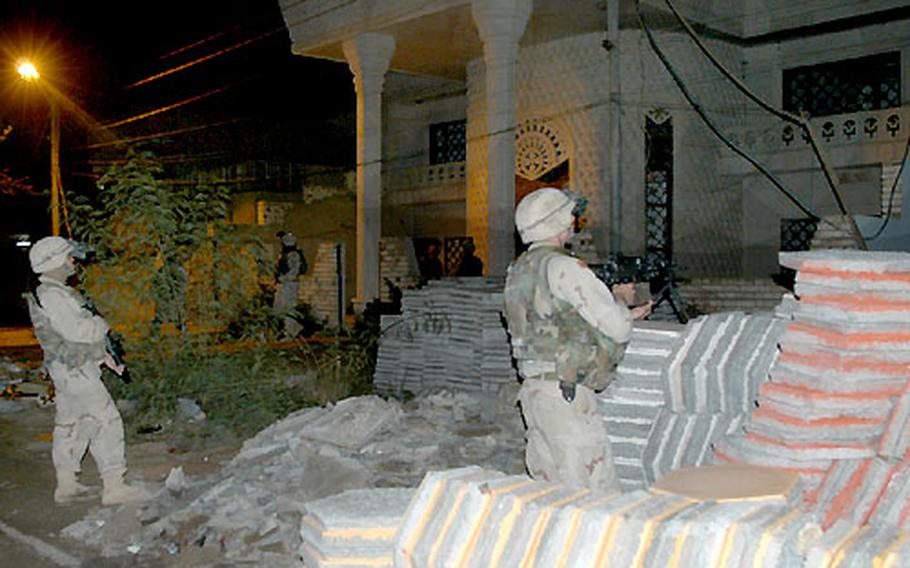 During a large raid in Baghdad, Iraq, paratroops keep watch outside a suspect’s house while fellow soldiers search inside. The house was one of three the Company D soldiers hit early Friday morning. Company D troops did not detain anyone from this house. Overall, the operation netted 14 detainees, coalition officials said. (Franklin Fisher / S&S) 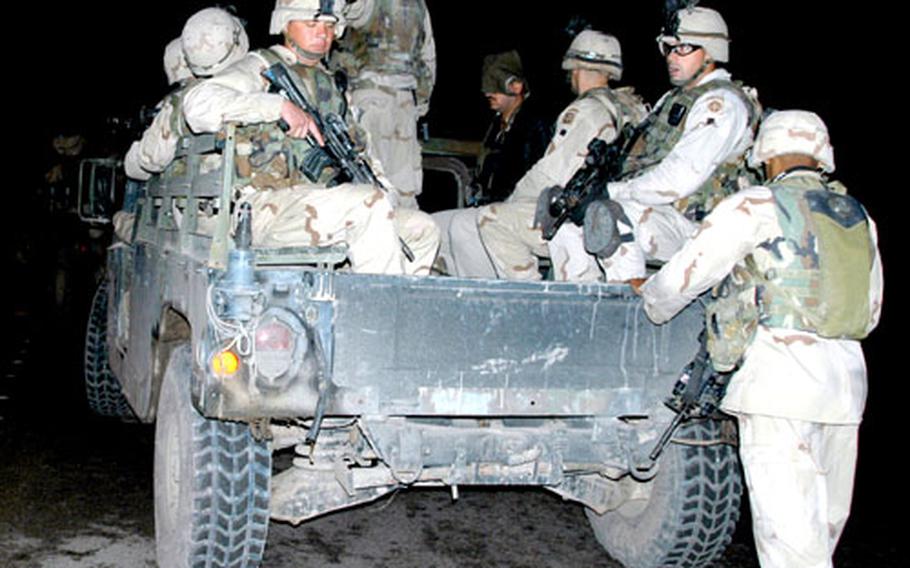 Paratroops from the 82nd Airborne Division hold a detainee in their Humvee during a night of raids early Friday in the Al Rashid district of Baghdad, Iraq. More than 1,000 troops took part in the raids, which sought the capture of 20 suspects in local crime activity and in the guerrilla insurgency being waged against coalition forces. These troops are with the division’s Company D, 3rd Battalion, 325th Airborne Infantry Regiment, part of the 2nd Brigade Regimental Combat Team that includes members of the 1st Armored Division. (Franklin Fisher / S&S)

BAGHDAD, Iraq &#8212; Apache helicopters flew past in the cold night sky as troops stood in the driveway with their suspect, waiting for the interrogator to come over.

They had pulled up in the darkness only minutes earlier with their Humvee lights out. In seconds, they had knocked down the gates, filed up the driveway and were inside the house.

They began searching rooms and questioning the owner, a tall, stocky man with a small mustache who said he had been a veterinarian for former Iraqi leader Saddam Hussein&#8217;s horses before the war last spring.

At the same moment, at many points around Baghdad&#8217;s Al Rashid district, similar raids were under way for 20 &#8220;named suspects&#8221; wanted in the guerrilla insurgency being waged by Saddam loyalists.

At about 20 minutes past midnight Friday morning, at this two-story house in Al Rashid&#8217;s Saydiyah neighborhood, the interrogator appears. He is Chief Warrant Officer 2 Michael Beard, assigned to the 313th Military Intelligence Battalion.

What followed gave a glimpse as to why coalition military leaders have said the Iraq conflict has become largely an &#8220;intelligence war,&#8221; one that relies on questioning detainees and informants for names and whereabouts of suspects, then moving quickly to capture them.

Beard, like the rest of the troops, wears a desert-tan uniform, Kevlar helmet and flak vest. With him is an Arabic-speaking paratrooper of Tunisian descent who will act as interpreter. The suspect has put on a black leather jacket before coming outside.

Beard starts with a series of names of people he wants more information on. His demeanor is low-key, self-contained, but purposeful.

Beard gives him another name, and the suspect says he understands that the person is a former member of Saddam&#8217;s secret service.

Each time the man answers, Beard listens to the translation, then asks his next question.

The suspect seems uneasy over the Saddam questions and says little more than, &#8220;I think Iraq would be better off with the U.S. troops.&#8221;

After about 10 minutes, Beard appears satisfied.

He gives no resistance, shows no anger or surprise. They sit him in the back of an uncovered Humvee, a hoodlike covering over his eyes.

He was one of three suspects the troops of Company D, 3rd Battalion, 325th Airborne Infantry Regiment, have been assigned to capture as their part in the night&#8217;s raids. During questioning in the driveway, he gave them the address of one of the listed suspects. They hit two other locations, but found no other suspects.

The night&#8217;s operation was the latest round in the 1st Armored Division&#8217;s Operation Iron Justice, launched Dec. 1 to curb corruption, stem the flow of money to the pro-Saddam insurgency and reduce criminal activity &#8212; kidnappings, carjackings and other violence that has left many Iraqis feeling unsafe.

&#8220;We are certain that we took some bad characters out of Baghdad,&#8221; said Maj. Frank Zachar, operations officer with the 82nd Airborne Division&#8217;s 2nd Brigade. &#8220;It also shows the people of Al Rashid that we are here, we are providing security and that we can attack anywhere, anytime and with more force than they can imagine.&#8221;

&#8220;We basically have 120 soldiers out there that had weapons, ready to kill people and they basically applied every amount of restraint so they could &#8230; go in and try to find these individuals,&#8221; said Capt. Jeffrey Sheehan, Company D&#8217;s commander.

Beard planned a formal interrogation of the veterinarian later in the day Friday, he told Stars and Stripes after the raid.

His questions in the driveway had more preliminary aims.

&#8220;What I was trying to do was just assess him,&#8221; said Beard, &#8220;not so much for the information, not that I really cared at that moment what he did before the war, but just for cooperativeness &#8230; and to see whether he was going to be evasive about certain subjects.

&#8220;We questioned him concerning possible links to other suspected members of anti-U.S. groups,&#8221; Beard said. &#8220;A lot of the questions we asked serve two purposes. One would be just to gather information. The second would be to try to assess whether or not he&#8217;s being truthful.