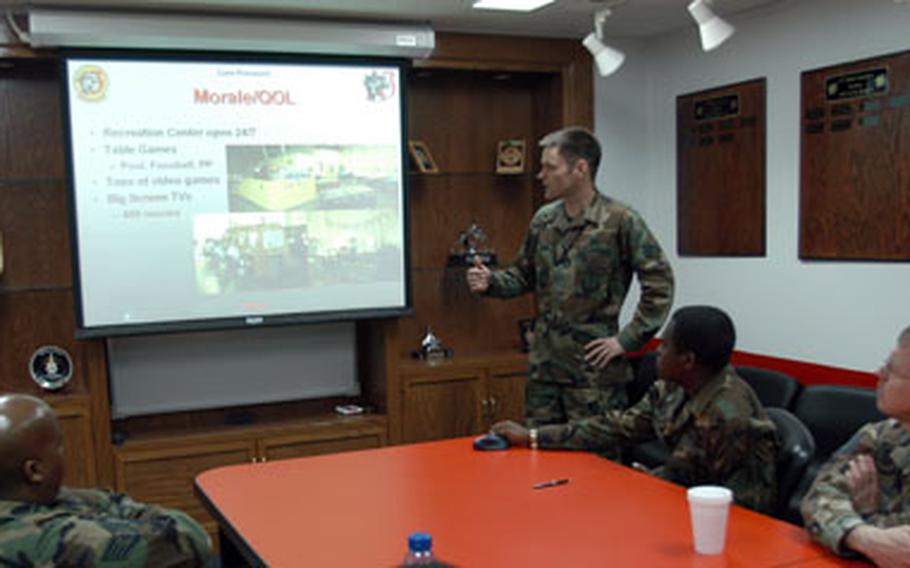 Before they even step foot in Iraq, airmen with the 13th Fighter Squadron will know how long it takes to walk from where they sleep to where they eat.

And, if they&#8217;ve been paying attention, tucked in their military-issued duffle bags will be extra hangars and a battery-powered alarm clock.

This month, the 13th Fighter Squadron will replace the 14th Fighter Squadron at Balad Air Base, 40 miles north of Baghdad. The F-16 squadrons, both assigned to Misawa, are swapping the job of providing close-air ground support to coalition forces in Iraq.

Integral to preparing for the four-month deployment is information: Information about what to expect, from the certainty of mortar fire overhead to the quality of mess hall meals.

That knowledge comes from the squadron&#8217;s information gurus, who work in military intelligence.

Since mid-March, they&#8217;ve been putting the squadron&#8217;s enlisted airmen through a deployment reality check once a week, sharing with them some of the information they brief the pilots on daily about the situation downrange.

The weekly briefings can be a history lesson, looking at the roots of the sectarian violence in Iraq. &#8220;I think it&#8217;s important to have a foundation on why they&#8217;re fighting in the first place,&#8221; Sheets said.

But mostly they focus on what life at Balad will be like. During a recent briefing, airmen were told to expect daytime temperatures of 95 to 111 degrees Fahrenheit and wind gusts up to 50 mph. But the harsh elements are balanced somewhat by hearty meals of lobster and steak at dining facilities stocked with a salad bar and free Gatorade.

The airmen also get versed in threats &#8212; in this case, dangers inside the wire, since most of them won&#8217;t be leaving Balad during the deployment. Sheets said the base is attacked regularly by mortars &#8220;so we let them know about that.&#8221;

The briefings have included helpful tips from the 14th Fighter Squadron: Bring hangars, a battery-operated alarm clock and consider mailing items ahead of time instead of lugging heavy bags.