Informal service: In the Israeli military, gays serve openly, women can let their hair down and everyone is on a first-name basis 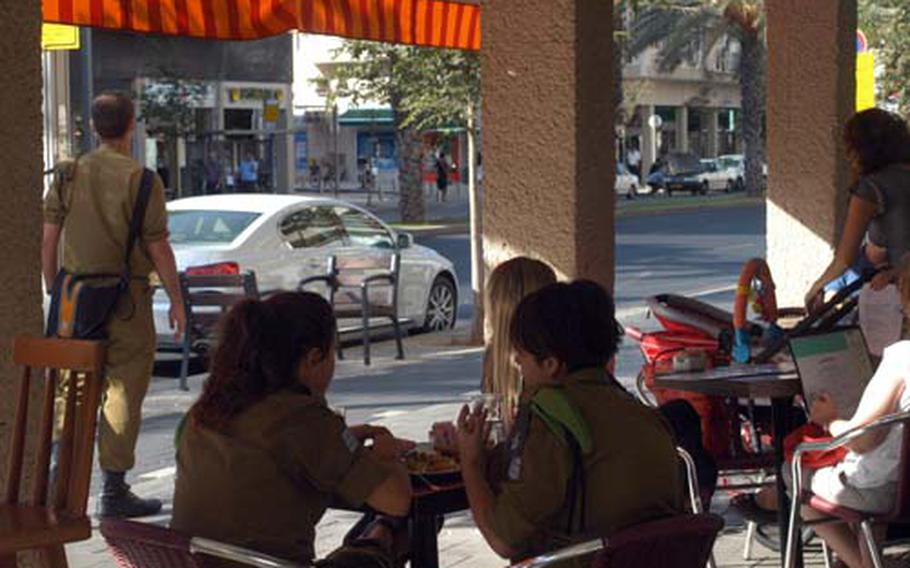 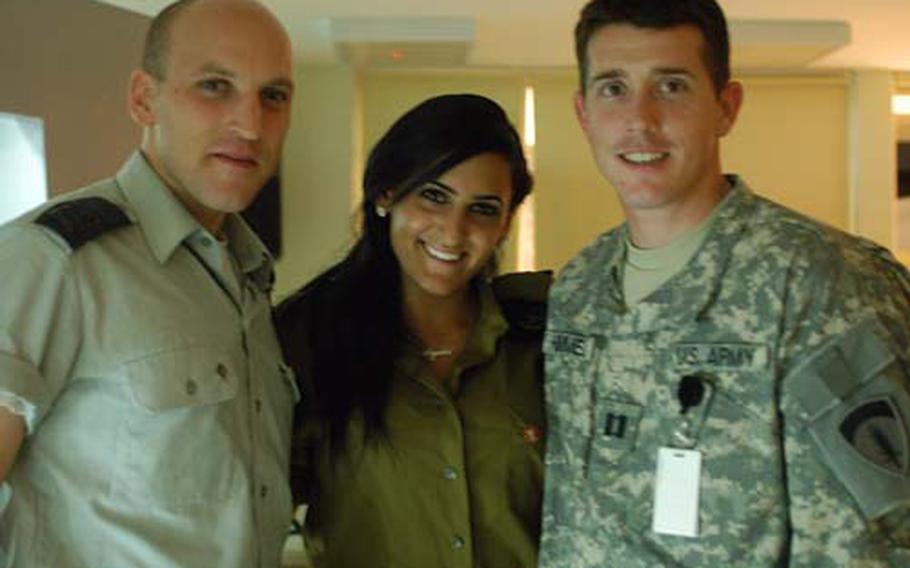 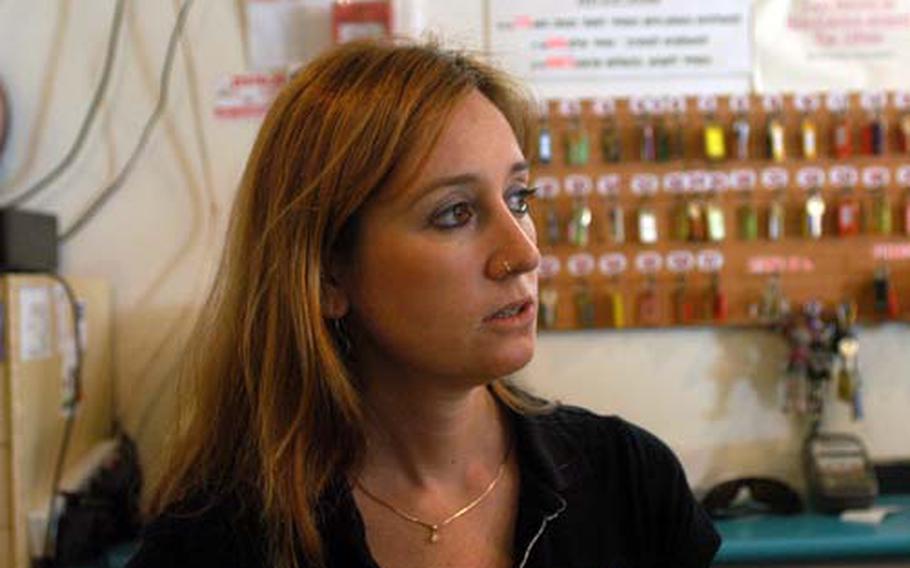 Maya Cohen was in the Israeli army a decade ago, working as a secretary. She said she was proud to do her compulsory service and viewed anyone who did not serve with disdain. (Nancy Montgomery / S&S) 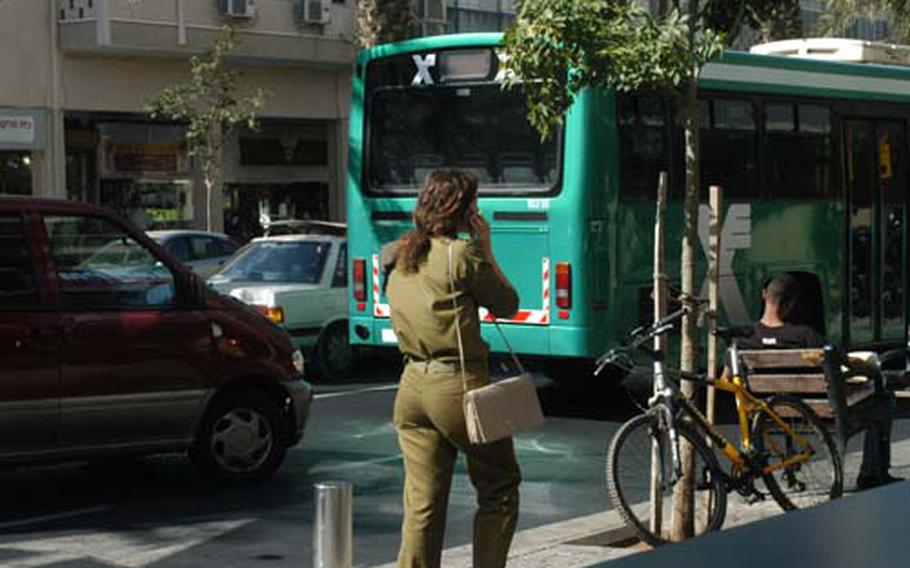 Israeli troops are a visible presence throughout Tel Aviv and Jerusalem -- including female soldiers with their hair in a ponytails and their uniforms tailored to fit just so. (Nancy Montgomery / S&S)

Their hair hung down their backs in loose, fetching ponytails.

&#8220;How is the mask going to fit over it?&#8221; asked U.S. Army Sgt. Delvona Maria, a practical-minded chemical specialist with the 5th Battalion, 7th Air Defense Artillery, who, like many U.S. female soldiers, wears her hair pulled tightly back and pinned up. &#8220;How would you get a seal?&#8221;

And the Israeli women sported sandals on their feet, with nicely painted nails.

The young women&#8217;s uniforms consisted of trim shirts tucked into hip-huggers &#8212; some of them tailored to fit just so.

&#8220;We&#8217;re not going there,&#8221; said Lt. Col. Kevin Ciocca, the commander of the battalion that recently spent three weeks in Israel on a missile defense exercise.

The Israeli women&#8217;s appearance reflected just one of the differences between the military forces of a long-standing alliance: the U.S., in which all troops are volunteers, and Israel, the only Western power and one of a handful of countries that conscripts women as well as men.

The Israeli Defense Forces, or IDF, are a central part of a country formed as a home and refuge in disputed lands 61 years ago, after 6 million Jews had been killed in the Holocaust. At war continuously since then with the Palestinians they displaced, and viewed as having no right to exist by neighbors such as Iran, Israeli society has been built partly on the idea that projecting superior military strength is key to its survival.

Jewish Israelis are drafted at age 18, their unit assignments decided by a battery of tests and interviews they undergo in high school. Men must serve three years; women, usually two.

Although ultra-orthodox Jews seek deferments on religious grounds, and the number of all Israelis seeking deferments has grown in recent years, most serve willingly, part of what they see as a sort of sacred duty.

Unlike college-educated U.S. officers, those entering the IDF become officers straight out of high school, based on their preconscription tests and completion of officer school. The school has a high attrition rate, and those who are dropped serve their time as enlisted soldiers.

But rank isn&#8217;t as important as it is in the U.S. armed forces. Soldiers and their commanders call each other by their first names, a big contrast to the way U.S. troops address their leaders.

With the exception of the Druze community living in northern Israel, Arab Israelis are not subject to the draft, and few volunteer.

That reinforces social inequalities in a country where military service is highly rewarded.

&#8220;Citizens who do not perform military service enjoy less access to social and economic benefits,&#8221; a U.S. State Department report in February pointed out.

Feminists, too, long criticized the IDF as a sort of men&#8217;s club that offered power and privilege.

&#8220;For decades, it was widely accepted that some of Israel&#8217;s top military officers and government ministers considered sexual encounters with female employees a seigniorial right,&#8221; according to a 2006 New York Times report.

In 1998, Israel passed a sweeping sexual harassment law, inspired in part by American legislation, and the situation for female soldiers has improved.

When she served about a decade ago, Cohen said, she worked as a secretary for a female officer and did not experience sexual harassment. Still, she said, women were &#8220;not at all equal.&#8221;

Women first began entering pilot training in the U.S. in 1974, and were allowed to become fighter pilots in 1993.

But just as in the U.S. military, most combat positions remain closed to women, which women&#8217;s advocates say harms their chances for advancement.

But unlike in the U.S. military, gay people are expected to serve, and do so openly.

&#8220;I know a few gay people in the army and people knew and their commanders knew and it was not a problem,&#8221; Altmann said. Still, he said, they did not serve, as far as he knew, in the infantry.