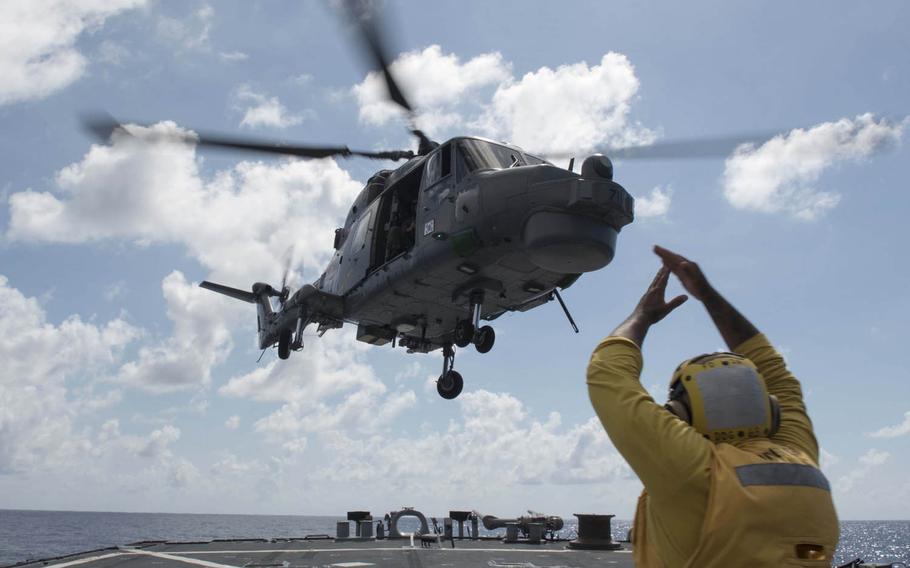 Boatswain's Mate 2nd Class Donte Ruffin signals to a South Korean helicopter as it takes off from the guided-missile destroyer USS Stethem in the South China Sea, May 6, 2016, during the at-sea phase of the ASEAN Defense Minister's Meeting. (Joshua Fulton/U.S. Navy)

South China Sea tensions will likely be a hot topic when Secretary of Defense Ash Carter meets with the 10-member Association of Southeast Asian Nations later this month in Hawaii.

The informal talks will “follow up on prior commitments and discuss common interests and regional security,” U.S. Pacific Command announced Monday.

The discussions will be co-hosted by Laos, whose prime minister was ASEAN’s chairman until the yearlong job was passed to new Philippines President Rodrigo Duterte earlier this month.

The dispute over sovereignty of portions of the South China Sea has been a central issue at ASEAN meetings in recent years. China maintains an ambiguous claim to about 90 percent of the sea, a position that puts it at odds with several of its neighbors over rights to the small islands there, and with the U.S. over transit through international waters.

In recent years, China has added thousands of acres of landfill to reefs and rocks, some of which now host self-propelled artillery and airfields capable of supporting a variety of military aircraft.

As China’s growing naval power and regional ambitions have challenged America’s dominance in the Pacific, both nations have attempted to steer ASEAN in a favorable direction. The U.S. appointed a resident ASEAN ambassador for the first time in 2011, a move that was a part of the Obama administration’s strategic rebalance to the Pacific.

During an ASEAN meeting in Laos in July, representative — hampered by ASEAN rules requiring consensus — were deadlocked over the Philippines’ demand that any joint statement issued from the meeting mention a landmark ruling by an international tribunal rejecting China’s vast claims to the sea.

The deadlock was broken when the Philippines dropped its bid for a reference to the decision.

The Philippines had filed for arbitration under the provisions of the United Nations Convention on the Law of the Sea, to which China was a signatory. The tribunal determined that China had no right to build artificial islands atop reefs and shoals in the Spratly Island chain near the Philippines.

China has said it will not abide by the decision.

The ASEAN communique did make an oblique reference to China’s island claims and expansions.

“We remain seriously concerned about recent and ongoing developments and took note of the concerns expressed by some ministers on the land reclamations and escalation of activities in the area, which have eroded trust and confidence, increased tensions and may undermine peace, security and stability in the region,” the statement said.

Duterte’s ASEAN chairmanship could complicate America’s relationship with the organization. The president, elected in May, made headlines earlier this month when he promised to call President Barack Obama a “son of a bitch” when they were to meet in Laos.

Duterte backpedaled on the outburst, but has long expressed rancor toward U.S. military involvement in the Philippines.

On Monday, he said he wanted the small contingent of U.S. Special Forces stationed in the southern part of his country to leave, according to The Associated Press. The troops have been there for more than a decade, assisting the Philippines’ armed forces in combating jihadist militants.

On the other hand, Duterte’s new defense minister, Delfin Lorenzana, a retired major general with a lengthy and hands-on relationship with the U.S., may have a leavening effect on the firebrand president.

From 2004 to 2015, he was special presidential representative for veterans’ affairs at the Philippine embassy in Washington, D.C., where he lobbied for benefits for Filipino soldiers who served in the U.S. Army during World War II, according to his official bio on the government’s website.

He was also the defense and armed forces attaché from 2002 to 2004, overseeing the bilateral relations between the Philippines and the U.S. in regard to military exercises conducted under the Visiting Forces Agreement.

Lorenzana is expected to play a major role in the implementation of a recent agreement for U.S. troops to begin rotations through five military bases in the Philippines as part of the Enhanced Defense Cooperation Agreement announced last winter.