Infantrymen aim to be masters of the craft 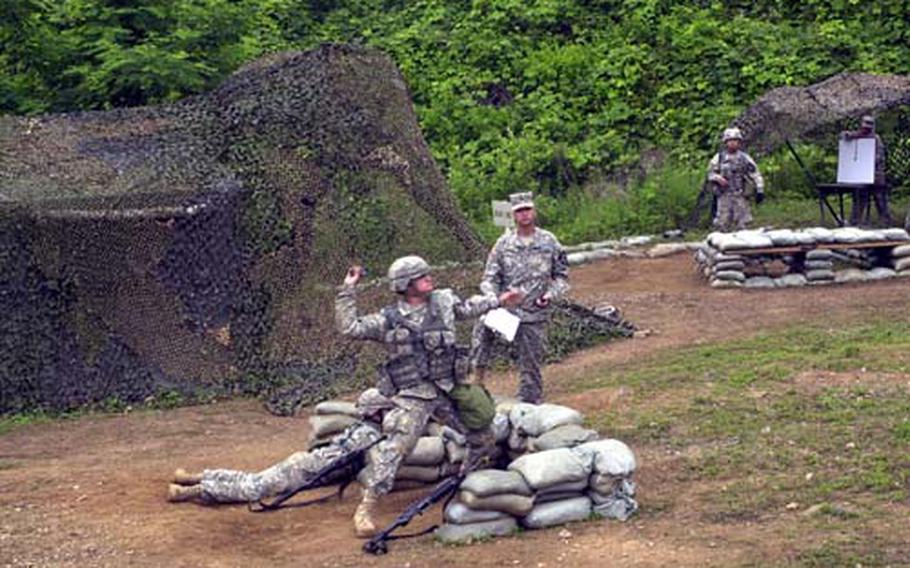 Pvt. Remington Herrera throws a grenade at a target area as part of his effort to earn an Expert Infantry Badge this week at Camp Casey. (Jon Rabiroff / S&S)

Pvt. Remington Herrera throws a grenade at a target area as part of his effort to earn an Expert Infantry Badge this week at Camp Casey. (Jon Rabiroff / S&S) 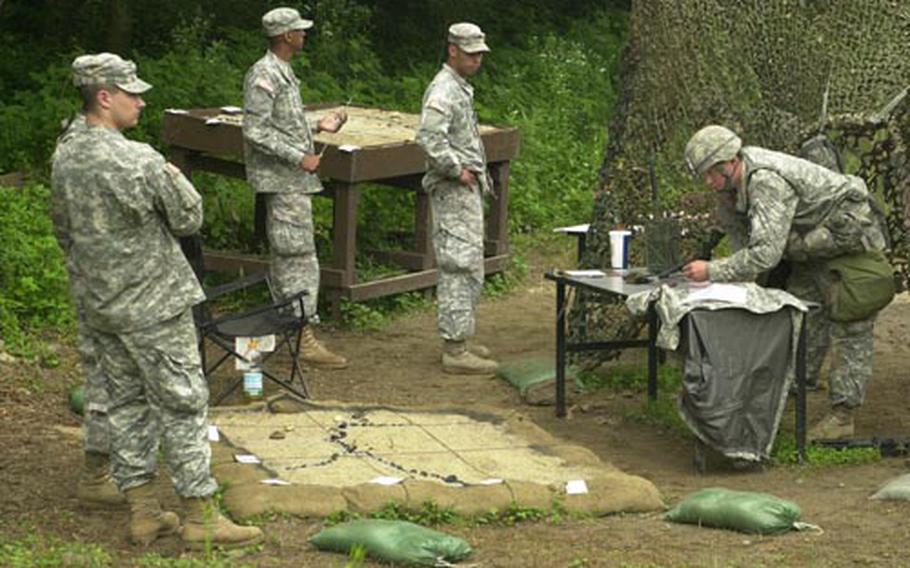 A candidate prepares to call in indirect fire on a target during Expert Infantry Badge testing Wednesday at Camp Casey. (Jon Rabiroff / S&S) 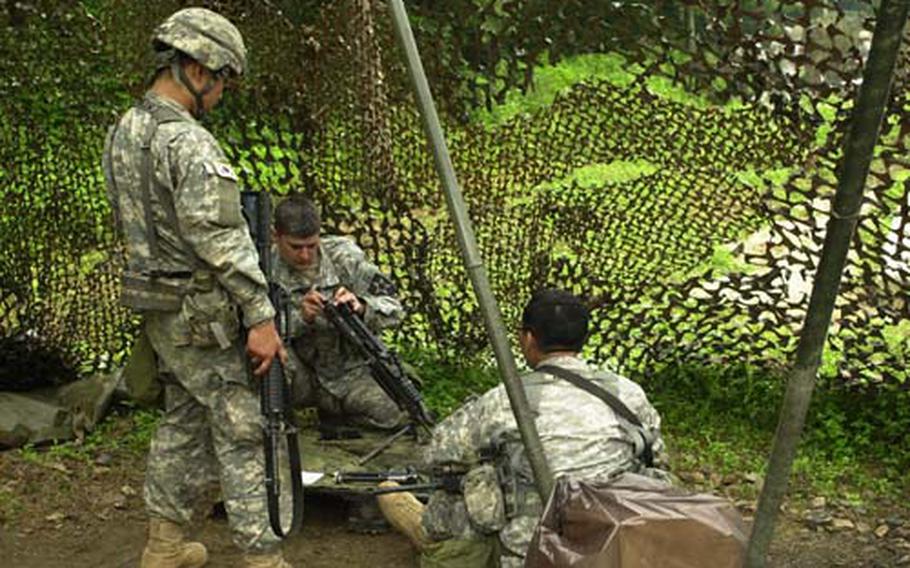 Soldiers practice taking apart a weapon and putting it back together during Expert Infantry Badge testing this week at Camp Casey. (Jon Rabiroff / S&S)

CAMP CASEY, South Korea - One shot to get it in the hole for all the marbles.

Tiger Woods lining up a putt at a major golf tournament?

No, Spc. Kyle Loose of the 2nd Battalion, 9th Infantry Division, preparing to throw his last grenade into a foxhole about 50 feet away as part of his effort to earn an Expert Infantryman Badge.

Loose hurls the grenade, which travels about two-thirds of the way on the fly, after which it bounces and starts to roll past the trench, only to take a right turn of sorts &#8212; a break in the green if you will &#8212; into the left side of the hole.

Success. Loose is still alive for the coveted hardware.

"It feels good," Loose said after the throw, suggesting that it would have been "pretty crappy" if his bid for a badge was foiled by a couple of bad grenade bounces.

Loose was one of 369 infantry and Special Forces soldiers from all over South Korea who came to Camp Casey this week in hopes of earning EIBs, an honor that the coordinator of the annual competition said has lost a little of its luster in the eyes of some because of the wars in Iraq and Afghanistan.

"Over the past five years, I think the focus has gone away from the EIB, just due to the vast amount of personnel running around with [Combat Infantry Badges]," he said.

Johnson stressed that he is proud of the CIB he earned and has nothing but respect for those who wear it, but there remains a special place in his heart for the EIB.

"My point of view is every infantry soldier who goes into combat receives a CIB," he said. "You don&#8217;t have to be a master of anything. You just have to be there.

"When you look and see someone with an Expert Infantry Badge, you know that&#8217;s a guy who&#8217;s mastered his craft," Johnson said, pointing out that historically only about 20 percent each year succeed in their bids for EIBs.

To even get to Camp Casey this week, EIB candidates had to pre-qualify by passing a land-navigation test and rating out as an expert with an M-4 or M-16 on a pop-up target range. The first day of EIB qualifying involved passing a physical fitness test &#8212; something 139 did not do this year.

Then, the competitors had three days to visit 21 testing stations and successfully complete 37 different tasks, ranging from administering first aid and calling in indirect fire to all kinds of weapons testing and the unpredictable grenade toss. EIB candidates are allowed two second chances, or mulligans, along the way.

Those who survive then face the final test &#8212; a 12-mile ruck march that must be completed within three hours.

Pfc. Michael Barbagallo of the 1st Battalion, 72nd Armor Regiment, was about halfway through the 21 stations Wednesday. Despite lingering fears about any of the challenges ahead that involved "grids and math," he was already daydreaming about earning an EIB.

Asked what it would mean, he responded, "You&#8217;re an expert in the field you chose to go into. You know everything. You can do your job efficiently."