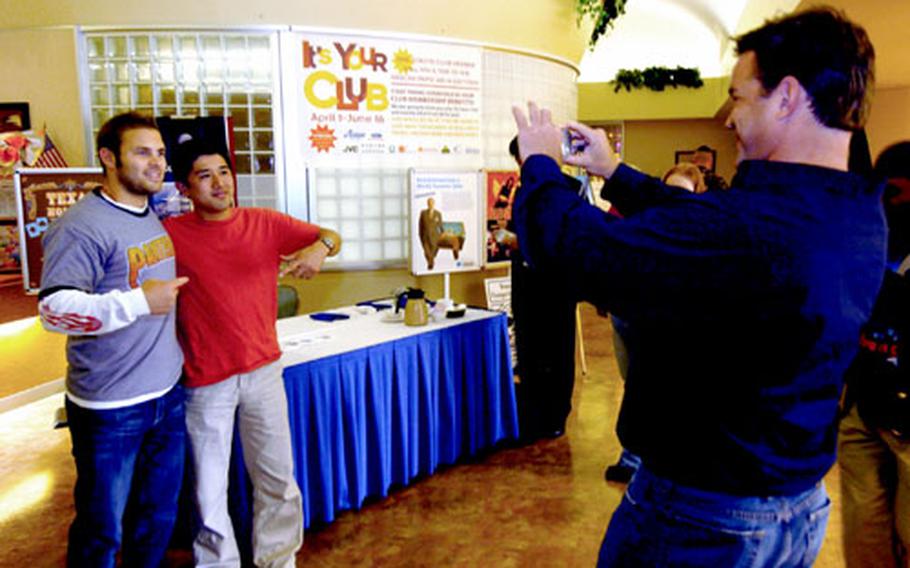 Indy car driver P.J. Chesson, who signed autographs for military members and their families, mugs for the camera in the Enlisted Club at Yokota Air Base, Japan, on Tuesday. (Christopher B. Stoltz / S&S)

YOKOTA AIR BASE, Japan &#8212; Indy Racing League Series rookie P.J. Chesson says he might&#8217;ve been a fighter pilot if he hadn&#8217;t first been lured by the thrill of going 215 mph on the famed Indianapolis Motor Speedway brickyard.

Both Chesson and Wheldon are in the field for Saturday&#8217;s Indy Japan 300 at Twin Ring Motegi, the year&#8217;s third race. Driver of the No. 91 blue and white Honda Dallara, Chesson finished 17th in the Honda Grand Prix of St. Petersburg and 12th in the season-opening Toyota Indy 300.

In Japan for the first time, the tattoo-sporting Chesson signed autographs and met lunchgoers at the Yokota Enlisted Club on Tuesday. Earlier, he was a guest on Eagle 810&#8217;s Retro Caf&#233; and also dropped by the Samurai Caf&#233; Dining Facility to mingle with troops.

Chesson, a member of the new Hemelgarn team co-owned by NBA star Carmelo Anthony, is expected to battle Marco Andretti and Jeff Simmons for 2006 rookie of the year honors.

Simmons will debut this weekend in the Rahal Letterman No. 17 car, the same one driven by Paul Dana, who was killed in a crash before the March 26 season opener at Homestead-Miami Speedway.

Chesson said Dana&#8217;s failure to react during seven seconds of visual and audible warnings about a damaged car on the track remains a mystery.