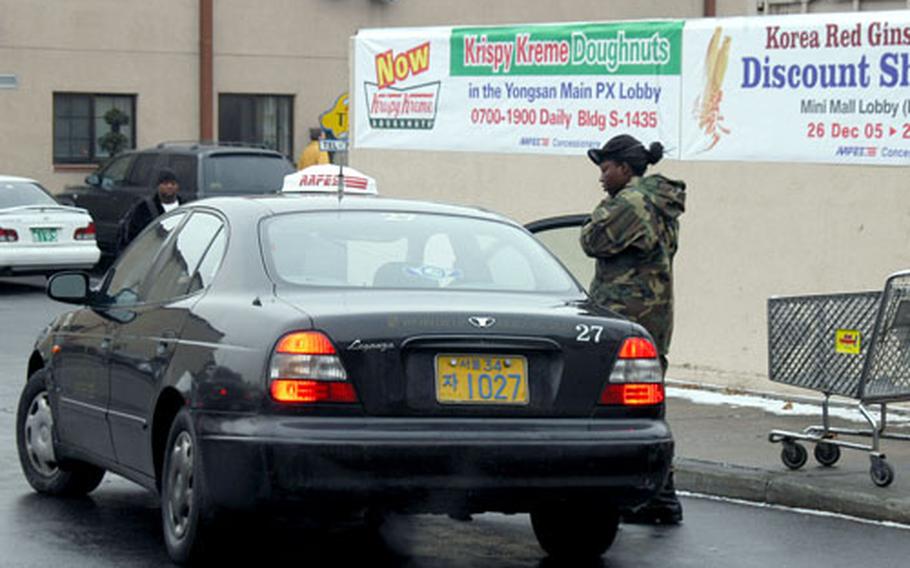 A soldier gets into an AAFES taxi cab outside the Post Exchange store on Yongsan Garrison. One suggestion from the family planning meeting for Area II was to ask AAFES to use zoned fares for on-base and off-base rides. AAFES officials said they cannot charge fees based on zones; the South Korean government requires taxis to run on meters. (Teri Weaver / S&S)

YONGSAN GARRISON, South Korea &#8212; Wouldn&#8217;t it be nice &#8230; individual thermostats in servicemembers&#8217; barracks, an opportunity for more family members who aren&#8217;t Korean or American to get jobs on post, cheaper taxi fares for on-post rides, less crowded restaurants during lunchtime?

It&#8217;s not a list for Santa, but a list of suggestions from the fall Army Family Action Plan meeting, according to Army Community Services officials.

At the October meeting, participants brainstormed improvements for quality-of-life issues for Area II servicemembers and their families. In the end, the collection of soldiers, officers, family members and other participants came up with more than a dozen ideas that would make living here a little easier.

One of those costly ideas involves putting individual thermostats in each barracks room, said James Greene, who works at Family Support and ran the meeting this fall.

Other ideas included giving more directions to family members who are issued &#8220;non-combatant protective equipment&#8221; like gas masks, Greene said. Some wanted housing officials to give a short training session on the South Korean real estate market to newly arrived soldiers and workers who must look for off-post housing.

Now that the suggestions have been identified, the next step involves passing along the ideas to the proper group &#8212; such as Army and Air Force Exchange Service, Area II&#8217;s Public Works Department, housing &#8212; for feedback. Those groups are scheduled to report the feasibility of the ideas to Col. Ron Stephens, the Area II commander, by mid-January.

Lunchtime on Yongsan proved another popular topic. One suggestion was to have additional, mobile lunch wagons to ease the crowded fast-food chains and restaurants on base, especially during the school year when high school students also use the local eateries, Greene said.

The teen group, which met separately from the adult action plan, also suggested lunch menus at Seoul American Middle School be more diverse and cheaper. Lunches now cost $2.20, according to AAFES. Many schools also have &#8220;a la carte&#8221; items for sale but those can vary from school to school, according to Master Sgt. Donovan Potter, an AAFES spokesman.

As for the zoned taxi fares, that idea might prove impossible to implement. In South Korea, all taxis must use a meter system, according to Potter. &#8220;The AAFES taxi service must follow Korean regulation that requires service to be metered,&#8221; Potter said through an e-mail.